Even picture-perfect couples who seem to have it all argue. What happens when one half of the couple confides in you, but you work for the other? RoseMarie Terenzio, executive assistant to the late John F. Kennedy Jr. and author of Fairy Tale Interrupted: A Memoir of Life, Love, and Loss, shares how she handled being caught in the middle of one such fight between John and Carolyn Bessette.

My friendship with Carolyn was about more than shopping sprees and trips to the hair salon. She and I shared a bond in that we both lived in John’s unique world—although, obviously, in very different ways. I was often the only person who could relate to what she was going through. “I know this is kind of sad, but there’s no one else I can talk to,” she said one night, having fled to my studio after an argument with John. I could certainly relate; the burden of being close to someone so famous meant you had to watch everything that came out of your mouth. But Carolyn recognized that her visit put me in an awkward position as his assistant. “Don’t tell him I came here,” she said. “I don’t want him to feel uncomfortable that I talked to you.”

First thing in the morning, I walked into John’s office and told him where Carolyn had been the night before.

“Look, you can get mad about this and have a huge fight with her, but she’ll think I’m a tattletale trying to cause trouble,” I said to John. “If you cause a rift between us, it’s going to make your life harder and mine a living hell.”

I told John the truth because, I reasoned, if Carolyn had decided to tell him herself, he might have wondered what else I wasn’t telling him, and someone in my position couldn’t afford that. I didn’t want to get in the middle, but I was trying to be honest with both of them and also protect myself.

After talking to John, I returned to my desk and called Carolyn.

“Hey, sweetie, just in case John brings it up, I told him you came over last night to hang out.”

“He probably would have dragged it out of you somehow.”

We both knew that wasn’t true, but it signaled that she understood the boundaries: no matter how much I cared about her, my allegiance was to John. Ultimately, she knew that because John could trust me completely, so could she.

More than anyone else, Carolyn saw how fiercely loyal I was and the extent of my work for John, and because of it, she loved me and was one of my biggest advocates. We were a pretty good team, too. Sometimes she would call me in the morning before John had made it into the office to give me a heads-up on the state of his mood and the reasons for it. If he had an issue with me—such as, I was spending too much time answering the phones and not concentrating on drafting an important letter—she let me know. I was already adept at reading John, but Carolyn made me seem like a genius. 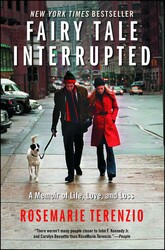 Working Girl meets What Remains, this is the behind-the-scenes story of an unlikely friendship between America’s favorite First Son, John F. Kennedy, Jr. and his personal assistant, a blue-collar girl from the Bronx.The Kennedys have captured the American imagination for fifty years, and the public’s enduring fascination with Camelot continues to this day. Now, former personal assistant and dear friend of JFK, Jr. and Carolyn Bessette Kennedy, RoseMarie Terenzio has waited for more than a decade to share her unique, intimate, and extraordinary perspective of life behind the Kennedy curtain.Upon first meeting, RoseMarie was not immediately impressed with JFK, Jr. In an awkward yet comedic encounter, she walked into her office to find that John had begun dismissively boxing up her personal belongings and moving them to a smaller office, including her prized, autographed Howard Stern photo. As she gave him a piece of her mind, people stood around gaping that she would dare speak to JFK, Jr. that way. But John loved her moxie and eventually asked her to become his personal assistant and publicist—and years later she would become one of his closest confidantes, as well as Carolyn’s.  For five years RoseMarie witnessed John’s dating, politics, his marriage to Carolyn, and his untimely death. In her memoir, she blends her own story of a young woman who rose from an embattled childhood to follow her dream with amazing revelations about the man who has been the subject of unparalleled attention, sensationalism, adoration, and speculation.