Erika Jayne, a fan-favorite from the TV series THE REAL HOUSEWIVES OF BEVERLY HILLS, is ready to tell all. Jayne opens up about every aspect of her life, including what’s not broadcast on the show, in her first memoir, PRETTY MESS. She writes about the 30-year age gap between her and her husband, Tom Girardi, and how they are able to live a successful and happy life together.

About six months after I moved into Tom’s house in Pasadena, I got my most significant piece of jewelry. He took me out onto one of the balconies overlooking the lush backyard, got down on one knee, and asked me to marry him.

He presented me with a beautiful diamond engagement ring. Of course I said yes. After our engagement, Tom said, “Listen, I’ll buy you anything you want. I don’t care what it is. You name it. But I’m not wearing a wedding band. I never have, I never will. I don’t like it. It’s uncomfortable. Please don’t ask me to.”

I agreed to his request. Listen, a wedding ring does not have magical powers. It is not going to stop anyone from doing something. Whoever thinks his or her spouse is going to magically look down at their hand and all of a sudden not make a bad decision is a fool.

I don’t care if Tom doesn’t wear a wedding ring. He doesn’t mind if I don’t wear mine on occasion, either (though some people who watch the Real Housewives of Beverly Hills make a big deal about it every time they spot me without it).

Neither of us ever even thought to get a prenup. It never came up. Let’s be serious, Mr. Girardi knows the law so well that a prenup is not going to do shit. As any lawyer will tell you, there is always a way around a prenup, even if you think it is ironclad.

Tom was going to protect himself no matter what, and what did I need to protect? The little red convertible and trash bags full of clothes I rolled up with? At the time, neither of us really thought we’d ever need one.

We were married six months later, in January. Since it wasn’t a first marriage for either of us, we didn’t want to make the ceremony into a big ordeal. One day, I was at home and Tom called and said, “Judge Flynn can marry us today.” Judge Paul Flynn, who became famous for presiding over Snoop Dogg’s 1995 murder trial, is a good friend of Tom’s. He agreed to officiate.

I went down to the Gucci store and told Esther, the salesgirl I bought from all the time, I was going to get married later that afternoon. We picked out a long, silvery satin dress that was quite pretty.

Tom picked me up and we went over to the LA Country Club. Judge Flynn came off the golf course and put his robe on over his golf clothes to marry us in a small reading room in the clubhouse.

Tom’s best friend, Robert Baker, who defended OJ Simpson in his civil trial, was there with us to serve as a witness. Judge Flynn said to us, “I think you need two witnesses for a marriage.”

“Hold on one minute,” Tom said. He went into the bar looking for someone who could be our other witness. He saw Wayne Bohle, a fellow lawyer, and said, “Hey, Wayne. Erika and I are getting married. Can you come over here and be our second witness?” This was the first time I had ever met Wayne, but he sure did us a solid. Without him, Tom and I would still be living in sin.

Immediately, I started living Tom’s life. It was a great legal education. I sat in so many meetings, dinners, and talks with the very best legal minds. I went to the U.S. Supreme Court to watch a session. A friend of ours, who was attorney general for the state of California at the time, was arguing a case. Between the huge curtains in the court and the nine justices sitting in that great room, it was truly impressive.

Tom has always been very involved in politics. We would go to the Senate to meet people and talk to them on an intimate level. This was not the kind of meet and greet where you shake a politician’s hand and get a picture with him. (Yes, it’s almost always a him.) No, we would have dinner with the mayor and his wife, and we’d listen to what he thinks about the city’s homeless problem. We would have drinks with a U.S. senator, and she’d confide in us the problems the senators were having with the current administration. These were some great experiences.

It was a very busy and rewarding life for us. We’d be out most nights after work, socializing and attending events until around midnight. We’d drive home together and listen to murder mysteries from the thirties and forties on the radio. They were these old radio plays. We’d ride silently in the car, holding hands, trying to figure out who the killer or thief was. That was always one of my favorite rituals. I was so sad when they took those off the air.

Aside from being Tom’s legal sounding board and voice of the layperson at dinners, I served other important functions, too. At a business dinner with another couple, I would entertain the wife while Tom was trying to settle a case. I’ve had to do a lot of that. Since Tom does so much business in social settings, my job as his wife is to help him close the deal. I have to be charming to everyone, even when sometimes I’d rather be at home watching Oprah’s SuperSoul Sunday.

I enjoy being able to do that for him. I think that it shows that I care and want him to have fewer things to worry about. Getting him ready shows that I took the time to think of him. He’s not going do it for himself, so if he walks out of the house looking crazy, that makes us both look bad. I try to make sure that he always looks like a million bucks.

Think you’ve found the one? Here are 32 signs you have a future together and 24 signs that you don’t.

Excerpted from Pretty Mess by Erika Jayne with Brian Moylan. Copyright © 2018 by EJ Global LLC. Used by permission of the publisher. All rights reserved. 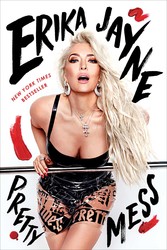 Without her alter-ego Erika Jayne, Erika Girardi says she’d just be “another rich bitch with a plane”—so get ready for the dishy, tell-all memoir from show-stopping performer, model, singer, and beloved star of The Real Housewives of Beverly Hills, Erika Jayne.Erika Jayne didn’t make it this far by holding back. Now, in her first-ever memoir, the fan favorite star of Bravo’s The Real Housewives of Beverly Hills bares her heart, mind, and soul. In Pretty Mess, Erika spills on every aspect of her life: from her rise to fame as a daring and fiery pop/dance performer and singer; to her decision to accept a role on reality television; to the ups and downs of family life (including her marriage to famed lawyer Tom Girardi, thirty-three years her senior). There’s much more to Erika Jayne than fans see on The Real Housewives of Beverly Hills. Pretty Mess is her opportunity to dig deep and tell her many-layered, unique, and inspiring life story. As fun and fearless as its author, this fascinating memoir proves once and for all why Erika Jayne is so beloved: she’s strong, confident, genuine, and here to tell all!