How soon should a man you’ve met on the web propose an offline get-together? Read on for advice on how not to let a man waste your time, from The Rules for Online Dating.

Ideally, you want a man to ask you out as soon as possible to move the relationship from the computer to a date. But you cannot tell him to do this or even hint it. On the other hand, you should not wait forever. We think four e-mails is enough. If, by his fourth e-mail, a man hasn’t suggested meeting, don’t e-mail him again. He may just need a “push” to ask you out — and by that, we don’t mean you should suggest to him that he ask you out. We mean you should simply drop out: Stop e-mailing him!

Most women hang in there way too long, sometimes as long as six months, waiting and hoping for a man to ask them out. We’ve heard of men who are still talking about politics, workout routines, and past relationships in their tenth e-mail. For whatever reason, they can’t get around to saying “Let’s meet” and following through with it.

Ed (Entrepreneur40) is a perfect example. He answered Suzanne’s ad (SassyGirl39) and she was thrilled, as he was not only handsome but seemed worldly as well. Never married and very particular, Ed thought Suzanne was attractive, but he was in no rush to ask her out. He asked her lots of questions, everything from the weather to hobbies and vacation spots. Suzanne was only too happy to answer every single one, all the time wondering if he was ever going to ask her out! She didn’t realize that by responding to him, she was preventing herself from getting a date.

Here are their e-mail exchanges over a period of three weeks:

FIRST E-MAIL:
Entrepreneur40: When I saw your ad, I thought, very pretty. I would have answered it sooner, but I had a top priority project to do. I’m an environmental engineer by day and an entrepreneur on the side, kind of a workaholic. Now that that’s done, I can concentrate on you. I have to say you look familiar. Where are you from?

SassyGirl39: I grew up in Buffalo, New York. I live in New Jersey now.

SECOND E-MAIL:
Entrepreneur40: You’re kidding. I went to college in Buffalo. SUNY-Buffalo. I skied there a hundred times. Worst snow storms I ever saw in my life. Do you like to ski?

SassyGirl39: I know, growing up I never took off my ski jacket and snow boots. I love to ski too. I have a ski share in Pennsylvania.

THIRD E-MAIL:
Entrepreneur40: I just got back from skiing in Italy, nothing like it. It was half business/half pleasure, two weeks. I could live there in a heartbeat. Have you been to Europe? Do you like to travel?

SassyGirl39: I lived in England on a semester abroad 20 years ago and France for work two years ago. I work in public relations for Hermes, the scarf company. But I’ve never been to Italy. Sounds wonderful, maybe someday. I love pasta, that’s for sure.

FOURTH E-MAIL:
Entrepreneur40: Me too. Fettucine Alfredo is my favorite. I know this great Italian restaurant we can go to sometime. What do you like to do for fun? I’m a gambling man myself. I go to Atlantic City five times a year. Won $500 last time, but lost $1,200 the time before that, but hey, it’s a blast. I stay at lavish penthouse suites, catch a few shows, spend some play money. Have you ever been to Las Vegas? Or maybe you’re an Atlantic City girl?

SassyGirl39: I’ve been to Atlantic City twice, saw Earth, Wind, and Fire once and a comedian another time, I forget his name, maybe Don Rickles, lost $25 in the slot machine both times, walked on the boardwalk. I don’t play cards. It was fun.

This is the e-mail Suzanne should never have sent, the point at which she should have just stopped corresponding with Ed. After four e-mails, it’s time for a man to ask you out. If he wants to find out what you like to do for fun, or about your career and family, then he should ask you face-to-face on a date.

Think of four e-mails back and forth between you and a man you’ve met online as the equivalent of a half an hour talking to a guy you’ve met in a bar or a party. If, after 30 minutes, he hasn’t asked for your number, you have to look at your watch and say, “Wow, I really have to get going,” or “My ride is leaving, I have to go,” in hopes that that will prompt him to ask for your number or risk never seeing you again. If you hang out all night waiting for him to ask for your number, you won’t be a challenge and he may never ask.

All Ed really needed was a Rules-y girl who would not give him hours of time, or, in the online world, someone who would not be content chatting so easily and indefinitely. Men think when you chat with them endlessly that you will chat with anyone endlessly and that you’re probably not very discriminating. A man should have to work hard on some level to get all this information out of you. He should at least take you out on a date!

Suzanne was too available online and not a challenge, so Ed lost interest. Although he did allude to taking her out for dinner, it was more of a “bookmark,” with no definite date. He did not follow up by asking her for her number. Instead, he changed the subject and asked even more questions. Had Suzanne stopped e-mailing him, he might have thought, “She won’t e-mail me back. I guess I’ll have to make specific plans with her.” Allowing the e-mail correspondence to go beyond four e-mails ensured that Ed would get bored and Suzanne would get frustrated.

Here are the remaining e-mails between them:

FIFTH E-MAIL:
Entrepreneur40: I’m going to Vegas tomorrow. I have an engineering convention there, five days, all expenses paid. Can’t wait. Need some R&R, this project was grueling. PR sounds fun. What exactly do you do?

SassyGirl39: I try to get Hermes mentioned in magazines and newspapers, deal with any disgruntled customers, you know, celebrities and royalty and such. I send actresses and VIPs free samples hoping they will wear them in their next movie, that kind of thing. Can’t complain. I have like 100 Hermes scarves in my closet.

SIXTH E-MAIL:
Entrepreneur40: Sounds neat. Do you like sports? I’m a sports fanatic. Basketball, baseball, football, I watch sports all the time. ESPN is my middle name. I also go to the gym, run three miles a day.

SassyGirl39: Wow! Very impressive. I ski, play tennis, and take kick-boxing classes at the gym. I have two brothers so I know all about sports.

SEVENTH E-MAIL:
Entrepreneur40: Are you close? I’m an only child. Wish I had siblings, but my father died when I was three. So it was just me and my mother. She never remarried, she just couldn’t get over my father’s death. He was killed in a car accident on his way home from work. There were a dozen roses on the seat next to him that he was going to give her that night. They were so in love.

SassyGirl39: Sorry about your father. Must have been hard growing up without one. My dad died last year at the age of 69.

EIGHTH E-MAIL:
Entrepreneur40: Sorry. So, I guess I should ask the obvious question. Why is a pretty girl like you never married?

SassyGirl39: Good question…I guess I haven’t met the right one. What about you?

NINTH E-MAIL:
Entrepreneur40: Obsessed with work my whole life, I support my mother, we’re very close, and I just never made dating a priority, until now. Determined to change all that. Want to get married and have kids, more than one!

SassyGirl39: Sounds good. I always wanted to have two, a boy and a girl.

TENTH E-MAIL:
Entrepreneur40: Well, it’s late and I have to pack for Vegas. Have a 8 A.M. flight and then when I get back I have to put my mother in a nursing home. She’s 80 and getting worse and worse. I’ll be in touch.

SassyGirl39: Hope you have a fun trip and good luck with your mom. Bye!

Ed e-mailed her a week later about his trip to Vegas (he won $700 at blackjack), and about his mother’s declining health, but he still didn’t ask for Suzanne’s number. She e-mailed him back, and then he poofed! She never heard from him again.

We are not surprised. When a man takes more than four e-mails to ask you out, it is not a good sign. Sometimes he may need a push — the one girl who is too busy to e-mail him back forever. That is the one he will pursue.

Unfortunately, most women continue e-mailing men after four exchanges, often wasting weeks or months with these men. Rules girls don’t; they set limits. Of course, we don’t tell men what these limits are, we just stop e-mailing them back after four exchanges. We do not say, “We’ve been chatting for a while, do you want to meet or are you just going to waste my time?” or even the more subtle but equally manipulative, “I’m not big on e-mailing, I’m better in person,” in hopes that he will ask you out, or even “My nails break when I type…” Hint, hint!

As we’ve said before, breaking one Rule leads to breaking another. Women who continue to chat past the fourth e-mail usually end up volunteering their phone number, in the hope that it will lead to a date. They usually end up frustrated by these men anyway. These men don’t call regularly, they ask them out at the last minute, or they find trivial excuses to break up — one man broke up with a woman because they couldn’t agree on what movie to see on their third date, which led to a fight. In plain English, they break up with you because they weren’t that interested to begin with.

So if you keep writing a man back after he hasn’t asked to meet by his fourth e-mail, you are asking for trouble down the road. He may get to know you so well online that his desire to meet you evaporates (poof!). In the online world, as in real life, familiarity breeds contempt. Just cut your losses, delete/next! and move on. Of course, if after you stop e-mailing him, he e-mails you that he wants to meet you and actually asks you out, you can go out with him. Sometimes a man won’t get serious unless he realizes that you have moved on! 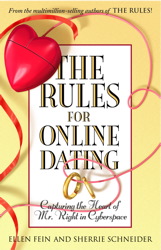 The Rules for Online Dating
by Ellen Fein

The Rules for Online Dating takes women through the process -- step by step, Rule by Rule -- to the ultimate goal: a relationship based on mutual attraction, interest, and respect.