Looking for dating red-flags isn’t exactly the easiest process. No one is perfect, which means there’s certain things that we need to look past in people while dating. However, there are definitely some aspects of people’s personalities you should NEVER ignore. Natasha Burton, author of THE LITTLE BLACK BOOK OF BIG RED FLAGS, shares her rules on dating.

Red-Flag Rule #1: If you’re not sure whether or not you’re a guy’s girlfriend, you probably aren’t.

Red-Flag Rule #2: If he still claims to be “Single” on Facebook or hasn’t deleted his Match.com profile, he’s still actively looking for a girlfriend, which you apparently are not.

Red-Flag Rule #3: If you ask the guy you’ve been sleeping with where he sees the relationship going, and he replies, “I don’t want us to be anything more than this,” no matter how great the sex is, don’t expect a commitment anytime soon.

Red-Flag Rule #4: If he’s hinting at not just a goodnight kiss, but a till-the-morning romp ten minutes into your first date, we guarantee he’s looking for a bedmate, not a soul mate.

Red-Flag Rule #5: If your “dates” with a guy consist solely of booze and booty calls, chances are he’s not your boyfriend.

Red-Flag Rule #6: If he tells you he’s got a “busy day” the moment his alarm goes off, don’t expect him to take you to breakfast.

Red-Flag Rule #7: If a guy declares his love for you, and he’s currently dating your best friend—run.

Red-Flag Rule #8: If he explicitly says, “I’m never going to be the boyfriend type,” take his word for it and find a more loyal lad.

Red-Flag Rule #9: If a guy can’t hear the word “vagina” without giggling, he should not be permitted to touch yours.

Red-Flag Rule #10: A guy who’s not man enough to have your back on all occasions, even if it means upsetting his mother, isn’t worth keeping around.

Red-Flag Rule #11: If a guy can pick up a phone and send you a text, surely he can use the same phone and call you with it.

Red-Flag Rule #12: If you’re always the one doing all the sharing, it’s time your man opens up and starts telling you something more substantial than the score of the game.

Red-Flag Rule #13: If there’s mold growing in your guy’s fridge, you should probably check the date on his condoms.

Red-Flag Rule #14: If your boyfriend has acquired more than $385 in overdraft fees—in the span of two days—you probably don’t want to combine your finances.

Still looking for answers about your relationship? Discover the 4 Elements (Almost) Every Love Story Shares

Excerpted from The Little Black Book of Big Red Flags by Natasha Burton. Copyright © 2011 by the author. Used by permission of the publisher. All rights reserved.

Photo by Huy Phan on Unsplash. 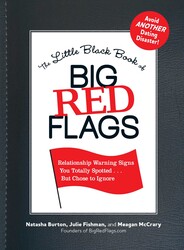 You've done it before. Saw something wrong with him--whether it was suspect grooming habits or ridiculously childish behavior--but let it slide. It's not that big of a deal. Except it totally was. You wanted to fall in love, but ended up going insane. You swore you'd never do it again. But did.

Don't beat yourself up. In the search for love, we've all either blatantly ignored or completely missed red flags. Instead, smarten up. It's time to figure out what you missed and learn how to avoid similar flagtastic fiascos in the future. If you raise your red flag awareness now, you'll be able to greenlight a real relationship down the road.