As bibliophiles, we all yearn to find our very own Mr. Darcy. We set our #relationshipgoals to unattainable heights because who doesn’t want a man that is completely devoted to his love? Julia Sonneborn, author of BY THE BOOK, shares dating advice she’s gleaned from reading Jane Austen.

I went to an all-girls school, and my dating life in junior high and high school was correspondingly dismal. So I remember how mind-blowing it was to read Jane Austen’s Pride and Prejudice for the first time, in my 11th grade English class. Sure, Austen was supposed to be highbrow and literary, but the central romance between Lizzie Bennet and Darcy was what made me compulsively turn the pages and finish the book weeks before we were required to do so. It felt like an escapist fantasy—that such a man could exist, and that he could fall for a woman as witty and opinionated as Lizzie. For a 16-year-old with no dating experience, this was my introduction to how relationships could be.

Not everyone in my class was a fan, though. One of my classmates dismissed the novel as unrealistic, romantic crap. We were supposed to be strong, independent women, and Jane Austen was selling us a bill of goods. Men like Darcy didn’t exist, and it was irresponsible and downright pathetic for us to buy into that fantasy.

I understood why she felt that way. It was the 21st century (well, late 20th), not the 18th. We lived in sexually liberated times. We no longer had to rely on marriage for a secure future. So why were we—these bright, young, modern women—still reading Austen?

The answer hit me very recently, while I was watching the BBC version of Pride and Prejudice for the millionth time. Darcy professes his continued devotion to Lizzie and says, “If your feelings are still what they were last April, tell me so at once. My affections and wishes are unchanged, but one word from you will silence me on this subject forever.”

Oh my god, I thought to myself. He asked for her consent. If she wasn’t interested in his romantic overtures, he was willing to—gasp!—leave her alone.

Then it struck me why this notion was—and still is—so radical. As the #metoo movement has made clear, we live in a culture where women’s consent is considered secondary to male desire. The fact that Mr. Darcy puts Lizzie’s feelings on equal footing with his own is so unimaginable as to seem “unrealistic, romantic crap.” In the real world, men aren’t like Darcy. They’re like Harvey Weinstein, or Aziz Ansari, or the “shockingly bad” kisser in that viral short story, “Cat Person.”

Yet romance novels live in that gap between the world as it is and the world as it could be. As Jennifer Weiner recently wrote in The New York Times, these books, predominantly written for and by women, imagine a world in which female pleasure is not just central but essential. Reading Jane Austen allows us to believe that good men exist—and that they fall in love with good women. This is what it looks like, she tells us. This is what to look for.

So as we come up on Valentine’s Day, here’s my bit of dating advice, courtesy of Jane Austen: There are lots of crummy guys in the world, but it’s worth waiting for the one who, like Darcy, asks for a woman’s consent. When I first got together with my husband, I remember being shocked when he asked my permission before kissing me for the first time. I realized I didn’t expect to be asked; I didn’t expect to have my feelings or my desires considered. His small act of asking for consent—and my realization that if I said no, he’d leave me alone—was one of the most romantic experiences of my life. I got to choose if I wanted to pursue a relationship; I got to choose if it would bring me pleasure. And like Lizzie Bennet, I decided that yes, I wanted this—I wanted this very much. Happy Valentine’s Day!

Have you found your love? Here’s the right time to say “I love you.” 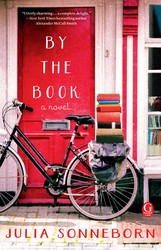 By the Book
by Julia Sonneborn

An English professor struggling for tenure discovers that her ex-fiancé has just become the president of her college—and her new boss—in this whip-smart modern retelling of Jane Austen’s classic Persuasion.Anne Corey is about to get schooled. An English professor in California, she’s determined to score a position on the coveted tenure track at her college. All she’s got to do is get a book deal, snag a promotion, and boom! She’s in. But then Adam Martinez—her first love and ex-fiancé—shows up as the college’s new president. Anne should be able to keep herself distracted. After all, she’s got a book to write, an aging father to take care of, and a new romance developing with the college’s insanely hot writer-in-residence. But no matter where she turns, there’s Adam, as smart and sexy as ever. As the school year advances and her long-buried feelings begin to resurface, Anne begins to wonder whether she just might get a second chance at love. Funny, smart, and full of heart, this modern ode to Jane Austen’s classic explores what happens when we run into the demons of our past...and when they turn out not to be so bad, after all.