You probably already know the answer to this. But what’s blatantly obvious to others is sometimes hard to reconcile when you’re the one dating a jerk. Maybe you have great physical chemistry, or he’s everything you wanted “on paper.” Or maybe you’re just over being single. No one’s perfect—he’s not, and you’re not—but if you recognize one of the following red flags in your guy, it might be time to consider moving on.

He’s hesitant to take the next step. Within reason, of course. It’s unrealistic to expect a ring after just a few months of dating, but if you’ve been together for years, and he’s reluctant to define your relationship or hasn’t said “I love you,” you have to wonder why.

Conversely, everything seems to be moving too fast. It might be a dream scenario to some women, to meet a guy who wants a commitment immediately, but this is the sign of a very real control issue. If he wants to take the next step before he barely knows you, remember, it’s not about you: It’s about him and his insecurities.

He’s not chivalrous. Or maybe we should say, he’s not kind. He doesn’t need to open every door for you, but he should at least offer to help if, for example, you’re juggling several bags and he’s empty-handed. If you’re sick, a little TLC is nice. If you’re moving, he should assist where he can. None of these examples are asking too much from a boyfriend.

You feel more like his mom than his partner. Today, many women don’t want a man picking up every tab, but he should at least reach for it once in a while. If you live together, you should be splitting the bills, the cleaning, and other responsibilities fairly. Otherwise, you’ll grow to resent him.

He prefers you hang out only with him and his friends. It’s wonderful if you both enjoy socializing as a couple, but the idea of a girls’ night out shouldn’t intimidate him or make him feel threatened. Trust is necessary for any healthy relationship.

You don’t exist on his Facebook profile. You’ve been together for a while, but he still hasn’t declared that he’s “in a relationship,” and you’re nowhere to be found in his photo galleries. Unless he never updates his profile, this may be a sign of him clinging to his single status.

He picks fights with you—in front of your friends. Every relationship has its ups and downs, but public drama should be saved for reality TV, not your life. Another “jerk” warning sign: a boyfriend who yells but never listens.

You haven’t met his family yet, and there are no plans to. Unless they live a flight away or he’s somehow estranged from them, it’s reasonable to expect to meet the family after several months to a year of dating. Introducing you shows he’s serious about your relationship.

He’s flaky. He says he’s going to call but doesn’t. He asks you out for the weekend, but doesn’t follow through with plans. He says he’ll be there by 7PM but shows up at 9PM. Or he “forgot” to mention that he was going away for the weekend with friends. These types of behaviors exude a basic lack of consideration or maturity—neither are desirable traits.

He’s been unfaithful. This is a complicated issue. Some argue that long-term relationships aren’t worth ending over a one-time fling, but if he’s a repeat offender or you haven’t been together long and he’s already cheated, you should probably dump him. Quickly. 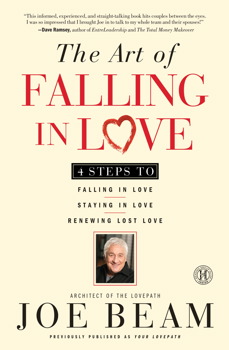 The Art of Falling in Love
by Joe Beam

This book describes, in a way you won’t find anywhere else, what love is, how to find it, how to keep from losing it, and how to get it back if you’ve already lost it. Insightful, revealing, and practical, yet full of gentle humor, this book leads you through the process that will keep you in love for the rest of your life.