So the Super Bowl is less than a week away and many of you may be in a panic about watching it with your S.O. when you have NO knowledge about the sport. Well, lucky for you the Betches, authors of NICE IS JUST A PLACE IN FRANCE, have a guide to dealing with dating a guy who loves sports.

Pretending to know about sports is a cornerstone for dealing with the opposite sex. Bros like the idea that a girl has more going on in her head than clothes, this season’s Essie colors, and celebrity gossip. A good way to do this is by honing your ability to pretend to know about sports. Although we don’t give a shit about sports, guys seem to. And in order to run any machine, you should have some idea how it works. So why not just take the time to actually learn about sports? Because what goes on in the world of sports changes hourly, and much like the news, this does not mesh well with our attention disorders. The best way to go about learning something about sports is to memorize a few key facts, so you can seem like you know what’s going on. Just don’t ask anyone if there’s such a thing as a four-point conversion . . . we learned the hard way. Don’t get overwhelmed. You don’t have to know much.

Guys like girls because they bring a feminine touch to life. If he wants to have a heated debate about how good LeBron James is at basketball or who the greatest football player of all time is, he’ll turn to his bros, not to you. It’s important to know cute, little, slightly wrong facts. You don’t need an intense textbook of knowledge, because you have a vagina. Don’t ever forget that. And sports “scandals” are a gimme, because you will see them on E!

#1. Knowing how scores of various sports are distinguished: It’s important to understand the distinction between a goal, a home run, and a touchdown. You might not be invited to the next football tailgate after you exclaim that the quarterback just made a grand slam. And no, it is not okay to describe last night’s game as an “epic match of red versus blue.”

#2. Know when to jump on the team-bashing bandwagon: This obviously depends on where you’re from, and while betches generally don’t care who wins, we definitely want our side to win. After all, we’re the best, so our team should be champions.

#4. You’ve gone too far if: You know more than six players on any given team, you DVR actual games to watch when no males are around, or you’re involved in intramural softball. Become too knowledgeable about sports and your strategy will backfire. Finally, the NAACP is not an extension of the NCAA. Confusing, we know.

Discover more tips on how to date in NICE IS JUST A PLACE IN FRANCE by The Betches!

For more on Tips on Life & Love: 3 Fashion Rules for A Baller First Date

Excerpted from Nice Is Just a Place In France by Betches. Copyright © 2013 by author. Used by permission of the publisher. All rights reserved.

Photo by Brooke Cagle on Unsplash. 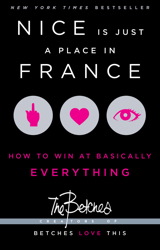 Nice Is Just a Place in France
by Betches

The creators of the popular blog BetchesLoveThis.com use their signature wit and wisdom to teach you how to make it in a dangerous world filled with nice girls and carbs.

LOOK, MAYBE YOU’RE A NICE GIRL, but we’re guessing you’re more like us or you probably wouldn’t have picked up this book. Not that we have a problem with girls who are nice people. But being nice is just not the way to get what you want. And this book is about getting what you want. Not in like a finding happiness, giving back to the world, being grateful for what you have sort of way. But in a ruling your world, being the most desired, powerful badass in the room way, so you can come out on top of any situation: guys, career, friends, enemies, whatever.

How does a betch make that happen?

Here are some highlights:

We didn’t come up with these life lessons. We’re just the ones who wrote it all down. This is not self-help. Self-help is for fat people and divorcées. This is how to deal with your problems when you have no problems. You’re welcome.