Fifty Shades of Grey hit theaters in February in a big way, ranking as one of the top R-rated debuts ever, and now it’s doing gangbusters on DVD. The reason is no secret: Sex sells. If you loved the movie, here are nine other steamy films (old and new) to tickle your fancy. From Shades of Jamie Dornan.

Basic Instinct
In 1992, Michael Douglas was a Hollywood megastar, having won an Oscar for his performance in Wall Street, and he had earned box office success in movies such as Fatal Attraction and Romancing the Stone. In director Paul Verhoeven’s erotic thriller about a cop investigating a possible murderer, he was teamed with young actress Sharon Stone, who was best known for a minor role in Total Recall. Together they made a movie that became one of the highest grossing of the year, and the most controversial thanks to the explicit sex scenes (the film was originally rated NC-17 in the U.S. but after 40 seconds were cut, it was given an R rating), and graphic violence. While Stone has since understandably complained that the infamous leg-crossing scene was filmed without her being aware that the camera was focused up her skirt, both she and Douglas scored many successes after appearing in the hit movie, including his performances in Falling Down, Traffic and The Game, and hers in Casino, Sphere and The Mighty.

Showgirls
Director Paul Verhoeven, who had got it so right with Basic Instinct, unfortunately got it very wrong three years later with this 1995 story of a young stripper in Las Vegas who wants to make it as a showgirl. Cheesy dialogue, bad performances (especially from lead Elizabeth Berkley) and a weak plot—it was rumored scriptwriter Joe Eszterhas scribbled the idea for the movie on a napkin and was offered $2 million to turn it into a script—didn’t help the film at the box office. The rating the film was given was also blamed for the movie flopping—it was classified NC-17 in the U.S. which means no one under 17 can be admitted (usually, sexy or violent movies get the less restrictive R that allows younger viewers to be admitted with an adult). Berkley—who accepted a role turned down by Drew Barrymore, Pamela Anderson and Angelina Jolie and won Worst Actress and Worst New Star Golden Raspberry awards for her trouble—has since appeared in minor roles in movies and made guest appearances in television series, including the U.S. dance contest Dancing with the Stars.

Shame
Turner-Prize-winning artist Steve McQueen made his feature-length directorial debut with the 2008 movie Hunger, and followed it with this acclaimed movie that won the “CinemAvvenire” Award for Best Film at the Venice Film Festival in 2011. It reunited him with his Hunger leading man Michael Fassbender, and explores sexual addiction, telling the story of a successful advertising executive and his various encounters with women and men in New York. Despite the dreaded NC-17 rating in the U.S. for explicit sex scenes and Fassbender’s nudity, the movie has been deservedly acclaimed and certainly the sex scenes have done no damage to Fassbender’s or McQueen’s careers—both went on to make the Oscar-winning 12 Years a Slave, and Fassbender’s subsequent roles have also included blockbusters Prometheus and X-Men: Days of Future Past.

9½ Weeks
One of the most famous erotic dramas of all time, this Adrian Lyne-directed movie from 1986 is best known for the “fridge scene” in which businessman Mickey Rourke blindfolds art gallery assistant Kim Basinger and teases her with the various contents of his refrigerator. Like the erotica in Fifty Shades of Grey, this scene—and other scenes of sexual role-play—became a talking point, and helped make the movie a hit, especially on video, to the tune of over $100 million. Not bad for a film that got a thumbs-down when it was first screened to 1,000 people—reportedly only 40 stayed to the end of the film and of those, 35 said they hated it. While it didn’t hurt Basinger’s career—she went on to star in Batman and win an Oscar for LA Confidential—Rourke fared less well, starring in a series of box office flops (including a dire 9½ Weeks sequel called Another 9½ Weeks) before quitting acting in order to pursue a boxing career. He has since returned to movies, appearing in Iron Man 2 and winning praise for his role in The Wrestler.

Striptease
By 1996, Ghost actress Demi Moore was best known in the tabloid press for the changes she had made to her body—both by exercise and cosmetic surgery—and she showed the results off in this drama based on the Carl Hiaasen novel of the same name. Her character becomes a stripper to earn money, and crosses paths with a shady congressman (Burt Reynolds) who is being investigated by the police. Demi was paid a then-record $12.5 million for her role in a film that would become notorious for its bad performances and awful script (it won six Golden Raspberry awards, including Worst Actress), but a series of flops followed for the actress, and she has made only a handful of little-seen movies since.

Eyes Wide Shut
Reclusive Stanley Kubrick directed this sexual drama that reunited then husband and wife Tom Cruise and Nicole Kidman on screen—they had previously co-starred in the far tamer racing car adventure Days of Thunder and Irish period drama Far and Away. A confusing, meandering drama about a young couple in New York, the film became well known for an orgy scene, especially after it was digitally altered for the U.S. release (graphic sexuality was blocked out by other figures and objects obscuring the view) and for the frank dialogue between Cruise and Kidman’s characters. (“When she is having her little titties squeezed, do you think she ever has any fantasies about what handsome Dr. Bull’s dickie might be like?”) It didn’t harm their careers—Kidman went on to make Moulin Rouge, The Others, Cold Mountain and Australia and Cruise has had numerous blockbuster hits, including three Mission Impossible films. Their marriage didn’t survive, however, with the couple divorcing in 2001.

In the Cut
An erotic thriller based on the Susanna Moore novel, In the Cut stars Meg Ryan as a woman, Frannie, who becomes involved with a police detective (Mark Ruffalo) who is investigating the murder of two women—one of whose limbs were found in Frannie’s garden. But the plot was secondary to the audience’s shock at Ryan’s sex scenes—after all, she was best known for romantic comedies like When Harry Met Sally— especially as she appeared naked in one lengthy scene, her first nude scene in a movie. It became the first in a series of flops for Ryan, whose last movie role was in 2009. Ruffalo, on the other hand, has had a string of successes since this movie, including Collateral, Zodiac, The Kids Are All Right (for which he was nominated for an Oscar) and The Avengers.

Nymphomaniac
A two-part movie from Lars von Trier, released in 2014, this arthouse sexual drama charts a woman’s erotic journey from childhood to the age of 50. Charlotte Gainsbourg stars alongside Stellan Skarsgård, Uma Thurman and Willem Dafoe, but it was rumors of actor Shia LaBeouf’s full frontal nudity and stories that the sex scenes weren’t simulated that made the film newsworthy, months before its release. LaBeouf himself fuelled the rumors in an August 2012 interview with MTV News, saying, “There’s a disclaimer at the top of the script that basically says we’re doing it for real. Everything that is illegal, we’ll shoot in blurred images. Other than that, everything is happening…” It was eventually revealed that the sex scenes were filmed using body doubles for the actors, (“We shot the actors pretending to have sex and then had the body doubles, who really did have sex, and in post [production] we will digitally impose the two. So above the waist it will be the star and below the waist it will be the doubles,” explained producer Louise Vesth) and the film went on to receive critical praise for the story and performances.

Women in Love
D. H. Lawrence’s classic novel was adapted into a 1969 romantic drama by director Ken Russell—a man who was no stranger to controversy in his career, having made movies such as The Devils and the rock opera Tommy. Alan Bates and Oliver Reed play the two friends who become involved with the sisters played by Glenda Jackson and Jennie Linden, and the nude wrestling scene between the two male actors was considered shocking enough for the film to be banned in Turkey. While Jennie Linden didn’t pursue a Hollywood career after the release of the controversial, and successful, film, Alan Bates continued to give acclaimed performances in movies like The Go-Between and Gosford Park (he was knighted in 2003 and sadly died later that year), renowned hell-raiser Oliver Reed had a varied acting career until his death in 1999, and Glenda Jackson went on to win an Academy Award for her role in the movie, and a second one for A Touch of Class in 1973. She is now an MP, representing the Labour Party. 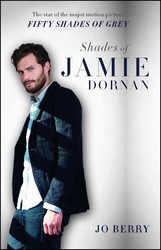 Shades of Jamie Dornan: The Star of the Major Motion Picture Fifty Shades of Grey
by Jo Berry

From film and TV critic Jo Berry comes the unauthorized biography of model-turned-actor Jamie Dornan, starring as Christian Grey in the wildly popular Fifty Shades of Grey film! Jamie Dornan is quickly becoming a megastar. With details compiled from in-depth research into both his personal and professional life, this insightful book will reveal fifty shades of Jamie Dornan—a no-holds-barred biography of the man who everyone wants to know intimately.