Got your eye on a special someone? Learn the many ways you can let that someone know you’re interested without being too transparent. Flirting techniques from The Body Language of Dating: Reading His Signals, Send Your Own, and Get the Guy.

The Lean-to: At any distance, a woman can lean toward the object of her desire and silently speak a wealth about her intentions. As women and humans, we naturally lean toward where we want to be and away from that which we’d like to escape. When a woman leans in the direction of her target, she runs a good chance of becoming his bull’s-eye.

The Deliberate Accident: “Unintentionally” brushing against a man on the dance floor, “accidentally” dipping into the same fondue stream, or “mistakenly” picking up a man’s cell phone instead of her own can turn a woman’s “I’m sorry” into his “Would you like to dance?” Additionally, if a woman brushes against a man’s hand while passing a napkin or plucking a snack from the pretzel bowl, she can conduct electricity that is difficult for him to ignore.

Purposeful Pigs: There’s a reason that the children’s rhyme says, “This little piggie went to market,” and not, “This big callused heel went to the pedicurist.” Our toes lead our bodies in our bipedal navigation. Our minds know this, and other minds know this about us. That’s why a woman should always point her toes in the direction of the man who’s captured her interest. This tells him not only that she’s actively thinking of him, but also that she’s poised to move closer to him at a moment’s notice.

Body Watch: Neurons related to the feet take up so much room on the brain’s circuit board that it’s easy to see why they’re so expressive of inner intentions. The feet contain more neural connections than the arms, shoulders, legs, or back, and those connections rest adjacent to the neural field for genitalia stimulation. This helps to explain the powerfully sexual foot fetish held by some individuals. British zoologist Desmond Morris calls the feet “the most honest parts of the whole human body,” citing their uncanny abilities to leak inner moods and intentions to onlookers.

Space Invasion: Anytime a woman interjects herself or one of her possessions into a man’s personal space she communicates a desire to take more of that space. She can move her foot, a cell phone, an elbow, or a glass into his eighteen inches of personal space and thereby say, “I want to be close,” without uttering a word.

Nod Your Approval: Women perceive nods as signals of understanding, but men perceive them as agreement. Men, thanks to their evolutionary roles, value approval because it indicates that they’re doing a commendable job. If a woman wants to commend a man’s “piece of work,” she’ll do well to nod in his direction, even if she’s being held by another conversation.

Heart Touching: When we’re moved by a poignant story, or when we’re expressing our love for someone or something, we often find ourselves bringing our hands up to our chests, over our hearts. When a woman accompanies this gesture with a small gasp or a gulp of air, she’s showing a man that her heart has been touched—to make it any clearer she’d have to rip it from her chest and show him how it bleeds.

Watch His Mouth: A woman can’t control what a man says, but she can control how he feels while he’s saying it. As he’s speaking, her eyes should travel around his face, coming to rest frequently on his mouth. This is a universal precursor to kissing and will inevitably cause him to flush with heated desire.

Go forth and flirt. Not ready yet for a full flirting game? Check out these 10 seduction tips and tricks from Casanova. 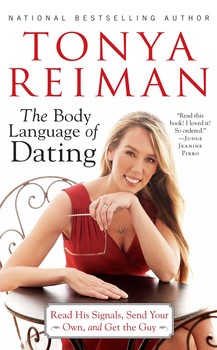