Just because I write about a sex act doesn’t mean I’ve done it. I get variations on this question a lot: “So, like, do you do all the things you write about?” The question is generally coming from a place of mixed curiosity and voyeurism. Because sex is not just physical, but mental, I’m easily able to write about sex acts I haven’t done before. Don’t assume I’ve done everything I write about… but then again, don’t assume I haven’t, either. Yeah, I probably have done it. But that’s not necessarily true of all erotic romance authors, and we get sick of being asked about our sex lives. It’s even creepier when the question asker then turns to my husband and gives him a wink wink, nudge nudge.

Yes, writing sex turns me on…but not all the time. My goal when writing is to arouse the reader. This means that on a first draft, I’m looking to be as sexy as I can be for my first reader—myself —and that has some obvious physical effects. On my numerous edits and rewrites, though, the sexy feelings are gone. I’m instead looking for characterization, narrative consistency, word choice, and to stop repeating the words “felt” and “sensation” so damn much.

Research doesn’t happen in the bedroom. Very little of my research involves me asking my husband to pretend to be my main character and replicate the scene from pages 73-78. I have asked him to help me practice a particular bondage knot so I can accurately describe it, but that’s as far as the “sexy research” goes. Oh, and I attend kink conventions now and then, too, so those are fun “sexy research.” Most of my research is spent on far more mundane topics, though: studying the hierarchical organization and day-to-day activities of the jobs I’m writing about, or doing Google Street View walkabouts of places I’ve never visited, or examining IKEA floor maps, to name a few.

I could lose my day job over my writing. I write under a fake name not because I’m embarrassed by what I write, but because I teach high school. While I teach in a very liberal and sex-positive part of the country, if I were “out” about my writing, it would be difficult for me to continue my work. There’s nothing illegal about what I write, which is fiction between consenting adults, but teachers are expected to maintain puritanical standards of moral conduct in their own personal lives. I’m a consummate professional with my students, but I always fear being “outed” and the impact of the reveal on my career.

It’s work, but it’s worth it. Writing a sexy letter to a lover is fun. Write a titillating erotic scene is fun. Writing an entire novel with character development, deliberate and arousing sex scenes, and a satisfying arc and resolution is a lot of work. I can’t just sit at my keyboard and crank out a novel in an evening or two, send it off for publication and be done with it. Just because there’s sex in a book (sometimes a lot of sex) doesn’t mean the book hasn’t been deliberately crafted and painstakingly edited, draft after draft. Even though the books are a lot of work, they’re so rewarding to write. Getting a book from idea to publication is incredibly satisfying. That finished product makes all the struggle worthwhile, even if I’m not just spending my spare time practicing new sex positions. Well, maybe I am… but not for book research. 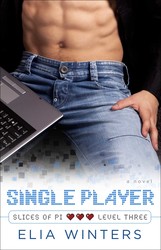 Geeky meets kinky in the third novel of the sexy Slices of Pi series by RITA-nominated author Elia Winters, where the employees of a gaming company in sultry Florida work hard—and play even harder. Matthew Abrams finally has the life he’s always wanted—a promising career as a programmer at PI Games, a decent apartment in a nice neighborhood, and a thriving social life. And he’s perfectly content until he has a one-night stand with Silas Benson, a biomedical engineer with a charitable side to boot. Suddenly Matthew is doubting his life choices and worrying he might not be living up to his full potential. Silas Benson doesn’t have time for much else outside of work, and that’s how he’s always liked it. As a biomedical engineer, he’s at the cutting edge of advances in the field, and he’s not going to waste his life partying when he could be doing actual good in the world. After a one-night stand at his friend’s twenty-fifth birthday party, though, Silas feels his focus shifting toward a certain tall, dark, and handsome almost-stranger. When an emotional breakdown requires Silas to take a leave of absence from work, Matthew rushes to his aid and teaches him the merits of frivolity. Silas is an unwilling student at first, but Matthew soon has him in the groove, which makes for one steamy, wild ride. But is this a forever sort of affair, or will Silas abandon Matthew’s wanton ways in favor of a life of serious-minded solitude?