Here’s a quick guide on what to take away from that first smooch:

1) Is he confident—or just cavalier?
Everyone knows confidence is sexy—as long as it’s not just blind cockiness used willy-nilly on anyone and everyone. The first kiss can help you separate the grounded and bold from the egomaniacs and braggadocios. How can you tell? Does he try to force the kiss on you like he’s giving you a gift that he just KNOWS you’ll love? Not good. Or does he ease into it the way you put your arm around an old friend—warm, embracing, strong? That’s the confident guy you’re looking for.

2) Does he rush things?
There are people who relish the sweet, simple joys of life, slowing to savor the lilies along the way, and then there are some who simply mow down those lilies en route to whatever it is they think they’re seeking. First kisses give you a good case study: Does he linger in the kiss, drawing out its full erotic and emotional potential, or does he start rushing off to put a tongue in your ear or try to slide a hand up your shirt? Guys who are still thinking of sexuality as “bases” and want to try to get home as soon as possible do not make up the world’s great lovers. You can weed them out with just one smooch.

3) Does he react to the signals you’re sending?

Good kisses don’t follow a formula; they’re an impromptu and evolving dialogue, like an unrehearsed mambo between two professionals, pressed close together. In the act of each kiss, we send dozens of micro-signs, alerting the person to how strongly to push or pull back, how to tilt and turn his head, how much tongue to share (if any), whether the rest of the body becomes part of the kiss, and on and on. These signals are your body’s way of showing what it likes, but only some kissers will be able to notice and respond. What types of guys are those? Probably the kind who will notice your other preferences in life as well. But the guy who just keeps kissing his way, no matter what you do? Red light! Red light!

4) Is he a full-body type (or just a one-point-of-contact guy)?
I’ve always believed that if the only point of contact in a kiss is the lips, then you’re only getting the tip of the iceberg of pleasure. In my mind, kisses can become transcendent by going 3-D, involving hands touching, bodies leaning, legs intertwining—creating co-efficients of pressure that are little dialogues or dances in themselves, both supportive to and part of the main dance of the kiss. My belief is that when you kiss someone who engages his whole body, it means he’s likely to engage it (and yours) in your horizontal exchanges as well. If he doesn’t, you risk having a one-point-of-contact man on your hands, and I think you know what that means…

5) Was he appreciative?
I know there are a lot of women out there who secretly like guys who remain a little aloof, somehow thinking that if the guy isn’t into it, he must be really special. But to me that’s a false premise; often the guy isn’t that into it because he’s simply emotionally closed or playing the field or even just trying to see how little effort he can get away with providing. Instead, I think you should try to find guys who you respect and who turn you on, but who are also really pumped up to be with you—and show it. So when you do end up making out with a guy for the first time, if he looks up starry-eyed, smiling, and maybe a little tongue-tied, you know he’s excited to be right there, right then—with you. And that’s a very good sign.

Finally the One Thing You Can’t (Necessarily) Tell: Will he be good in bed?
Yes, it’s commonly thought that the first kiss tells you what you need to know about how a man will be in the sack, and, yes, all of of the indicators above (confidence, appreciation, attention-paying, not rushing, using the whole body) should convert to some degree, but sex is still a wild card, and you really never know for sure. What you can find out is whether he’s likely to be terrible, because, obviously, if he’s flunking any of the 5 tests above, he’s not likely to be an A-student in bed. The reverse, though, is the problem: Just because he passed the kiss with flying colors, I don’t think you can conclude he’ll be a great lay. He might be, but he might also get nervous, have issues, like different things than you do, etc. So while the kiss can be a good way to weed out probable losers, it’s not quite a surefire way to pick winners. If only!

For more advice on love and relationships pick up MUCH ADO ABOUT LOVING by Jack Murnighan and Maura Kelly.

Oh! And don’t do any of the crazy things that ruin first impressions. 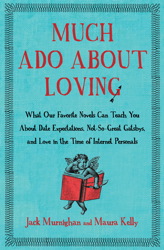 Much Ado About Loving
by Jack Murnighan

This smart and charming hybrid of lit and love is filled with hilarious relationship advice borrowed from the most famous characters in literature. From Dido to Jane Eyre, the characters of great literature are trying to figure out how to have healthy, happy relationships—with varying degrees of success—just like the rest of us. But the world’s best-known heroes and heroines didn’t go through all their trials and tribulations for naught—and now, thanks to Much Ado About Loving, we can learn from their foibles, misadventures, and eventual triumphs.