You really do have to get through a few frogs before finding your prince. Dating can be rough, so it’s important that you recognize the red flags and pinpoint which guys aren’t worth your time. THE HER CAMPUS GUIDE TO COLLEGE LIFE shares the five signs you should say “Thank U, Next” to Mr. Wrong.

Ariana Grande said it best with “Thank U, Next”; we college women have to make our way through a slew of bad boys before we can find the right guy for us. But just because you may not find Mr. Right right away doesn’t mean you can’t do your best to avoid the guys that are a waste of your time. Be on the lookout for these five signs to steer clear.

You know that your guy has free time during the week—last we checked, watching hockey wasn’t an academic requirement—but he waits until 10 p.m. on a Friday night to ask you to hang out. At first you’re flattered and pumped to get to spend time with him. It isn’t until the next weekend when it happens all over again that you think to yourself, “Why didn’t he make plans with me earlier?” It’s a red flag if he needs beer goggles or liquid courage to hang out with you, and, just as bad, it could mean that he has some other ladies on the side

With cell phones, Facebook, Instagram, and Snapchat, there’s hardly any way a college kid could slip off the radar. Yet, somehow, that troublemaker of a guy you’ve been texting has successfully managed to go missing. He doesn’t text, he doesn’t call, and he doesn’t answer any of your DMs. Then, days or weeks later, he’s back, asking you to hang out. No explanation, no excuses—or just incredibly lame ones. What gives? It probably means he’s playing the field and you’re his backup option, which is definitely not okay (and not conducive to a healthy relationship). Don’t let yourself be the last to know when the signs are already loud and clear

There are two simple explanations behind your boy-toy’s trashtalking: first, that he’s perfect. Of course all of his last relationship’s problems were his ex’s fault, not his, because he’s infallible. Case closed. The other (and more likely) explanation is that he’s selfrighteous, he’s critical, and he would rather take a punch than a rejection. No one likes listening to a whiner, and why hang around a guy who only focuses on the negatives? Chances are he’d say similar things about you if you were to date and break up, and you definitely don’t want to be the next ex whose dirty laundry he airs in public.

#4. He Disses Your Friends

The golden rule of girl code: friends over flirts, always. It’s one thing if he’s disrespecting girls whom he’s chosen to be with—the insecurity and blabber-mouthing are never good signs, but he might regret dating those girls for legitimate reasons. It’s entirely another if he’s disrespecting girls that you’ve chosen to be with: your BFFs. You chose your best friends for a reason. Whether they’re witty, friendly, or wonderful wingwomen, they’ve earned your stamp of approval. If a guy says your friends aren’t worth your time, he’s not just questioning them; he’s also questioning your judgment. Definitely not okay.

#5. He Immediately Gives You Pet Names

Honey. Baby. Sweetie. If it sounds sugary, cute, and fitting for a fluffy new puppy, it’s a pet name. You may be flattered at first, but remind yourself how impersonal those nicknames are. The important thing to remember is that, though it may be an adorable name, it isn’t your name. Who’s to say he isn’t calling other girls by the same one? In the worst cases, it can be a way to avoid calling one girl by another girl’s name by accident. Yikes.

Find out what the other 2 signs are in THE HER CAMPUS GUIDE TO COLLEGE LIFE!

Tips on Life & Love: 10 Gentle Reminders for If You’ve Ever Thought “He’s Just Not That Into Me”

Excerpted from The Her Campus Guide to College Life. Copyright © 2019 by the author. Used by permission of the publisher. All rights reserved. 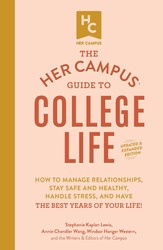 The Her Campus Guide to College Life, Updated and Expanded Edition
by Stephanie Kaplan Lewis

Get ready for the best years of your life! From the experts behind Her Campus, this completely updated college guide is bursting with insider tips to help you navigate classes, relationships, and all your extracurriculars—including parties and Greek life, of course. Whether you’re just starting freshman year or a seasoned pro as an upperclassman, you’ll learn tips and tricks for how to survive bonding with your roommate (while setting ground rules for your new space at the same time), beating the dreaded Freshman 15 without having to give up dessert, snagging a date with the cutie from class, coping with stress and anxiety (even during the insanity of finals week), and more.