Texting is convenient, I know. You can exchange information quickly. But for relationship growth, the text zone is the dead zone. From my book I Suck at Relationships So You Don’t Have To.

I have a girlfriend who met a guy at a party, and they connected over a bottle of wine. The next day, he video-chatted with her from his bedroom, and almost without her realizing it, this became their main method of communication. At first, this seemed novel and fun. He got her all set up with the video-chat program, which she had never used before. However, the more she tried to get him to call or go out with her, the more she realized that he never wanted to leave his house or socialize with people he didn’t know. She didn’t realize the full extent of the situation until it was very difficult to extricate herself.

Be a sexual person, but don’t be a textual person. Here are my simple rules for a healthy textual relationship:

1. At the beginning of a relationship, if you give someone your number, just say something simple, like “Give me a call.” If you get a text, you could text back briefly a few times but don’t let it go too far. Text back: “Why don’t you give me a call?” This sets a precedent right up front. If it continues, shut it down. Start ignoring the texts completely. Once, a guy who was interested in me wanted to text all the time. When I told him I wasn’t a “texting person” and wanted to speak to him on the phone, he fell off the grid. I could have wasted six months sending him texts and hoping it would turn into something more. I’m glad I shut it down early. At the beginning of a more recent relationship, I admitted I wasn’t a great texter. I did that in the beginning because, later, I knew I could fall back on that if he started texting me too much. He could always say, “You’re not really great at this texting thing,” and I could say, “I told you!”

2. Once you’ve received a phone call, only use texting for the exchange of brief information, like confirming details or locations. “See you at 8, I drive a Volvo,” or “In the corner booth wearing the blue shirt.”

3. Once you’ve been out on an actual date, texting is okay for brief flirtation or anticipation. “Had a great time.” “You looked so sexy last night.” “Really looking forward to tonight!” But be sure the anchor of your communication remains in-person or phone conversations. Don’t get sucked into an hours-long textual exchange, as romantic as that may seem to you. Keep it brief. Save the intimate exchanges and playful banter for in person or at least on the telephone, where you can hear each other’s voices.

4. Once you are in a long-term relationship, you don’t have to be quite so careful, unless you start to get lazy and sloppy and you stop connecting in person. If you share a life together, especially if you live together, texting does become convenient. “Can you pick up something for dinner?” “This meeting is boring! Thinking of you.” “I have a surprise for tonight . . . ;-).” The goal is to eventually have more but briefer texts and fewer but longer phone calls. It’s texting with a side of phone. This is also convenient when either or both of you are at work. Unlike a phone call, a text can be read when it’s convenient.

5. Never, ever, ever have emotional conversations, arguments, or important discussions by text. The potential for misunderstanding is just too great. Don’t be one of those people who never looks up from her phone. Connect with real people. It feels so much better.

6. Cheaters use text. Just know that. His wife could be in the room while he’s texting you.

If you find yourself in the text zone, you need a text-ervention. Just stop texting back. Or wait to text back for a while. Instant responses mean you’re too available anyway. Answer a basic question like “When are we meeting?” but don’t answer questions like “Hey, what are you doing?” or even worse, “Hey . . .” (Translation: booty call.) Refusal to live in the text zone will separate you from the booty-call girls.

If texting has become an ingrained habit for both of you, you might also consider doing a cleanse. Agree to do it so you each know the other isn’t ignoring you. Even one day of not texting each other at all can make the biggest difference in the world, if that is how you have become used to communicating. 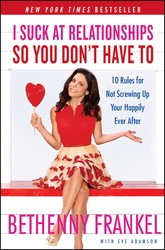 Bethenny Frankel, five-time New York Times bestselling author, self-made businesswoman, and media maven, shares her ten rules for relationship success and takes us on an empowering journey to learn how to say yes to love.

From running her Skinnygirl business to being a mom and a TV star, Bethenny Frankel appears to have it all. But when it comes to relationships, she is the first to admit that she has failed—a lot. In fact, Bethenny has made every mistake, from calling when she shouldn’t have to misreading signals to staying with a guy for all the wrong reasons. In working through the mistakes, she has gained insight and wisdom about what matters most.