Paying attention to your “spidey” sense helps when looking for love online. But sometimes your gut instinct may be wrong. Learn which red flags are worth a second look. From Love at First Click: The Ultimate Guide to Online Dating.

• Forty-plus, never been married. Most of my female clients believe that men older than forty who have never been married are commitment-phobes, and they prefer to date men who are divorced or widowed instead. While some people of both sexes are avoiding the big white wedding, the majority I meet are genuine about wanting to find love. Assuming that guys in this category are damaged goods and dismissing them means you could miss out on The One.

• Wants kids? Most sites provide several options when it comes to wanting children: definitely want, want someday, maybe want, and so on. Many of my male clients, particularly those who are older than thirty-five, filter out women who don’t say “definitely.” Something like the desire to build a family or not is a fundamental difference and a value that you certainly need to share with your long-term love. But assuming that the “somedays” and the “maybes” are not interested without delving further is too presumptuous.

• Broad preferences. Some singles keep their preferences broad. Offline, we don’t judge people for keeping their options open. But when everything is in black-and-white, we think twice. If they say they’ll date someone who’s twenty-five, are they really also willing to meet someone closer to their age at forty? Preferences are not deal breakers. Just because they checked off a few boxes doesn’t mean they’re make-or-breaks. Your matches often give less thought to these details than you would so don’t automatically rule them out.

• Drink “often.” If alcohol is on your list of deal breakers, by all means filter out these matches. But if it’s a minor thing, keep your options open. Just because people say they drink often doesn’t mean they’re chugging a six-pack of Budweiser alone every Monday night.

• Body type. Determining one’s own body shape can be tricky. Everyone views his or her weight differently, and it’s often hard to differentiate one option from another. Some might consider an “average” girl to be “curvy” if she has a booty. But others might never search under “curvy” because they think it’s code for “overweight.” Ultimately, photos are more telling than a checked box. Don’t get too hung up on which options your matches choose if you think they’re cute. Until you meet in person, try not to overanalyze their shapes unless their bod in photos is unattractive to you. 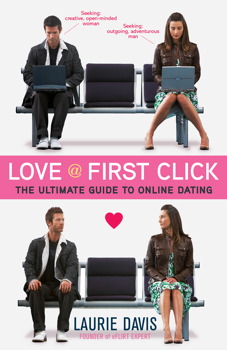 Love at First Click: The Ultimate Guide to Online Dating
by Laurie Davis

Whether you’re a digital dating vet or virgin, this is the ultimate guide to online dating that will take your online crush to offline love.