You’ve probably met couples in which one or both partners interrupt the other person in public. You might even be that couple! Sevda and Tarik were friends of Gail’s (my wife of 30 years) and mine during our early years of marriage. At parties or social gatherings, Sevda, a university professor, insisted that Tarik, a physician, was an “interruptor.” She also insisted that she was expressly not an interruptor. And she confessed that Tarik’s tendency to interrupt created significant marital difficulties.

She was right—it did, and Tarik was oblivious to the damage. Men are often unable to see the effects of their actions during interactions and conflicts. Male heart rates do not rise as high as women’s during a marital conflict or stressful situation, and males may not notice as much because they are not as stressed by a situation. Scientists Janice Kiecolt-Glaser and Ron Glaser have found that not only women’s heart rates but their stress hormones epinephrine and nor-epinephrine also rise during stressful situations in marriage more than men’s. Men’s “hearts,” literally, remain oblivious at times to the possible damage in their actions.

But that’s not the whole story. Women often tend to mirror the public male behavior (interrupting, in this case) in private in more damaging passive-aggressive ways than they realize. Here’s an example: I had arrived early to Sevda and Tarik’s apartment for a social gathering and used the restroom. Coming out of the restroom, I could hear a conversation that a therapist would never otherwise hear because it wouldn’t take place in a therapy office or laboratory.

Tarik: “I was reading an article about asymmetry in both mammary glands and testicles that posited why one mammary gland and testi—
Sevda: “One’s bigger than the other, so of course they’d be asymmetrical.”
Tarik: “Yes, I know, but the size doesn’t create the genetic—
Sevda: “Hand me that picture—”
Tarik: “What the biologists were positing was that the asymmetry delivers a message—
Sevda: “Do we really have time for this now? We’ve got to get this picture hung.”

The very thing that drove Sevda crazy about Tarik in public also drove Tarik crazy about Sevda in private. While certainly both partners had their reasons for interrupting—in this case, Sevda was in a rush, which is a valid reason—the accumulation of the interrupting behavior was harming their marriage. By trading interrupting behavior back and forth in various settings, both lovers devalued one another. Over a period of years, it was difficult for this marriage to work.

Fortunately, no marriage needs to be burdened by these bad habits. Here are five that you can identify and work on right now. If you are involved in three or more of these to a significant degree, your relationship could be in serious trouble.

To try to get immediately to the heart of the matter, reflect on this list separately with some blank paper on hand for writing notes, then compare your notes together afterward. Do this list twice—once for yourself (i.e. “look in the mirror at yourself”) and then for your partner: gently assess your partner’s habits.

3. Avoid doing things sexually that either you really want to do and/or that you know your partner needs and wants to do? Give examples of sexual experiments you or your partner want to try—write down why you avoid them. Be specific. If you remember conversations you and your partner have had about these things, write at least one of those conversations down.

4. Criticize your partner too much in public and/or in private? Some amount of critique, judgment, moralizing, and correcting of a partner’s behavior is normal in any long partnership. You care about your partner and figure you know what’s best for him or her. But do you criticize, judge, become reactive, or correct your partner on more than just a few things? If so, list those things.

5. Let your partner criticize, judge, moralize about, and correct you more than is safe for the development, growth, or stability of your own separated identity and self? It’s normal for all of us to defer to our partner’s critiques sometimes—if we didn’t, we’d lack an essential humility in our relationship. But if you are getting critiqued every day, and if you constantly assume your partner is right and you are wrong, your self-confidence is probably being significantly debilitated. List the critiques you “take” from your partner.

Assuming for a moment that you’ve both done this exercise, compare notes, talk, then use your lists and anecdotes as grist for relational improvement. As needed, talk with a counselor alone or together about these lists. If, as you talk about these things with your partner, one or both of you become either blaming or defensive, set a timer so that neither of you goes on and on (which can make the other defensive or bored or blaming). I suggest three minutes for each description or example of each bad habit (without interruption!). If either of you takes more than the allotted time or interrupts start the particular point over. If one of you tells the story by blaming, start it over. If one of you becomes defensive, start it over.

As you talk about these bad habits in a timed or other safe way, and as you gradually (or immediately) do it without blaming one another or becoming significantly defensive, you will be practicing intimate separateness. This paradox is the key to healthy marriage—the ability in relationship and marriage to stand apart independently while still embracing one another lovingly. Removing your bad habits can ensure healthy intimate separateness in your marriage—at the same time, just working on identifying and talking about those bad habits can be a first major step in the journey. 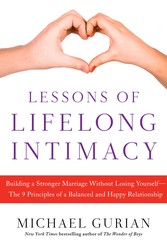 Lessons of Lifelong Intimacy:Building a Stronger Marriage Without Losing Yourself
by Michael Gurian

New York Times bestselling author Michael Gurian offers a groundbreaking plan for couples seeking to build a healthy relationship, work through past hurts, and create greater intimacy.Become separate from your partner yet also become closer—sounds counterintuitive, doesn’t it? With twenty-five years of family and marital counseling practice, Michael Gurian shows that “intimate separateness” is the key to creating a healthy partnership in life.