There’s nothing as electrifying as falling in love. Andrea Dunlop, author of SHE REGRETS NOTHING, shares the 5 dating “mistakes” you should make before settling down. Remember, Mr. or Ms. Right is just around the corner.

With Americans getting married later than ever (the average is 27 for women and 29 for men, up from 23 and 26, respectively, in 1990), most of us are spending more time swimming in the dating pool than in generations past. More than just a search for “the one,” the extended singledom of the modern era can be a time for self-discovery, adventures with friends, and hopefully, loads of great stories you can one day tell your grandchildren that begin with “Long ago, before I met your father….”

We all want to grow old with no regrets, so here are five dating “mistakes” that I highly recommend making before settling in with a long-term love.

Have a Long-Distance Romance: Distance may make the heart grow fonder, but it makes it pretty hard to build a life together in the long term. In the short term, however, there’s nothing like the heightened drama of a long-distance love affair—the longing, the love letters, the idealization, the bliss of the reunion after being apart—it’s the stuff romance novels are made of! Not actually having to deal with another person’s flaws—or their grumpy moods, their dirty dishes, their credit card debt—leads to a level of idealization that, while unsustainable, is super enjoyable while it lasts. Everyone should have a long-distance love at least once, and bonus points if it’s someone from a foreign country; just make sure to watch a few episodes of 90 Day Fiancé before you lose your head and put a ring on it.

Do Something “Crazy” in the Name of Love: To be clear, I do not mean “crazy” like stalking an ex, or hacking into someone’s email, or anything else that would cause someone else to be scared of you or the police being called. I mean crazy in the grand-gesture, put-your-heart-on-the-line-for-love, cinematic-moment kind of way. Even though it doesn’t always feel like it, dating when you’re not ready to settle down is pretty low-stakes, so go on–bare your soul, write that love song, get on the train to see your beloved, ask out the person of your dreams. We only get a small window to be truly idealistic about love, so throw caution to the wind while there’s nothing to lose.

Date Mr. or Ms. Wrong: Dating shouldn’t only be about finding a partner, but about getting to know yourself and hopefully some interesting people along the way. Before you find Mr. or Ms. Right, I suggest you go out with a few people you’re pretty sure you don’t want to end up with but who is great for the moment you’re in. Maybe it’s someone just a bit too old or too young for you, someone who doesn’t share your long-term goals, or someone who is otherwise unsuitable but oh, so appealing—indulge the clichés of your fantasies, be they motorcycle-riding hedonists or dreamy poets with no retirement savings. Not only will you broaden your experience and empathy, but when it does come time to choose a long-term love, you’ll have firsthand experience of what doesn’t work for you.

Crush on Someone Unattainable: Sometimes there’s nothing better than a crush that can’t go anywhere. Just like a long-distance love, you’re unlikely to get much exposure to an unattainable crush’s faults, which lets you fill in all the blank spaces with dreams and get the pleasure of that lovey-dovey feeling without ever having to make yourself vulnerable to heartache. According to research, we often crush on people we admire and want to emulate, especially when we’re young, so a crush can be a great vehicle for self-discovery. And while idealizing a real-life partner is a recipe for disaster, crushing from afar lets you have the fun of the fantasy without the messy reality.

Put Love Last: Sometimes the search for love can be excruciating, but once you’re partnered up and your fate is inextricably tied to someone else’s, you never get to fly fully solo again, so don’t waste it! From spur-of-the-moment trips with friends to working late nights on your passion project to entire Sundays spent watching The Real Housewives with your bestie, single people get to put themselves first in a way that the partnered don’t, so why not enjoy it to the max?

Are you fluent in the kissing language? 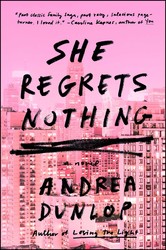 She Regrets Nothing
by Andrea Dunlop

In the tradition of The Emperor’s Children and The House of Mirth, the forgotten granddaughter of one of New York’s wealthiest men is reunited with her family just as she comes of age—and once she’s had a glimpse of their glittering world, she refuses to let it go without a fight.When Laila Lawrence becomes an orphan at twenty-three, the sudden loss unexpectedly introduces her to three glamorous cousins from New York who show up unannounced at her mother’s funeral. The three siblings are scions of the wealthy family from which Laila’s father had been estranged long before his own untimely demise ten years before. Two years later, Laila has left behind her quiet life in Grosse Point, Michigan to move to New York City, landing her smack in the middle of her cousins’ decadent world. As the truth about why Laila’s parents became estranged from the family patriarch becomes clear, Laila grows ever more resolved to claim what’s rightfully hers. Caught between longing for the love of her family and her relentless pursuit of the lifestyle she feels she was unfairly denied, Laila finds herself reawakening a long dead family scandal—not to mention setting off several new ones—as she becomes further enmeshed in the lives and love affairs of her cousins. But will Laila ever, truly, belong in their world? Sly and sexy, She Regrets Nothing is a sharply observed and utterly seductive tale about family, fortune, and fate—and the dark side of wealth.