We all dreamed of our prince charming as a child. We’d find a man who would sweep us off our feet and the next day we would be married and living in a castle. While that “dream come true” idea became the narrative of our childhood, many of us are now realizing how problematic this narrative can be. Mandy Len Catron, author of HOW TO FALL IN LOVE WITH ANYONE, shares why the Cinderella story doesn’t stand the test of time.

I’ve always loved Cinderella stories—not just the Disney movies, but every story where some essentially good but totally overlooked person is noticed and, ultimately, rewarded with every imaginable kind of happiness. Growing up, my favorites were Pretty Woman and Sixteen Candles. You know the scene where Richard Gere pulls up in his white limo and climbs the fire escape to Vivian’s apartment, even though he’s afraid of heights? It’s hard to feel anything less that total vicarious pleasure while watching it. At their heart, Cinderella stories are fantasies of recognition. But they’re also super problematic.

I’m not the first person to point out the problems with Cinderella stories. But it’s 2018, the #metoo movement is raging, and we’re all trying to rethink our assumptions about sex, love, and power. Our stories both shape and reflect how we think about the world. So it’s a good time to revisit the most famous love story in Western culture. Here are three reasons why the Cinderella story doesn’t stand the test of time:

#1: They Create the Illusion of a Romantic Meritocracy

In Cinderella stories, love is awarded to those who deserve it. Not only do they suggest that love equals marriage and marriage equals happiness (two assumptions we make all the time), they also imply that a very specific kind of woman deserves this happiness: she is young, white, and beautiful. She’s also incredibly boring. Cinderella’s most notable quality is her kindness to animals but she doesn’t have much else going for her.

The idea that love is connected to deservingness also suggests that if you’re single—that is, if you haven’t been chosen—you’ve failed somehow: you aren’t young or beautiful or white or thin or modest enough to be loved. The Cinderella narrative makes it hard to imagine a world where being single could be intentional—and fantastic.

#2: The Protagonist Is Rewarded for Not Seeking Love

In Sixteen Candles, Samantha goes out of her way to avoid interacting with Jake. In Pretty Woman, Vivian refuses to kiss Edward on the lips. Most Cinderella characters are rewarded for having basically no desires of their own. Even in the Disney version, where Cinderella is abused by her family, she never expresses any real hope for change.

Women with ambition—those who seek love or wealth or status—are also, not coincidentally, portrayed as cruel and competitive. If stories tell us how to live, then Cinderella tells us that women are punished for their ambition and desire. They are better off being desirable—and finding wealth and status through their romantic partners. This idea sounds charmingly dated, but a study by Laurie Rudman and Jessica Heppen found that college age women with implicit romantic fantasies were more likely to “depend on men for economic and social rewards.” It’s not hard to imagine how the same industry that makes Cinderella-style romantic comedies also enables guys like Harvey Weinstein.

In Cinderella stories and, frankly, most of our love stories, love is something men pursue and women wait for. Sure, it seems sweet that the prince pulls out all the stops to find the mysterious woman with the tiny foot and the glass shoes. But what if she actually didn’t want to be found? The notion that men get to choose and women get to be chosen implies that women should be grateful for male attention, in whatever form it arrives. A study by Julia Lippman found that watching films that portrayed persistent pursuit as romantic made some participants more likely to endorse stalking behaviors.

Remember that guy who vowed to play the piano until his girlfriend took him back? He’s a relatively-harmless example of how these ideas manifest in the real world. But the incel movement—guys who want to punish women for not having sex with them—is also rooted in the idea that women should be passive, modest, grateful for attention from men, and desirable but with no desires of their own.

Literary theorist Jonathan Gottschall argues that stories matter because they “reinforce a set of common values” but if we want a more equitable culture, we need more stories where women are rewarded for their agency and ambition, where they get to choose exactly the kind of life they want, regardless of whether or not it involves a man.

Mandy Len Catron shares why we keep falling for those Cinderella stories.

Excerpted from How to Fall in Love with Anyone by Mandy Len Catron. Copyright © 2017 by Simon & Schuster. Used by permission of the publisher. All rights reserved. 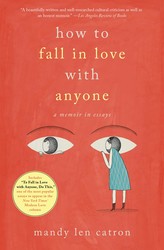 How to Fall in Love with Anyone
by Mandy Len Catron

“A beautifully written and well-researched cultural criticism as well as an honest memoir” (Los Angeles Review of Books) from the author of the popular New York Times essay, “To Fall in Love with Anyone, Do This,” explores the romantic myths we create and explains how they limit our ability to achieve and sustain intimacy. What really makes love last? Does love ever work the way we say it does in movies and books and Facebook posts? Or does obsessing over those love stories hurt our real-life relationships? When her parents divorced after a twenty-eight year marriage and her own ten-year relationship ended, those were the questions that Mandy Len Catron wanted to answer.