Show your man you’re devoted, even if he’s not perfect, with these strategies from Dr. George Weinberg, author of WHY MEN WON’T COMMIT.

You can be sure of your man’s loyalty only if you know that he loves you, not the fact that you’re pretty or have a good job or have a lot of men interested in you. He needs to know that you feel the same way about him.

From the start, you’ve been showing him that you care about him, that you see his specialness and not just his accomplishments or social status. He needs to know that you would go on loving him even if he lost some aspects that may belong to his Masculine Pretense — his job or his hair, or his big car, or his portfolio. Now you need to go one step beyond recognizing his specialness — show him that you are loyal to his special essence, which will never change, even if his circumstances do change a great deal.

You have some very simple ways of doing this:

1. Don’t let him see that you chose him by category. Your man has spent a lifetime defining himself as a hero, and no hero wants to feel that he is interchangeable with someone else. Even if it means a lot to you that he’s a professional, or tall, or from a good family, focus on him, not on his category. No man wants to feel that you chose to be with him just because he satisfies a need of yours — for an escort, a father to your children, an admirer, a provider. If he gets the idea that you want him mainly because he’s financially secure or because he’s a medical student with a bright future, this isn’t the same as your wanting him, for better or for worse. How can he feel that you are loyal to him if he senses that you would be glad for any doctor, or any man who has his own business, or any decent man who wants to be married and have children.

You’d be surprised how fast a man can pick up that not just he, but anyone like him, would do. And you would be surprised at how fast his gut reaction tells him to back off and find a woman who would love him, no matter who he was. Every man wants to believe that his woman wouldn’t trade him in, even if she could, for someone with more money or a brighter future. Once a man is convinced of this, he can have the kind of gut reaction that leads to marriage. When he doesn’t have that feeling, commitment phobia occurs without any explanation given.

2. Show him that you’d love him even for “better”. If you are at all sympathetic, you’ll find it easy to pitch in when your man is down. If he’s under last-minute pressure, or a parent of his is ill, you can show the kind of loyalty that will give him confidence in you for the future. Being maternal and understanding may be easy when the guy’s in pain. But, ironically, it’s often much harder for a woman to show a man her loyalty when he’s up rather than when he’s down.

You are going to discover strengths, opportunities, and gifts that your man has which you weren’t aware of, and these will present a special challenge. Maybe you resent the fact that many people listen to your man more than to you just because he is a man. You see prejudices in his favor. When he calls the restaurant, you get the table by the window. Not so when you do, and the hostess is much less polite. It may be hard sometimes not to resent him for the sexism in our society. In many places, it’s still a man’s world, but that’s obviously not his fault.

It can be hard to remember this, though, if he gets promotions more easily than you do and now he has the extra cash to add an office to his house or to easily take care of an ailing relative. You wish that you could do these things. Though at times you benefit from his money, at other times it may sting when you realize that he has such advantages. Be careful not to let envy of him make you less loyal than you could be. And be careful too never to treat him as if money alone should solve all his problems. You know better.

The more successful a man is, the more sensitive he probably is to this aspect of the loyalty issue. A successful man knows that women want him. But why? It’s tricky. He’ll want to impress you with his big co-op apartment or with his great job. These are part of his Masculine Pretense. But here’s the catch. As the relationship deepens, he will worry that the very things he used to get you interested are all that you care about. Successful men may be paranoid about what you really want. Are you loyal to the lifestyle that he can offer you — or to him?

In my office, I see many successful men who have loyalty concerns about the women they’re involved with. The trouble is that these men were already successful by the time they met the woman. They might have felt convinced of the woman’s love of them as individuals if they had known her and been chosen by her before their success, but this wasn’t the case.

Suppose the man you care about and want to marry is already doing pretty well. Let’s assume that you really do love him for himself. How can you convince him of your real loyalty to him, that you would have chosen him without the trappings of his present success? How can you make him feel that he is irreplaceable, that even if he lost everything, you would still be with him?

Remember to keep emphasizing the personal qualities that made his attainments possible. If he has a successful business, praise him for the perseverance and skill that helped him get it. If he’s a professional, appreciate the struggle that he endured to get through school and achieve expertise in a competitive field. If he’s a bodybuilder and he wants you to love his biceps, he also wants to know that you would love him if his biceps collapsed. Praise him for his will and discipline. Tell him, if you believe it, that he can do anything that he sets his mind to, and you will be showing loyalty to something about him that he can keep forever.

3. Most importantly, show that you understand that his challenges are the same as anyone else’s. No matter how successful or attractive your man is, he will always have ups and downs, just the way you will. His having more money or prestige doesn’t make the downs any easier for him to take.

Maybe your man is upset because he feels taken advantage of in a business deal. You can’t help thinking that he made more money out of the deal in a few months than you make in a year. Still, because your man’s business partner broke his half of the agreement, your man feels cheated, hurt, and unsure of his ability to judge people. Incidents like this give you a very special chance to show that you really care about him. Recognize that even though your man is still financially secure, right now he is suffering, and this is what counts. Give him the sympathy and understanding that he needs, and you will prove that you are loyal to him as a person.

If all you can see is that he is “rich” anyhow and ought to be happy with what he has, you are saying that what counts is what he has, not what he feels. You would be communicating not just envy but also the belief that people who have money don’t deserve sympathy. Acting this way would induce in your man a terrible gut reaction to you. He will feel that you really don’t care about him, that you feel that his money can take care of him, and that you don’t have to. If you want to share his lifestyle, you must show loyalty, which means never holding money or success against him by being unsympathetic. Many relationships between people with radically different incomes fail because the person with less is envious and lacks sympathy.

The more successful your man is, the harder you may have to struggle inwardly to see him as your equal. But the only way you can have a lasting love affair with him is to see right from the start that he needs the same kind of love and nurturance that you do. If you feel this way, and convey that you do, he will know it unconsciously and have a wonderful gut reaction to you.

A good way to show your man that you see past the externals of his life is to show him that you don’t judge other people by their social status. Do you treat a waiter or a beggar on the street with respect? Or do you have a different way of relating to everyone, depending on how successful the person is? Your man can’t help identifying himself with the underdogs in life, and if you turn your back on people routinely when they slip a bit, he will worry about your loyalty.

For more information on the male perspective check out WHY MEN WON’T COMMIT by Dr. George Weinberg.

Need help building more intimacy in your relationship? Here are 5 mantra to live by. 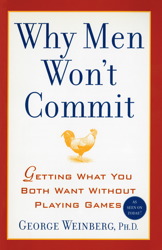