Living alone creates habits that might not fly in front of other people. After years of it, you may believe you’ll never fit in with someone else’s lifestyle. Some of us may develop these quirks to protect ourselves from dating the wrong person. When the right one came along, I was happy to compromise. Read more in All The Single Ladies.

In a 2012 New York Times story about people who live on their own, Sasha Cagen, founder of a website called Quirkyalone, described making herself dinners of a single sweet potato, while writer Kate Bolick, author of the 2015 book Spinster, confessed that she grazes on nuts and seeds and wears a pair of giant white bloomers. One unmarried woman told the paper, “I’ve been living alone for six years and I’ve gotten quirkier and quirkier,” running in place during commercials, speaking French to herself, and keeping her clothes in the dryer, removing only the items she wants to wear that day. The ability to make unconventional choices about wrinkled wardrobes and seed-scattered pantaloons contribute to what Cagen described as “a freedom to really let loose and be yourself when you live alone that a lot of other people may envy.”

Until the worry sets in that you might not be able to undo your own attachment to independence and its attendant eccentricities. In the years I lived alone, I worried, and was regularly warned, that I was growing more intractable in my habits, becoming so set in my ways that I would never be able to make room for another person.

These anxieties were not entirely misplaced. It is true that when single, I swiftly chased off any men whose threatened disruption of my Saturday mornings, which I set aside for breakfast on my own and a ridiculous apartment-cleaning ritual that involved dancing, I found too irritating to bear. I felt smothered by suitors who called too often, claustrophobic around those who wanted to see me too frequently, and bugged by the ones who didn’t want to try the bars or restaurants I liked to go to, or who pressured me to cut out of work earlier than I wanted to cut out. I got used to doing things my way; I liked doing things my way. These men just mucked it all up. I knew how I sounded, even in my own head: picky, petty, and narcissistic. I worried about the monster of self-interest that I had become.

In retrospect, however, I see that the fierce protection of my space, schedule, and solitude served as a prophylactic against relationships I didn’t really want to be in. Maybe I was too hard on those guys, but I am also certain that I wasn’t very interested in them. I am certain of that because when, after six years without a relationship that lasted beyond three dates, I met a man I was interested in and didn’t think twice about Saturday mornings, about breaking my weirdo routines or leaving work early; I was happy every single time he called. 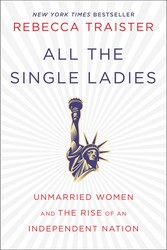