It’s no surprise that for years and years and years women have found Casanova irresistible. Read the Casanova-inspired seduction tips below (and more in my book Casanova: The World of a Seductive Genius) to help you master the art of seduction.

1. To make a woman feel special, do something special. For a seductive soiree, Casanova rented an elegant five-room apartment. He met his love as she stepped off the gondola that had brought her, and he escorted her arm-in-arm across a square to their trysting place. Once there, he plied her with liquor, and smoked duck, and ices. Of course, she succumbed.

2. Privacy is sexy. When Casanova set out to seduce a particularly sexy nun with a reputation to protect, he warned the apartment staff not to disturb them. Dinner was served through a pass-through, allowing the waiters to deliver the food without being seen or heard. There was nothing to distract the two lovers. Casanova gave her his undivided attention, and the nun felt free to be herself and swoon.

3. Admire her from all angles. Casanova’s rented apartment contained mirrors and candles so that his love would be “reflected a thousand times.” He knew that a beautiful woman enjoys looking at herself and that she “felt sexier because of it.” Casanova did more than tell a pretty woman that she was beautiful; he complimented her intelligence and ideas.

4. Ask what she thinks. Casanova spent much of his time asking questions and listening carefully. In an age when women were considered inferior to men, such behavior was highly flattering. He treated his guest reverently, and expressed genuine interest in her perspective. He made the woman feel valued. He touched her heart before he touched her body.

6. Casanova sought to appeal to all the woman’s senses. He scented his apartment with flowers because he believed they were an aphrodisiac. He served oysters and champagne as an appetizer because on the tongue only one thing is more titillating. He created an atmosphere of lavishness and luxury. And he touched her gently to maintain the true focus of the evening. By stimulating every sense, Casanova made his woman feel alive and sensual.

7. Savor the anticipation. Although Casanova became aroused when he saw his love’s breasts covered by dainty chemise, he didn’t force himself upon her. He was patient. He accepted her kiss and promise: “After supper.” He emphasized that neither he nor his love should be anywhere except together. Intimacy was the order of the day —and night.

8. Be playful. Casanova served sexually suggestive food and drink: glistening, tangy oysters, succulent game hens, soft cheeses, and ripe sweet fruit. He enjoyed watching women put these things in their mouths. When a slippery oyster fell onto an ample bosom, he bobbed after it and sucked it into his mouth. Casanova realized that sex was playtime for adults.

9. Be spontaneous. Casanova was an opportunist. He drifted from country to country, working at diverse jobs, often impersonating nobility, and one occasion pretending to be a fawning waiter in order to gain the attention of his female quarry. On another occasion, while sharing a carriage with a woman during a severe storm, he found her on his lap after a frightening thunderclap. Seizing the opportunity, he deftly rearranged her skirts and took maximum advantage of the situation.

10. Surprise her with a gift. On one occasion, Casanova and his love retired to a candlelit alcove, where he presented her with a beautiful lace nightcap. She pronounced it “magnificent.” It was the coup de grace. “She told me to go undress in the next room,” writes Casanova, “promising to call me as soon as she was in bed. This took but two minutes.”

Casanova was always attentive to the woman’s pleasure, and encouraged her to enjoy what he called “la jouissance,” or climax. If she felt fulfilled, ecstatic, and secure in his arms, he knew she would want him again.

Sexy nuns aside, who wouldn’t want a seduction like this? To make sure you have a good chance of finding such a gentlemen, know how to assess your online dating choices. 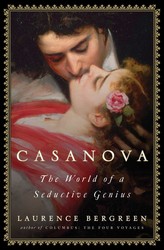 The definitive biography of the impoverished child, abandoned by his parents, who became the famous writer, notorious libertine, and self-invented genius whose name still resonates today: Giacomo Casanova. Today, “Casanova” is a synonym for “great lover,” yet the real story of this remarkable figure is little known. Giacomo Casanova was raised by his maternal grandmother, an illiterate peasant. His birthplace, Venice, was a republic in decline, reputedly the most debauched city in Europe. Casanova would add to the republic’s reputation. Over the course of his lifetime, he claimed to have seduced more than 100 women, among them married women, young women in convents, girls just barely in their teens, and in one notorious instance, his own illegitimate daughter. And he wrote what many consider the greatest memoir of the era, the 12-volume Story of My Life. A figure straight out of a Henry Fielding novel: erotic, brilliant, impulsive, and desperate for recognition, Casanova was a self-destructive genius. This witty, roisterous biography exposes his astonishing life in rich, intimate detail. At the same time, it is a dazzling portrait of eighteenth-century Europe from serving girls to kings and courtiers. Esteemed biographer Laurence Bergreen brings a sensual world vividly alive in this irresistible book.