Psychologists just concluded that watching romantic movies with your spouse lowers your chances of getting a divorce, so this list of movies that celebrates romance is not just for Valentine’s Day. Whether these will help save your marriage, we can’t say, but if you’re a fan of Cary Grant, Jane Austen, teen angst or kickboxing (the sport of the future), these are just what the doctor ordered.

Possibly Hitchcock’s most romantic movie (due in part to producer David O. Selznick, who oversaw Gone With the Wind), pairs U.S. spy Cary Grant with Ingrid Bergman, the daughter of a Nazi war criminal. After they begin an affair, he persuades her to spy against her fellow Germans, now living in Brazil. She enters into a loveless marriage while still in love with Grant. The scene where they kiss, then break apart, then kiss again, was designed to thwart the censors’ rigorous time limits on lip locks. When she realizes he does still love her, and comes to her rescue, it’s hard not to swoon a little.

This sweeping, epic romance takes place against the backdrop of the Russian revolution and World War I: Yuri Zhivago (Omar Sharif) and Lara (Julie Christie) are both, unfortunately, married to other people when they fall madly in love. The scenes where Yuri and Lara steal some time together in an isolated, snowbound shack where he writes her love poems that make him famous but draw the wrath of the government. Even though everything is against them, they manage to find love in chaos, at least for a time.

3. An Affair to Remember

They don’t make them like this achingly romantic Cary Grant and Deborah Kerr classic anymore. A woman is so overcome with love that she’s looking up to where she’s meeting her lover, not at the car that’s about to hit her and paralyze her. Afraid to burden him, she never tells him what’s happened, or why she never kept their rendezvous. He’s left to think she simply abandoned him and when he discovers the truth, he can’t tell her he still loves her fast enough.

So many of the most romantic film romances are the ones that are doomed never to find a happy ending, like this tale of a penniless lad (Montgomery Clift) who falls for a beautiful rich girl (Elizabeth Taylor). He can’t believe she loves him too. It’s too bad there’s also his pregnant girlfriend in the picture. The close-up scene where she whispers, “Tell Mama all,” is sublime and Taylor these two stars were never more beautiful.

The sweet, small-town romance between Mary (Donna Reed) and George (Jimmy Stewart) face a number of obstacles, including the fact that he’s eager to see the world. Forced to stay in town, he finally succumbs to his feelings for her, but on the night of their honeymoon, a run on the bank means he has to give away the cash for their planned trip. His friends and new bride fix up a run-down old house into an unexpectedly romantic honeymoon suite, even if the roof leaks.

When new grad Lloyd Dobler (John Cusack) decides to ask out the overachieving class valedictorian, his friends tell him he’s aiming too high. But Diane Court (Ione Skye) has never made time for romance amidst her busy college prep, and the two are soon swept up in a passionate affair. Who can forget that soaking-wet-from-the-rain scene in his car? She unceremoniously dumps him, leading to the classic scene where he goes to her house and holds up a boombox blasting the song playing when they first made love, “In Your Eyes” by Peter Gabriel.

7. The Last of the Mohicans

The love between Cora (Madeleine Stowe) and Hawkeye (Daniel Day Lewis) grows slowly as he escorts her and her sister through the hostile American wilderness in search of her father. The tension builds until their passionate first kiss (starting at 1:10 in this clip), where they don’t even need to say anything. Circumstances tear them apart, but who can forget his heartfelt declaration, “I will find you!”

Two sisters – the sensible Elinor (Emma Thompson) and the impetuous Marianne (Kate Winslet) – both find love but also bitter heartache when it seems the one they love will never be theirs. Were more romantic words ever spoken then when Elinor’s love Edward reveals he is not married, as she thought, and stammers, “I-I’ve come here with no expectations, only to profess, now that I am at liberty to do so, that my heart is, and always will be, yours.”

This modern update on Shakespeare’s Taming of the Shrew starred the much-missed Heath Ledger as Patrick Verona, a mysterious exchange student who’s paid to take out the antisocial Kat Stratford (Julia Stiles) so her younger sister can also date. Having blown his chance to kiss her, Patrick goes all out to win her back by serenading her with “Can’t Take My Eyes Off of You,” with the accompaniment of the school band! She can’t help but laugh… and take him back. The poem she writes him at the end of the film is also a killer.

This underrated romantic comedy stars Sanaa Lathan as an ambitious businesswoman who has a whole list of what she wants in a man, and handsome, laidback gardener Simon Baker is nowhere on it. But she can’t deny her feelings (or the palpable screen chemistry here) and the two begin dating, much to the disapproval of her friends and family. The finale, where she brings him to a formal event after dressing him up in a fancy bolero jacket — declaring that he’s her guy to the world — is sweetness itself. 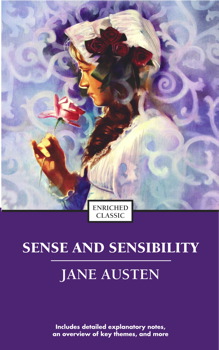 Sense and Sensibility
by Jane Austen

A timeless tale of romantic manners and mores in which two vastly different sisters experience love and loss under the rigid view of British society.