It’s a new year and time for a new start on your resolutions to get in shape, eat better, slow down and, as at least one celeb tweeted, read more books! (A resolution we can definitely get behind.) While most stars were sharing the usual goals of fitness or learning a new skill, count on Kanye West to promise not to rant… for at least six months.

Here’s a few of our other favorite celebrity New Year’s resolutions:

Hilary Duff sent out a photo tweet: “Making a resolution to read more books in 2014 and get more involved in my community.’

Kanye West promised “This might be the last time y’all hear me talk s–t for a long time. Might be another like six months. At least.”

Snooki tweeted, “My New Year’s resolution? To build a muscular ass. ‪#squatssquatssquats.” She’s been tweeting pics of her workouts since then.

Julie Bowen (Modern Family) vowed to People, “I want to get my teeth whitened and not drink coffee five minutes after. I finally got my teeth bleached this year and it was so hard. I was drinking through a straw… I’d like to preserve the tooth whitening process for more than a day next year. That’s a dream of mine.”

Fergie (Black Eyed Peas) told People, “Stay consistent with my workout and eating healthy because being a new mommy it’s easy to just grab whatever’s there and to throw the workout out the window.”

John Lithgow also confessed to People, “I’d like to improve a lot of my technique, playing the guitar, banjo, painting. My tennis is getting worse instead of better. I’m going to try to reverse that.

Trisha Yearwood explained to People, “I think I spend a lot of unnecessary time trying to make sure things are in order and planned out exactly when I would like to learn how to just roll with it a little better.”

Sanaa Lathan (The Best Man Holiday) said, “I would like to readjust into more of a healthy lifestyle. Not as much sugar, not as much meat.”

Singer Ed Sheeran admitted he’s not good at resolutions: “I should probably cut down the junk food. And the beer. And the cigarettes. Which I won’t, because I say that every year and I never do.”

Millionaire Matchmaker Patti Stanger shared, “I would like to learn how to ski.”

Diego Klattenhoff (The Blacklist) told People, “I would like to get a little more sleep, if I can. Try to hit the gym a little more, maybe.”

Taylor Kitsch (Lone Survivor) told the NY Post that he’d like, “More guitar. [I play] a bit, but obviously not as much as I want to.”

Lucy Hale (Pretty Little Liars) revealed to the NY Post, “I tend to always think ahead, and I don’t enjoy what’s happening at the time. So I want to enjoy every day and take it all in. A lot happened this past year, and although I did enjoy it and was very grateful for it, I feel like I could have enjoyed it even more.”

Kathleen Hanna (lead singer Julie Ruin, Bikini Kill) explained to the NY Post her resolution was, “To stop being so addicted to stress. I need to get better, and I’m not going to keep getting healthier if I don’t do yoga and stuff like that. I love stress, I overcommit. It happens to people with autoimmune illnesses. As soon as you get well, you have to make up for lost time. You’re constantly making up for lost time. It’s like driving 100 miles an hour with the brakes on.”

Kathy Griffin joked during CNN’s New Year’s Eve show, “My resolutions are to eat more carbs, be more negative, swear more and offend more people than I did in 2013.”

Dean Koontz (Author) told the NY Post: “For years, my wife and I have worked with Canine Companions for Independence, which provides assistance dogs to people with quadriplegia, spina bifida and other conditions. We have met hundreds of people with severe disabilities and have never heard one of them complain, because they are intent on living their lives to the fullest. Every year, my resolution is to remember always that my most serious problems are mere nuisances compared to those of others, that happiness is a choice, and that the proper response to the vicissitudes of life is profound gratitude for life itself.”

Natalie Dormer (Game of Thrones, Elementary), told People, “I don’t want to do anything different. I’m quite happy trussing along as things are going at the moment and more of the same would be just fine by me.” 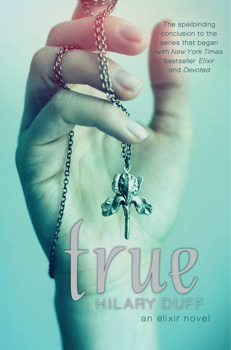 The epic love story of Clea and Sage comes to its thrilling conclusion in the final book in the Elixir series by multitalented star Hilary Duff.

Following the harrowing events of Elixir and Devoted—and the ceremony that almost killed Sage—Clea faces a new reality: With Sage’s soul in Nico’s body, the love of her life looks an awful lot like her best friend’s boyfriend. Can Clea and Sage really be happy under these circumstances?