Squads, I am told, are a big deal these days. My formative years were a long time ago, so the word “squad” still has some very bad connotations for me—death squads, Geek Squad, squads of cheerleaders who viciously ignored me in high school. But these days, due to the magical powers of Taylor Swift in her final human form before the Singularity, squads are all the rage. Learning this I had one of those moments when you realize you’ve been cooler than suspected for a long time, because I’ve been relying on a squad for the past decade or so: my squad of brother-in-laws, who have helped me survive every holiday season since I married my wife, known internationally only as The Duchess.

The Independent Nation of Texas Welcomes You
My wife is from Texas. Not just from Texas, but from a tiny town in the middle of what’s known as Hill Country. This is a place where people still wear cowboy hats unironically, everyone hunts, and people from New Jersey are assumed to be both Communist in their political leanings and Italian in their ethnicity. Texas is very much a world unto itself, and when I first traveled there for the holidays I was greeted with the sort of mixed dread and excitement that normally accompanies the morning after a natural disaster. I was regarded as a Yankee, a strange “soft” type of American citizen who probably didn’t know much about, well, anything.

My initial experiences were terrifying. My father-in-law pulled out the largest rifle I’d ever seen (a sharpshooting gun that seemed about 20 feet long) and walked around with it, giving me looks. There was deer sausage hanging everywhere. And every time a George Strait song came on the radio, everyone stood and removed their hats. It was a disorienting and amazing time.

What saved me was the simple common ground I shared with the three men who had married my wife’s sisters: They were all Texans, yes, but they’d also been examined by my father-in-law and found wanting, generally, in some way. I found in my new brothers a team of sympathizers, a network of supply lines, and a wealth of wisdom that helped me survive not just that first holiday season, but each holiday since.

There have been bottles of good whiskey hidden around the ancestral home for my emergency application. Rescues at social events when distant relatives of the wife began the “politics conversation.” Patient explanations of hunting culture, family history and mythos, and peerless advice concerning beer, line dancing, and barbecue have all served to prove the In-Law Squad’s value over the years, and have transformed Texas from an intimidating place to a heck of a good time.

My advice for anyone heading to their in-law’s home for the holidays: Form your own squad of Brothers or Sisters-in-Law. They have the up-to-the-minute intelligence and political connections to make your holidays a lot easier (especially if they do the hidden whiskey thing). 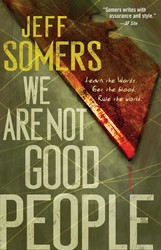 We Are Not Good People
by Jeff Somers

From the “exhilarating, powerful, and entertaining” (Guardian) storyteller of the Avery Cates series comes a gritty supernatural thriller featuring a pair of unlikely heroes caught up in the underground world of blood magic.