With summer vacations around the corner, a PSA that sometimes travel details can go terribly, horribly wrong. It happens even to the wealthy and famous, who aren’t immune to food poisoning, sea urchin stings, or lousy weather.

Actor Andrew McCarthy has become an expert globe trotter, as he recounts in his book, The Longest Way Home, but he’s had his share of blistered feet and bad experiences. He told Yahoo’s Travel Blog: “Got a flat tire at night on a dirt road in a remote section of Mozambique and had no spare. At dawn, distant drums began pounding. Eventually, made it to the still war-ravaged city of Beira. Spent a few days in the malaria capital of Africa before we could get a flight out. Not a great start to a honeymoon.”

Michael Emerson (Lost, Person of Interest) also had bad luck on his honeymoon. The actor revealed to Yahoo, “We chose poorly for our honeymoon. We were tired, stressed out and had been going 100 miles an hour for weeks. We decided to go to London. All of a sudden there were so many things we thought we had to do–shows, historical sites, museums. We crashed and burned. It was within a week of our marriage and I’d say one of the darkest times in our marriage.”

Luis Guzmán (How To Make It In America) told NBC Latino that a trip to the Atlantic Ocean did not go as planned. “I took a road trip to Bar Harbor, Maine, in an RV with my family when the kids were really little, with the idea we’d all jump into the ocean and enjoy the beach. But when the kids stepped into that [cold] water, they said, ‘Papi, you’re crazy; and came running back–there was no way they were getting in! And that was the end of that road trip.”

Rosanne Cash told the Chicago Tribune bad weather made a tropical trip the country singer’s worst vacation ever: “[It was] a freezing cold spring break in the Bahamas, where it rained so much that the cottage we were in flooded and the rugs and furniture were leaking with water.”

Tron Legacy star Olivia Wilde shared a disastrous experience in Jamaica with David Letterman, where her “romantic” kayak trip with fiancé Jason Sudeikis ended with them having to be rescued by fishermen. “We got to shore and we got our courage back and we decided to do something safer,” she said, before admitting that their next activity was far from safe. “So, we went out to a little floaty island about 15 feet from shore, and on my way back in I got stung by a swarm of jellyfish. So then I crawled out and I was covered in welts. And Jason, of course, is still stuck on the floaty island looking at me like, ‘I can’t get in there.’ So I had to go and get the same rescue team to come back with a kayak to get him.”

Tina Fey recalled to Yahoo how her honeymoon cruise went down in flames: “The ship was on fire, so we had to go and stand by our lifeboats… and we really had to stand women and children in the front, men in the back, and I remember holding hands with my husband, thinking like, ‘Oh my gosh, we’re gonna be one of those people on the news that died on their honeymoon!'” The 30 Rock star still managed to put a humorous spin on the situation (at least in retrospect): “[My husband said] he was thinking, ‘It’s gonna be so hard for her when they bring the lifeboats down and she stays with me.’ I was thinking, ‘It’s gonna be so hard for him when I get on that lifeboat.'”

Italy proved to be one nightmare after another for Claire Forlani (Meet Joe Black, CSI: NY), as she told the Chicago Tribune. She thought she’d be sailing around the South of Italy on a friend’s yacht, but it ended up being just a sailboat. “I got the worst seasickness ever, so I couldn’t appreciate any of the beauty that surrounded us. I ended up getting off the boat in Panarea in the middle of August, which is when the entire country of Italy seems to be on holiday. So it was impossible to find a hotel room.” Sure enough, she was told there were no rooms available, but a kindhearted hotel employee said there was a room, if she wanted it. “This very sweet man walked me to an obscure part of the hotel and showed me what could only be called a rather large closet, which had a single bed in it and a toilet.” She was thrilled, until that night. “Sleeping soundly in my wonderful closet, I was awoken by this thumping sound and a vibrating wall by my bed. My closet wall was the wall that also belonged to the hotel’s nightclub, which played techno till the sun appears in the early hours of the morning!”

Who hasn’t had the nightmare of lost luggage? Franklin & Bash‘s Breckin Meyer told Yahoo, “Was attempting a very romantic trip and was delayed on the runway when a terrible storm started dumping rain. From my window seat, I watched my bags getting demolished by the rain. On the bright side, the airline lost my luggage. I spent that sexy vacation wearing a gift shop bathing suit with that weird underwear sewn in and a sweet peach-colored tank top with the hotel logo on it.”

Bad weather ruined Steven Bauer (Ray Donovan)’s trip to Mallorca. He dished to Yahoo, “I’d booked a hotel on the rocks, overlooking the ocean. It rained for three days and there was nowhere to go. That kind of situation–going somewhere that requires great weather–can turn bad really quickly if it happens to be the one time of the year squalls and thunderstorms hit. It can destroy a vacation.”

Alexandra Breckenridge (True Blood, American Horror Story) shared a painful experience with the Chicago Tribune: “I was in Jamaica and stepped on a sea urchin. I had stingers in my foot for two days and could barely walk.”

House of Lies star Larenz Tate admitted to the Chicago Tribune that a moment of inattention ruined both his camera and his vacation: “I was chasing after my kid in the water in the Dominican Republic and I forgot that I had put my camera in my pocket. We lost all the pictures on it. My wife wanted to know why I hadn’t backed any of it up and I had no good answer for her. So, everyone, remember to back up your pictures!” 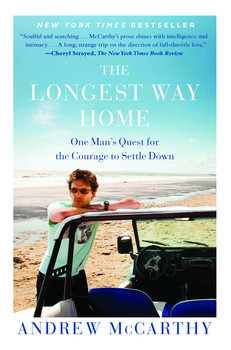 WITH ABSORBING HONESTY AND AN IRREPRESSIBLE TASTE for adventure, award-winning travel writer and actor Andrew McCarthy takes us on a deeply personal journey played out amid some of the world’s most evocative locales. Unable to commit to his fiancée of nearly four years—and with no clear understanding of what’s holding him back— McCarthy finds himself at a crossroads, plagued by doubts that have clung to him for a lifetime.