Ah, #$@! it. We all know cursing is a social landmine, but sometimes—when you bang your elbow, are having a bad day, or maybe even had a teensy bit too much to drink—you unleash a blue streak that could cause the heavens to weep. But is it as good for your health as say, a long, mind-clearing run, meditating with the Dalai Lama or brain-calming exercises?

It’s true, according to some very interesting research that shows swearing may actually be good for you. In a study, participants who swore while submerging their hand in ice water were able to endure the pain longer than those who didn’t or simply uttered non-curse words.

Interesting indeed. And while it doesn’t give you license to start talking like a salty sailor, the research does reveal a rather crucial element of the way our brains perceive pain, and at the very least, helps make us feel less guilty when the occasional profanity slips out.

Scientists believe that there is a deep, psychological reason that swearing is our instinctive response to a stubbed toe or banged forehead. They found that expletives actually tie into a different part of the brain than other language — the primal, emotional side that also controls our survivalist and defensive reflexes.

And that’s good news. We have a wonderful (and, let’s face it, kinda fun) way to cope that, it turns out, is as natural as our fight-or-flight instincts. But what about all that other swearing? You know, the kind that’s really rude, thrown around in schools, comedy clubs, or from the mouths of angry drivers during rush hour?

There’s no denying that harmless venting (the operative word being harmless), social bonding, and a few good laughs are good for us, too. But angry swearing can be hurtful, and overusing it can actually reverse its benefits. The study also found that the more you swear, the less it’s tied to your emotional responses. Without emotion, the word loses its power.

Curses: More about Swearing
—Does Profanity in the Workplace Boost Morale?
—The History of Swearing: Where Did Curse Words Come from, Anyway?
—Why Do We Swear? 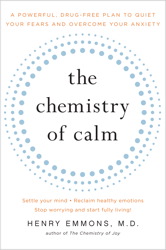 The Chemistry of Calm: A Powerful, Drug-Free Plan to Quiet Your Fears and Overcome Your Anxiety
by Henry Emmons, M.D.

The debilitating effects of anxiety can affect your sense of well-being, health, longevity, productivity, and relationships. In The Chemistry of Calm, Dr. Henry Emmons presents his Resilience Training Program—a groundbreaking regimen designed to relieve anxiety and restore physical and mental strength. This step-by-step plan for mental calmness and emotional wisdom focuses on ways to create resilience as a key to resolving anxiety in everyday life, incorporating the latest science on: • DIET—you’ve got to eat good food to feel good • EXERCISE—it’s proven: moving makes you less anxious • NUTRITIONAL SUPPLEMENTS—boosting your natural anxiety resistance • MINDFULNESS—including meditation techniques to calm your body and brain Marrying the Eastern techniques of meditation with the traditional Western solutions of diet and exercise produces a dramatic effect. Using this program, Dr. Emmons has helped countless patients reduce their anxiety and reclaim the resilience that is their birthright. Now, with The Chemistry of Calm, you can be anxiety free too!