We’re often told that skim milk is healthier than whole, but not if you’re trying to conceive. Here’s why, from Be Fruitful: The Essential Guide to Maximizing Fertility and Giving Birth to a Healthy Child.

This may seem contrary to everything we’ve been told about dairy consumption. We tend to be concerned about the saturated fats in dairy; however, what most of us don’t realize is that when the dairy companies remove the fat from milk, they alter its hormonal content. To prepare low-fat and nonfat dairy, whole milk is spun at high speeds to separate the fat from the water. Hormones separate differently according to their preference for fat. Estrogen and progesterone prefer fat, so that when milk is being separated, those hormones go into that layer. Androgens, insulin-like growth factor one (IGF-1), prolactin, and male hormones prefer the watery layer—hence a glass of low-fat milk gives you more male hormones and fewer female hormones. Prolactin is the hormone that induces milk production after childbirth; it also helps prevent you from getting pregnant when you’re breastfeeding, and it is present in greater amounts in skim milk. IGF-1 decreases sex hormone binding globulin, thus resulting in more circulating testosterone—another fertility zapper.

If this were not problematic enough, consider what is added back into skim milk once it’s separated. Skim milk usually has a bluish tint, which the dairy companies feel is unappealing to consumers. Usually they add either nonfat milk powder or whey protein to get rid of the blue color. There is evidence that when animals’ diets are enriched with whey protein, its androgenic effects decrease fertility.

Another important milk consideration is that in the United States, we milk pregnant cows very far into gestation. This is not traditional milking practice, but for the most part, farmers in this country are trying to maximize profits from their cattle. Since cows are mammals, when they advance in pregnancy, they have a lot of hormones circulating in their milk; this is perfectly “natural” for all mammals, but does not make for an ideal beverage for humans. Even organic dairies tend to milk the cows deep into pregnancy. One great source of information about milking practices is Cornucopia.org, which rates dairies. Some states don’t have a single dairy that follows the better organic dairy-farming practices.

An alternative to cows’ milk is goats’ or sheep’s milk products. Animal husbandry practices are not (yet) a problem for these animals. While not everyone likes the taste of goats’ milk, the cheeses from it and sheep’s milk are delicious and widely available. You’ll also have an easier time finding healthier yogurts made from goats’ and sheep’s milk because yogurt is easier to ship. 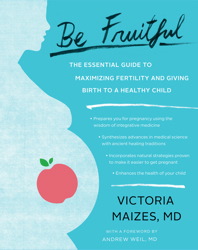 Be Fruitful: The Essential Guide to Maximizing Fertility and Giving Birth to a Healthy Child
by Victoria Maizes, MD

From an internationally recognized integrative physician, a thorough guide to fertility that encompasses all aspects of female well-being to help women prepare their bodies for easy conception, pregnancy, and the delivery of healthy babies.