The truth can occasionally have a gray area. In circumstances such as interrogations and interviews, our minds can trick us into believing in an event, statement, or instance that isn’t factual. Rowan Hooper, author of SUPERHUMAN, dives into the topic of false memories and how our brains can resist urges to believe things that aren’t true.

We all seem to be prone to believing things that aren’t true. To believing, faithfully but incorrectly, that things we didn’t witness did in fact happen in front of our eyes. Maryanne Garry, a psychologist at the University of Waikato in Hamilton, New Zealand, has studied the acquisition of false memories for many years. “My own hunch,” she says, “is that very few, if any, people would be immune to this effect given the right package of information, method, and circumstances.”

Jason Chan agrees. “Some people are a little more resistant to false memories than others, and frontal lobe functioning—which is related to source-monitoring ability and working-memory capacity—is typically thought of as an important factor.” However, resistance is one thing; immunity is quite another. “We are not aware of anyone who is not susceptible to false remembering at all.”

So are there any superhuman resistors? If anyone could be trained, or selected to be resistant to the tendency of our brains to soak up false memories like blotting paper, you’d think it would be the military special forces, whose training is particularly intense. Many countries train their elite soldiers to resist interrogation.

Charles Morgan III is a psychiatrist at Yale School of Medicine who has worked extensively with the US and Canadian military to advise on eyewitness memory and psychological performance under conditions of high stress, and to aid in selection for special forces. Subjects are typically serving military personnel undergoing special forces training. In the studies, soldiers take part in an intense roleplay exercise modeled on prisoner- of war conditions, being deprived of food and sleep for forty-eight hours, and then being “robustly” interrogated. A day after their “release” from the POW camp, the soldiers are asked to identify their interrogator in a lineup. Several of Morgan’s studies have found that many soldiers are unable to, some even mistaking the interrogator’s gender. “After they are ‘interrogated’ in what sounds like a brutally realistic way, large numbers of them just totally suck at recounting what happened, and at identifying their interrogator,” says Maryanne Garry.

For special forces soldiers it may not be a good thing to be susceptible to memory distortion, but most of us will never be captured and placed under intense stress. We have not evolved that way, and indeed our brains work differently. We are social apes; we learn from a range of different people, at different times and under different conditions, as well as from various cues in the environment. Our brains have to be malleable. “I think it’s pretty straightforward,” says Garry. “We have evolved to learn from multiple sources. We have not evolved to detect errors in the way we often encounter them in real life . . . from sources that otherwise seem legitimate, or trustworthy, or not worth the brainpower to scrutinize.”

Nevertheless, there are suggestions that some people are more resistant, at least.

Bi Zhu, of the Institute for Brain Research at Beijing Normal University, China, has worked with UC Irvine’s Elizabeth Loftus, a legend in the field of eyewitness memory, on testing whether some people have more reliable memories. Zhu ran experiments similar to the one I took part in at Royal Holloway. She had 205 Chinese college students watch staged “crimes,” and then had them answer questions on the crimes, while seeding them with misinformation. The first set of answers were given an hour after viewing the crimes, but the second test came a year and a half later. MRI scans were made to measure the volume of key structures in the brain. Students with larger hippocampi remembered more questions correctly, and were less susceptible to the false information. What we don’t know is how much genetics influenced the hippocampus size of those students.

Discover more about uncovering the truth by picking up SUPERHUMAN by Rowan Hooper.

Also from Tips on Life & Love: How to Improve Your Memory

Excerpted from Superhuman by Rowan Hooper. Copyright © 2018 by Dr. Rowan Hooper. Used by permission of the publisher. All rights reserved. 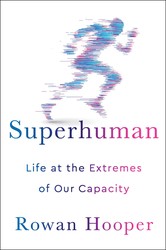 From evolutionary biologist Rowan Hooper, an awe-inspiring look into the extremes of human ability—and what they tell us about our own potential.In 1997, an endurance runner named Yiannis Kouros ran 188 miles in twenty-four hours. Akira Haraguchi, a sixty year-old man in Tokyo, can recite pi to the 100,000th decimal point. John Nunn was accepted to Oxford University at age 15, the youngest undergraduate in 500 years. After a horrific attack by her estranged husband, Carmen Tarleton was left with burns to over eighty percent of her body. One of her surgeons said her injuries “were beyond anything we have ever seen.” After a three-month coma, multiple skin grafts, and successful face transplant, Tarleton is now a motivational speaker. What does it feel like to be exceptional? And what does it take to get there? Why can some people achieve greatness when others can’t, no matter how hard they try? Just how much potential does our species have? Evolutionary biologist Rowan Hooper has the answers. In Superhuman he takes us on a breathtaking tour of the peaks of human achievement that shows us what it feels like to be extraordinary—and what it takes to get there. Drawing on interviews with these “superhumans” and those who have studied them, Hooper assesses the science and genetics of peak potential. His case studies are as inspirational as they are varied, highlighting feats of endurance, strength, intelligence, and memory. Superhuman is a fascinating, eye-opening, and inspiring celebration for anyone who ever felt that they might be able to do something extraordinary in life, for those who simply want to succeed, and for anyone interested in the sublime possibilities of humankind.