Traditional Chinese medicine and Indian Ayurveda have used the unique class of herbs known as adaptogens for centuries. New studies support their use to increase energy, stamina, endurance, and mental clarity. But what are adaptogens, exactly, and how do they help our bodies resist stress? In a preview of her book THE COMPLETE GUIDE TO ADAPTOGENS, author Agatha Noveille answers these questions and more.

The concept of plants with revitalizing or restorative properties that can enhance health has been around for thousands of years, although “adaptogen” is a modern word that has only been used to describe them since the 1940s. Many of the herbs that we know as adaptogens today were first used generations ago in Ayurveda (the traditional system of herbalism in India) and in traditional Chinese medicine (TCM).

In Ayurveda, for example, herbs such as amla, shatavari, and holy basil are classified as rasayana herbs. Rasayanas are herbs that increase vitality and are believed to promote youthfulness and increase resistance to illness. In modern herbalism, we use these three herbs along with many other rasayanas as adaptogens.

One of the concepts of traditional Chinese medicine groups herbs into three categories based on their actions and safety of use. Many herbs in the first category, sometimes translated as “superior” herbs, are valued for their tonic and harmonizing influence on overall health. Many herbs that we know as adaptogens today belong to this class of herbs, such as he shou wu, eleuthero, and schisandra.

So how did we come to describe these herbs as adaptogens? In the late 1940s, the government of the then-USSR instructed its scientists to create a substance that could be used to increase the performance of the country’s athletes, military personnel, and even elite chess players, so that they could dominate and excel in every international arena.

We owe the modern word “adaptogen” to the Soviet doctor and scientist Nikolai V. Lazarev. In 1947, he created the word from the Latin word adaptare, meaning “to adjust.” He used it to mean a substance that raises the nonspecific resistance of the body to stress so that the body is better able to adapt to stressful circumstances.

Eventually, the Soviet research into adaptogens—which had a strict focus on safety—turned away from chemical substances such as dibazol and began to focus on American ginseng. From there, research branched out to include other plants that also belonged to the Araliaceae family, such as eleuthero, and then to an even broader selection of herbs.

By 1968, Israel I. Brekhman, PhD, and Dr. I.V. Dardymov had developed the functional definition that has evolved into the understanding of adaptogens that we have today. According to the definition used by Brekhman and Dardymov:

A Note on Consistent Use: A pressing question for many people when they begin using adaptogens is: “Should I take a break from using adaptogens? If so, how often?” Adaptogens actually seem to work better with regular use, and you don’t usually need to worry about them putting a particular strain on the body or your body building up a tolerance. Personally, I like choosing one adaptogen to use at least once a day for a few months at a time before switching over to another or taking a rest. I find that it helps to periodically reevaluate my personal health goals and concerns when deciding which adaptogen to use. Our bodies change over time and it makes sense to change our adaptogens to match what’s going on with our health.

Want more? For 75+ easy recipes for potions and remedies to improve sleep, mood, focus, immune function, stamina, and general wellness and beauty, pick up a copy of THE COMPLETE GUIDE TO ADAPTOGENS by Agatha Noveille.

Related: Getting sick is the worst. Discover 4 supplements that boost immunity.

Excerpted from The Complete Guide to Adaptogens by Agatha Noveille. Copyright © 2018 by Simon & Schuster, Inc. Used by permission of the publisher. All rights reserved. 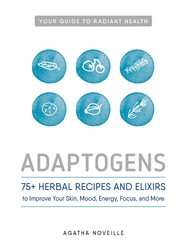 Harness the power of herbs to boost resilience, stamina, and brain function! Adaptogens are a unique class of herbs that greatly improve your body's reaction to emotional and physical stress while increasing your energy, stamina, endurance, and mental clarity. Inside, you'll learn about the health and wellness benefits of twenty-three adaptogenic herb. You'll also find more than 75 recipes for potions and remedies to improve sleep, mood, mental focus, immune function, stamina, and for general wellness and beauty. These all-natural, safe remedies fight the effects of chronic stress, while restoring your body’s balance, health, and vitality.