I was lactose intolerant, but took enzymes so that I could continue to eat dairy. A book called Don’t Drink Your Milk by Frank Oski, the former director of pediatrics at Johns Hopkins Medical School, convinced me to do a trial period without any dairy at all. In the book he cited numerous reasons why dairy products were unsuitable for both children and adults. My toddler, Miles, was already off of dairy, and I considered taking my young daughter, Laura, off as well. From Unraveling the Mystery of Autism and Pervasive Developmental Disorder.

The more I read about milk, the more I wished mankind had never thought to drink a product from the udder of a cow. How absurd that seemed, now that I gave it some thought.

Humans evolved for thousands of years, weaned from their mother’s milk by the age of three. Then suddenly, they continued the process of ingesting milk from another source—another species—because it was inexpensive, filling, and tasted good.

With a functional immune system, milk should be digestible. But what if environmental factors are altering children’s immune systems so that milk is no longer beneficial, but harmful? A few months later I read that Dr. Oski had died, and felt a sense of loss.

I decided to take all dairy out of Laura’s diet as well. She had no behavioral problems that I was aware of, but after reading about several studies linking milk to ear infections, sinus infections, and respiratory problems, I decided that there was no reason why she could not get her calcium from another source, such as the potato-based dairy substitute that Miles was using. Laura frequently asked for it instead of milk, and she ate plenty of protein. As far as I could tell, the only real health benefit from milk was calcium. The only one. And there were many other sources of that. How had the media made me think that it was the milk itself that was so important? It wasn’t just the photos of celebrities with milk mustaches, it was the idea that giving a child milk was equivalent to good parenting.

When I got home, I talked to Laura about the experiment, and she didn’t mind a bit. There did not seem to be any change in her behavior for the first few days, but something odd did happen. She was still suffering from night waking, which stopped immediately after she stopped drinking milk. No bad dreams, no crying out at night, nothing. For the last few months Laura had been up at least once each night crying and complaining that her room was shaking. When we asked what she meant, she merely sobbed, “It’s shaking—my room is shaking.”

Not conditioned by thirty years of milk drinking, Laura liked the milk substitute better than I did. But I learned to use it in my cereal, and enjoyed it in baked goods and homemade ice cream. I liked the fact that my stomach had lost its perpetually bloated feeling. Eight weeks later my motivation to use it grew even stronger.

At a friend’s house, Laura and I both ate some pizza. It was all there was to eat—I had forgotten to mention the dairy restriction when we were invited for lunch. Just this once, I told her.

That night, Laura was up four times, after two months of not waking at all, up four times sobbing the once familiar phrase, “My room is shaking.” As for me, my sinuses became blocked within half an hour. Then, a slow migraine began to creep up the back of my neck—the first one I’d had in months. Over the next year Laura on four occasions ate dairy by mistake, which coincided with exactly four episodes of night waking.

After having suffered from chronic sinus infections for most of my life, I realized that they had completely ceased. In fact, I was only sick once in an entire year—with a stomach flu that I caught at work. An entire winter miraculously passed without anyone in my family needing a course of antibiotics. Could this really be from removing the milk from our diets? 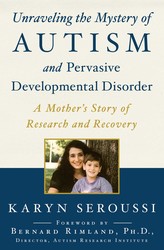