On the eve of her 40th birthday, successful New York City writer Glynnis MacNicol realized that there’s no clear path for women of a certain age who are single and child-free. So she decided to blaze her own trail that year, and the result is her memoir NO ONE TELLS YOU THIS. In a selection from the book, MacNicol recalls starting to understand at age 37 that the two very different visions she’d always had for her life might not both be possible. Soon she would have to decide: What’s next?

If someone had drawn a cartoon of me at age thirty-seven there would have been two equally sized thought bubbles over my head. Instead of words the first bubble would have contained an equation representing the sad reality that nearly everything in my life had become a shifting math problem with an immutable result: a baby. The calculation went something like this: I had x amount of activities in a week. If I met someone at one of them, how long would we have to get to know each other—a year seemed reasonable—before we’d need to be married so that it would leave enough time—six months perhaps?—to get pregnant before the cutoff (the cutoff being forty, the year in which a baby ceases to be a mathematical certainty and becomes a lucky roll of the dice). (Babies are never mathematical certainties, obviously, but that is one of those truths that is never true for you until it is true for you.) As thirty-seven became thirty-eight became thirty-nine the calculations became even more pressing and less feasible. Married next week, and pregnant the next morning? Time ticked on. Eventually there was no way to make the numbers add up. I couldn’t outrun my own clock.

The second bubble would simply have been a picture of me getting on a plane on short notice and leaving. By the time I turned thirty-seven, I was almost as consumed with the idea of getting away as I was with the conviction I was running out of time. Not traveling per se, just leaving. I was a media reporter in New York then, and I started my long work days from home. To the outside observer my job was glamorous: television appearances and glitzy parties. The reality was that it required me to chase website traffic like a shady lawyer going after an ambulance—clicks, no matter how ill-gotten, were the coin of the realm. Increasingly, early mornings had found me sitting at my desk in my tiny, sun-filled studio apartment (“It’s exactly the sort of apartment you dream of living in when you dream of living in New York,” my friend John said when he first saw it) where I paid twice as much rent as I’d ever paid in my life, listening to the garbage truck heave its way down the leafy streets of Brooklyn Heights, and wishing with every molecule of my being that I was the trash collector hanging off the back of it. All I could think as I gazed at it was: There is no internet on that garbage truck. Hunched over my desk, my BlackBerry buzzing like a trapped fly against a window, chat windows exploding on my screen with the urgency of dispatches being sent from a war zone, I spent months nearly paralyzed by my desire to be anywhere else.

That these two visions of my life were in direct contradiction with each other never once occurred to me. Not even a little bit. Neither did the fact that I wasn’t actually doing anything to make either outcome a reality. If anything, I was doing the opposite. When I wasn’t dating wildly inappropriate men, with whom there was little to no chance of building anything resembling a stable long-term relationship, I was working eighteen-hour days, nearly every day. Had I ever stopped long enough to consider things, I might have recognized the truth, which was that I’d never bothered to seriously question whether I actually wanted to be married with kids, or even just with kids (I’d at least Googled airplane ticket prices). I had simply taken it as a given, like financial security and regular exercise, obvious outcomes sane people generally aimed their lives toward. This lack of self-awareness was especially galling considering the singular focus with which I’d pursued other goals in my life. On paper at least, I was, by the time I turned thirty-seven, precisely where I had always wanted to be. I was a New Yorker; I was a full-time writer. Not just that. I was a full-time writer making a six-figure salary, plus excellent benefits, regularly appearing on TV to talk about subjects I’d written on. It was a position I had achieved less than five years after waiting my last table.

It hadn’t come easily. I had worked for it, relentlessly. For most of my thirties, I’d been on fire with determination. I’d been a pyre of ambition, fueled by what I considered all the lost time of my twenties. Which worked out admirably well, until I also went up in smoke. Or so it felt like to me. Life on the internet, the very thing that had allowed me to skip over the years of drudgery I knew had been required of nearly every established writer I’d admired, eventually caught up to me. There are no speed bumps in the digital world. No clocking out. No off switch. It was as though my career was a car racing across an endless plain, on a road with no speed limits, pedal to the floor: the only thing that was going to stop me was me. And that was exactly what happened. Five years into my career, at the top of my game, I didn’t so much stop as buckle under my own momentum. The fiery ambition that had once driven me to work eighteen hours a day, seven days a week, for years, consumed me until I burned up. Burned out.

To read all about Glynnis MacNicol’s journey of self-discovery the year she turned 40, pick up a copy of her memoir, NO ONE TELLS YOU THIS.

Plus: See why author Jen Kirkman is child-free by choice, and happy about it

Excerpted from No One Tells You This by Glynnis MacNicol. Copyright © 2018 by the author. Used by permission of the publisher. All rights reserved. 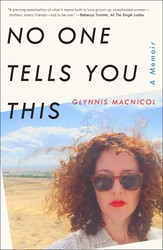 No One Tells You This
by Glynnis MacNicol

If the story doesn’t end with marriage or a child, what then? This question plagued Glynnis MacNicol on the eve of her 40th birthday. Despite a successful career as a writer, and an exciting life in New York City, Glynnis was constantly reminded she had neither of the things the world expected of a woman her age: a partner or a baby. She knew she was supposed to feel bad about this. After all, single women and those without children are often seen as objects of pity, relegated to the sidelines, or indulgent spoiled creatures who think only of themselves.

Glynnis refused to be cast into either of those roles and yet the question remained: What now? There was no good blueprint for how to be a woman alone in the world. She concluded it was time to create one. Over the course of her fortieth year, which this memoir chronicles, Glynnis embarks on a revealing journey of self-discovery that continually contradicts everything she’d been led to expect. Through the trials of family illness and turmoil, and the thrills of far-flung travel and adventures with men, young and old (and sometimes wearing cowboy hats), she is forced to wrestle with her biggest hopes and fears about love, death, sex, friendship, and loneliness. In doing so, she discovers that holding the power to determine her own fate requires a resilience and courage that no one talks about, and is more rewarding than anyone imagines.