Girls in this country are experiencing puberty earlier and earlier, and we think chemicals–plus the hormones in chickens, milk, and meat–may have something to do with it. Here’s why you and your family should rethink certain common household items. From The Hormone Secret.

Every single part of your life is either harming you or optimizing you. There is no middle ground. Take xenoestrogens, for example. These are compounds with estrogen-like activity. However, it’s bad estrogen activity that’s associated with the increased risk of cancer. The problem is that xenoestrogens are everywhere. You get up in the morning and brush your teeth. But have you ever read your toothpaste label? If you swallow any paste, you’re supposed to call poison control. Take a look in your shower. The soap, shampoo, and conditioners on the shelf all contain parabens, chemical preservatives that extend their shelf life. Parabens are also xenoestrogens. The towel you use to dry yourself contains residue from laundry detergent and fabric softeners that have xenoestrogens. And you put that residue in contact with the largest organ of your body—your skin.

If you drink nonorganic coffee, you ingest pesticides, which are xenoestrogens. And decaf has its own problems. Often it’s decaffeinated with methylene chloride, which the federal Occupational Safety and Health Administration (OSHA) calls a potent human carcinogen. The amount left on coffee beans during this process is said to be minimal, but I encourage you to avoid toxins whenever possible. The Swiss decaffeination process uses water and is thought to be the safest way to decaffeinate coffee.

Finally, let’s say the boss hands you a bonus, and you celebrate by buying a new car. You swing open the door, slide in, and inhale the satisfying “new-car smell”—which is produced by one of the most dangerous xenoestrogens, phthalates. Phthalates make plastics more flexible and harder to break.

Almost all hair conditioners are harmful. It took me twenty-five minutes at a department store to find one suitable for my daughter, who is only eight years old and has crazy-curly hair. I almost gave up on finding one without chemicals that act like xenoestrogens and disrupt hormones. I can’t expose her to fake chemical estrogen. We think such chemicals, plus the hormones in chickens, milk, and meat, may have something to do with the fact that puberty is developing earlier and earlier in girls in this country.

Antiperspirants/deodorants are another issue. First, let me explain the difference between the two. Antiperspirants attempt to stop you from perspiring; deodorants attempt to ensure that your perspiration doesn’t smell bad. Antiperspirants are much worse, because they contain aluminum. Studies to determine whether aluminum might cause Alzheimer’s disease were not well done (and used rabbits). Controversy continues about a possible connection between the two. Nevertheless, we do know that aluminum is not good for the brain (and tends to want to go to the brain). Aluminum also forms a temporary sweat-duct plug. What’s wrong with that? Remember, sweating is the body’s way of expelling toxins. Your body retains those toxins if you don’t perspire.

Sweat itself doesn’t smell. It’s the combination of perspiration, hormones, bacteria, and other substances that causes body odor. Deodorants are preferable to antiperspirants because they allow us to sweat, yet also mask the odor. My personal favorite deodorant is Arm & Hammer Essentials, which does not contain aluminum, is paraben-free, and uses natural deodorizers. There are other brands of natural deodorant, such as Tom’s of Maine, that do not contain aluminum.

The deodorant issue is critically important for girls, because they start to experience body odor between the ages of nine and eleven. Body odor is one of the very first signs of puberty. A period can be expected within a year or two. And what are you going to give a nine-year-old that won’t disrupt her hormones? Definitely a deodorant, not an antiperspirant. There are so many things in your life that you can’t control, but this is something that you can.

Although cosmetics and toiletries free of preservatives and other potentially harmful substances can be hard to find, they are available. Fortunately, you just have to do the research once. After you find the shampoo that you feel comfortable with, you can head directly to that brand. But the first time you’re going to have to read labels. My online shopping cart on drtami.com can help. I list foods, personal and health-care products, and other items that carry my stamp of approval. Finding the best, most affordable, and healthiest options can be time-consuming. I’ve done the research for you. 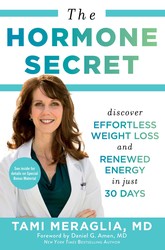 From an expert in integrative medicine, a thirty-day plan to help women lose weight and look and feel years younger. As they grow older, many women struggle to lose weight. The Hormone Secret offers an evidence-based plan to restore healthy levels of testosterone and balance the relative levels of other hormones, based on lifestyle modifications such as supplements and nutritional adjustments.