When author Daniel Smith called home in an anxiety-induced panic, his therapist mother instructed him to sit quietly and breathe deeply. It worked. For the short term, at least. From Monkey Mind: A Memoir of Anxiety.

My mother is the Billy Graham of therapeutic breathing. Many years ago, she had little rectangular signs made with the word “breathe” printed on them in flowery epigraphical type, to display in her office. She owns dozens of sheets of neon-orange breathe stickers that she distributes to anyone in need. Growing up, one was posted on our refrigerator and another on the wall just beneath the kitchen telephone, at eye level. They were meant to remind my mother that whenever she felt unsteady, whenever the old anxiety feeling came back, she should sit down, close her eyes, and—

And what? What was this process by which the beast was to be neutralized? What alternate states of consciousness or bodily contortions did it require? I had never before asked, and when my mother had tried to tell me I hadn’t listened. I listened now, and I was incredulous, for the change in breathing my mother preached was, when you got down to it, minuscule.

“Of course there is. I’ve been there. It’s a college campus.

There are tons of places to sit.”

“No, there aren’t. The place is overrun. There are people everywhere. It’s an infestation!”

“But there are loads of people in the library! That’s where they keep the computers.”

“Then try another floor. Go to the basement.”

I did as she said. In the periodicals room I found a wool-knit lounge chair with a heavy wooden frame and heaved it in front of a window overlooking a copse of trees at the base of a steep hill.

I did as she said. I laid my right hand on my stomach, closed my eyes, and breathed. I felt my belly rise and fall. In through the nose, four, out through the mouth, six. In through the nose, four, out through the mouth, six… At first, nothing happened. It was difficult even to sit still, let alone to focus on the numbers. I almost stood and bolted for the stairs. Then, gradually, I felt it working. Somewhere within me things shifted. My blood chemistry recalibrated. Ions flipped their charge. Molecules realigned. The organism settled. Behind my eyelids the dark was now a dampening dark rather than the dark of terrifying space. I felt, as I opened my eyes to the bending trees, as I imagined I was meant to feel. I felt lucid.

My mother is far from the only therapist to tout the powers of the breath. Anxious people breathe too quickly, and from the upper parts of the lungs, increasing the heart rate and throwing off pH balance and resulting in all sorts of unpleasant physiological changes. Learning to breathe slowly and more deeply is sound advice. “Once a client of mine can control his breathing patterns in a variety of situations, I believe he is 50 percent along on the road to success,” writes one anxiety specialist. “For some people, identifying and mastering breathing patterns will completely end their symptoms and resolve their problems.”

Unfortunately, this has not been the case for me. Breathing techniques have helped, but they haven’t been able to resolve the problem—probably because my anxiety is so cerebral. For true change, I require higher-order instruction. Whatever help breathing did bring, meanwhile, it didn’t bring for years, until I was ready to put in the time needed to change my habits. 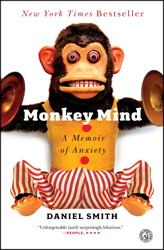 Monkey Mind: A Memoir of Anxiety
by Daniel Smith

Monkey Mind is the stunning articulation of what it is like to live with anxiety. As he travels through anxiety’s demonic layers, Smith defangs the disorder with great humor and evocatively expresses its self-destructive absurdities and painful internal coherence.