Yoga and Meditation both have so many benefits for your health and mind. Many people turn to drugs as a means to calm themselves down and create peace in their minds. However, yoga and meditation can create the same stress-relieving sensation. Lloyd Sederer, author of THE ADDICTION SOLUTION shares his advice on how these fitness, breathing, and mindfulness techniques can be alternatives to addiction.

Eastern yogis and gurus have for millennia employed various forms of meditation and breathing techniques to achieve inner states of calm and peace and to remarkably alter their autonomic (fight-or-flight) nervous system. Dramatic reductions in heart rate, temperature, and respiration have been achieved by some mystics and probably by Houdini as well, since he was able to survive being locked up underwater for lengthy periods (how he unlocked the chains is beyond me).

Meditation and yogic breathing—a form of slow breathing, five to six breaths a minute with gentle resistance on exhalation— can enable us to regulate bodily functions previously thought inaccessible to our conscious efforts and also have a profound effect on the mind’s executive functions (e.g., focus, sustained concentration, short-term memory, and sequencing of actions) and our capacity for awareness of ourselves and others.

We possess, by virtue of human consciousness, the capacity to know we exist and to hold a sense of self, of identity, of personhood. Humans are self-aware. But awareness is limited and can grow dimmer with the passage of time and the blinders of everyday existence. The desire to both expand awareness and, paradoxically, lose the sense of self to a more universal experience is particularly sought after by adolescents and young adults.

Psychoactive drugs can be quick and efficient ways to alter consciousness. Meditation is another means, though it takes effort—effort until it becomes effortless. Many schools of meditation exist. Some rely on a mantra, others on breathing rhythms and focus, still others on observing the mind and breath and a relationship with a teacher, as does Zen. Often meditation is coupled with a yoga practice.

Transcendental Meditation was popularized in the United States many decades ago. I learned Transcendental Meditation while in medical school and used it on and off until I began to practice yogic breathing some years ago. Once, while volunteering for a study on brain-wave activity while in medical school, I had my electroencephalograph, or EEG, readings taken while practicing Transcendental Meditation. I was delighted to learn that, compared to my normal EEG reading, my alpha waves—a type of brain waves produced during peaceful relaxation, possibly playing a role in effective brain-circuit activities—were particularly prominent during my meditation.

Many meditation centers, experts, and even online services teach meditation. It is highly accessible, affordable, and generally readily learned. But as with exercise, repetition with meditation is the road to its nirvana. Changing our consciousness, which can get stuck in familiar patterns from the endless repetition of existing, takes some doing. But it has been done for thousands of years. Meditation, yoga, and breathing techniques are psychoactive substance alternatives that are safe and, over time, effective in supplying the human appetite with experiences beyond the everyday, the mundane, and the dysphoric.

Find out the benefits that Yoga and Meditation can have on your health in THE ADDICTION SOLUTION by LLoyd Sederer!

To get your yoga and meditation routines going, watch….

Excerpted from THE ADDICTION SOLUTION by LLoyd Sederer. Copyright © 2019 by the author. Used by permission of the publisher. All rights reserved.

Photo by Form Fitness on Unsplash. 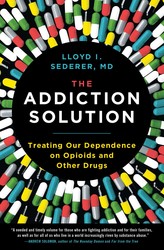 The Addiction Solution
by Lloyd Sederer

Written with warmth, accessibility, and vast authority, The Addiction Solution is a practical guide through the world of drug use and abuse and addiction treatment. Here, Lloyd I. Sederer, MD, brings together scientific and clinical knowledge, policy suggestions, and case studies to describe our current drug crisis and establish a clear path forward to recovery and health. In a time when so many people are affected by the addiction epidemic, when 142 people die of overdoses every day in the United States, principally from opioids, Sederer’s decades of wisdom and clinical experience are needed more than ever before.

With a timely focus on opioids, Sederer takes us through the proven essentials of addiction treatment and explains why so many of our current policies, like the lingering remnants of the War on Drugs, fail to help drug users, their families, and their wider communities. He identifies a key insight, often overlooked in popular and professional writing about addiction and its treatment: namely, that people who use drugs do so to meet specific needs, and that drugs may be the best solution those people currently have.