For most of us life is one long story. Everyone has one. If you think about it, each day is like a page that we add to the book of our existence. I’m fascinated with this concept and I’m also very mindful of my own fate. I know my story could end at any minute. My motto of living every day like it’s my last isn’t due to my obsession with the apocalypse. It stems from a brush with death I experienced years ago. That single day inspired me to follow the dream of writing a book (I’ve penned Orbs and Orbs II) and becoming an Ironman triathlete. Honestly, I’m not sure if I would be where I am today if I hadn’t almost died, everything seems to lead directly back to that chilly winter night in 2007.

I’ll start with the most terrifying moment—the moment I realize I was really being rolled into emergency surgery for a suspected heart attack. I grabbed my dad’s hand and told him to tell my family I loved them and to take care of my dog if I didn’t make it.

I supposed I should backtrack a bit. That was kind of dramatic. A few hours earlier I awoke with the worst pain I’ve ever experienced emanating inside my chest. Every breath, every beat sent a shock wave of pain through my body. After a quick call to my parents my dad rushed over to my house. As I was waiting on the stoop, hyperventilating, I focused on a blur of movement across the street. There were two deer, a buck and a doe, and they were both staring at me. The view was captivating, and surreal. At first I thought I was dreaming.

I wasn’t. Two hours later the emergency room doctor announced to my parents I was having a heart attack. They wheeled me into surgery then I grabbed my dad’s hand and said (see above).

When I next awoke I was in the ICU. I hadn’t had a heart attack, but I did have a serious heart condition called Pericarditis, which affects the outer sack or lining of the heart. It’s extremely painful and in some cases, deadly. After suffering severe damage to my heart the doctor’s told me I might never recover fully. And after enduring test after test to determine the extent of the damage they also discovered something else. I was diagnosed with another heart syndrome called Wolff-Parkinson-White. In short my heart has an abnormal accessory electrical conduction pathway. That’s a mouthful, and it means I sometimes experience palpitations and in rare cases, dizziness.

Fast forward 6 years and I was on hour 12 of an Ironman Triathlon. I wasn’t dreaming. This was real! The doctor’s had told me I would never ever be a triathlete, that I would never cross that finish line. And here I was, just 5 miles away on the marathon leg of the triathlon. The moment I blew through that finish was one of the most amazing moments in my life.

What happened in the 7-year gap between my stay in the ICU and my Ironman finish? Sometimes I don’t even know.

What I think happened is this: My brush with death inspired me to reach for several of my dreams. I started writing a story that ended up becoming my debut novel, The Biomass Revolution. I self-published the book in 2013 almost 7 years after I started. It’s not the greatest literary debut, but it lit the fire. And that fire is burning damn strong today.

I also started running again. I’d always loved long distance running and biking. In a couple years I was chasing down my first triathlon finish line. And then the same year I self-published Biomass I decided to go to the distance. I signed up for an Ironman, known as the holy grail of triathlons. For my fellow nerds the Ironman has nothing to do with the comic book character of Tony Stark. Although I’m sure he could complete one, if he was real.

I digress. The race consists of a 2.4 mile swim, 112 mile bike, and is topped off by a full marathon at the end. Training can take 6 months to 1 year, depending on the person. Some people never finish, some people even die.

I wasn’t sure if I could complete the race. Some days I would find myself struggling to get through a long run or bike and others I found myself wondering if my heart was just going to give out on me. BOOM. All over. My morbid side started picturing myself collapsing to the ground and dying on some empty trail in the middle of nowhere.

But I never stopped. I never gave up because I couldn’t. I had to cross that finish line and I had to finish writing my books. A few months into training and I started passing the hours by losing myself in the stories I’ve kept in my mind for years. It was on a long swim that the idea of my novel, Orbs evolved into a full concept. I started writing the book after training sessions. My life became a routine. I’d go to work at the state, come home, load up my bike or go for a run and then write with eyes glazed over. My girlfriend wasn’t happy and I didn’t blame her. I was lucky she supported me and motivated me to continue when I didn’t think I could.

Six months after starting Ironman training I was on a plane to Coeur D’Alene, Idaho. I spent several days exploring the mountains and preparing myself mentally for the race. And at night I continued writing.

On a crisp summer day in 2013 I crossed the finish line of my first Ironman triathlon. Four months later, I published Orbs. I reached my dreams. And I didn’t die.

It was during the triathlon training that I believe I truly discovered my writing voice. I spent a lot of time by myself in those months, lost in my thoughts. I lost track of how many miles I swam, ran and biked, but I’ll never forget the 88,000 words that came together to form Orbs.

After sharing my journey, I’d like to thank you for reading and leave you with a piece of advice. It took a life-threatening illness for me to really chase my dreams, but that doesn’t need to be your story. The greatest thing about life is that you have some control over what the pages say in the book of your life. Don’t wait for something to knock you down before you start filling those pages with amazing material—don’t wait to chase your dreams. They may be closer than you think. 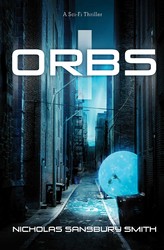 The first thrilling story of horror, adventure, and survival during the alien invasion in Nicholas Sansbury Smith’s bestselling Orbs series has been completely remastered and re-edited since its original publication and now features a sneak peak at Orbs II !At the end of the world, who will survive? The year is 2061, and the planet is dying. The human race is headed to Mars. Dr. Sophie Winston is hired by New Tech Corporation to test a biosphere deep within the heart of Cheyenne Mountain; a mission she believes will help prepare NTC for the three-year flight to the red planet. But, just days into the assignment, things start to go wrong. Humans are gone, vanished without a trace, and they aren't the only thing missing. The planet's water is gone, too. As the team explores their surroundings, they find thousands of luminous blue orbs lining the streets. It isn't until they uncover what's inside that they realize the nightmare that lies ahead.