Taking the best care of a man’s health begins with the basic understanding that the prostate is a little gland with the potential for big trouble. The prostate, not “prostrate” as so many men misname it, is the walnut-sized organ located at the base of the bladder that supplies some of the fluids in semen that supports the sperm. The size of a pea at birth, the prostate reaches its normal size by age 20. That’s when problems can often begin. From The Whole Life Prostate Book.

For unknown reasons, the prostate is prone to the development of a disproportionate number of diseases that can affect a man’s health—and greatly increase the possibility of erection problems. These include non-cancerous enlargement of the gland and a variety of bothersome urination symptoms that come from that; inflammation within the prostate and nearby pelvic floor muscles; infection; and prostate cancer, which typically scares—and harms—men the most. The good news is that adopting a healthy lifestyle can decrease the risk of all these ailments.

Prostate Cancer 101
A diagnosis of prostate cancer is unfortunately a common experience among many older men. Cancer of the prostate is the most common cancer in American men, and, following lung cancer, it’s the major cause of cancer death. The lifetime risk for this cancer is one out of every six American men, with one of 30 dying from the disease. The likelihood of developing prostate cancer increases with age.

For unknown reasons, the death rate from prostate cancer is twice as high among African-American men, and lowest among Asians residing in Asia. According to estimates from the American Cancer Society, 242,000 new cases of prostate cancer will be diagnosed in the United States in 2012, and more than 28,000 are expected to die of the disease.

With widespread use of the PSA (prostate-specific antigen) test for diagnosing prostate cancer early, death rates have fallen 40 percent over two decades. However, there is now a major concern about diagnosing and treating so many slow-growing prostate cancers. That’s because these cancers will most likely never cause harm during a man’s lifetime, while treating them certainly will have adverse consequences on a man’s quality of life, including sexual, urinary, and bowel side effects.

Smart Use of the PSA Test
Although the prostate-specific antigen test has been disparaged for not being specific to prostate cancer—the marker also turns up in the blood due to other health conditions such as benign prostatic enlargement and infection—it is well known today that this is the best test available for assessing the risk that prostate cancer is present and its use is in large part responsible for reducing prostate cancer deaths in the United States.

PSA testing can save lives but needs to be used more effectively. For example, there should be less or no testing among the elderly, especially those with other health problems that limit life expectancy. On the other hand, there should be annual testing of those with PSA levels that suggest a higher risk of future prostate cancer, and infrequent testing—every two to four years—for those with lower PSA levels that signify a low risk of future prostate cancer.

For men who decide to be screened for prostate cancer, a baseline PSA level at age 40 followed by infrequent testing could help identify those with an aggressive cancer early in life and those more likely to develop it later in life. African-Americans and men with a first-degree relative who had prostate cancer are more likely to develop the disease early and should consider early testing.

Making the Triple Play
Men typically adopt a hands-off policy when it comes to their own health because preventive care often ranks way down on their priority lists. And they frequently pay for this head-in-the-sand attitude with reduced quality of life, sometimes even with their lives.

Too many men ignore the triple play that is associated with a longer and healthier life. Healthful food choices, reasonable portion sizes, and daily exercise have been shown to reduce the risk of chronic diseases of age, which also include prostate-related health disorders.

By consuming a diet low in animal and dairy fat, and high in a wide variety of fruits and vegetables, healthful dark grains, and nuts; not overeating; and exercising at least 30 minutes daily, men can lower their risk of developing prostate enlargement, bothersome urinary symptoms, prostate inflammation, embarrassing erectile dysfunction, and aggressive prostate cancer.

Men need to be proactive and take charge of their health. Do yourself and your loved ones a favor and make these healthful lifestyle changes. It’s the best way to reduce the chance of being diagnosed with a serious prostate or other health disorder. 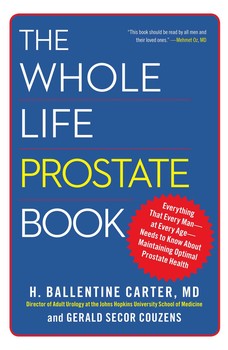 Dr. H. Ballentine Carter is the preeminent expert in the diagnosis and management of prostate disease, and in The Whole Life Prostate Book he provides men of all ages the resources to respond efficiently and effectively to a prostate crisis, as well as advice on how to prevent a crisis from ever occurring. Filled with simple and nutritious recipes, easy-to-follow workout routines, and a straightforward approach to demystifying the complex medical jargon of prostate disease, The Whole Life Prostate Book is a comprehensive and powerful guide to maintaining optimal health throughout a man’s life.