You’re wiped out, stressed, sleep-deprived, and have zero sex drive. Sound familiar? What you don’t realize is that your job, kids, or age aren’t always to blame—you may have a simple hormonal imbalance that can be fixed. Learn how I had this epiphany and how healed myself without prescriptions. From The Hormone Cure: Reclaim Balance, Sleep, Sex Drive, and Vitality Naturally with the Gottfried Protocol.

When I was in my thirties, I worked at a Health Maintenance Organization (HMO) and was preparing to launch an integrative medical practice. My busy husband traveled frequently (he is a green visionary who founded the U.S. and World Green Building Councils). I had two young kids and a mortgage to pay. As if this weren’t stressful enough, monthly PMS made my life miserable. In the week before my period, I had night sweats that disrupted my sleep. My heavy, painful periods came every twenty-two to twenty-three days—and when you combine that with PMS, I had only one good week per month. Throughout the month, I suffered from low energy, a nonexistent libido, and a less-than-sunny attitude. As you might imagine, this was a truly terrible experience, and my entire family suffered.

I was too young to feel so bad. Antidepressants didn’t seem like the right solution. I didn’t want to dampen my dynamic range or mute the texture of my life. I just wanted to feel more alive and charged.

I was lucky. Because of my medical training, I knew what to do. I formed a hypothesis: my hormones were off balance. In med school, I was taught that measuring hormone levels is a waste of time and money, because hormone levels vary too much. But when I thought about how we track hormones such as estrogen, progesterone, thyroid, and testosterone when women are trying to conceive or are in the early months of pregnancy, I wondered why those numbers would be important indications of a woman’s health in one situation but not another? Wouldn’t my hormone levels be as reliable an indicator of my health after my pregnancies as before them?

So I drew some blood and tested my blood-serum levels of thyroid, sex hormones including estrogen and progesterone, and cortisol, the main stress hormone. And I discovered what millions of other women face: my hormones were seriously off kilter. I was a frazzled new mom, harried wife, and busy doctor, with significant imbalances in my estrogen, progesterone, thyroid, and cortisol levels.

Despite the lack of nutrition and lifestyle education in the hallowed halls of Preparation H (our nickname for Harvard Medical School), I did learn how to approach a problem systematically. I was taught how to assess evidence and to distrust dogma. But rather than masking the symptoms of my hormone issues, as I had been taught to do (usually with a birth control pill or antidepressant), I wanted to seek the root causes. I sought to uncover what was wrong, as well as why things went sideways for me hormonally. As I struggled with PMS, habitual stress, attention problems, disordered eating, and accelerated aging, I slowly developed a progressive, step-by-step, lifestyle-driven approach to treat my hormone imbalance naturally—that is, without prescription drugs.

Eventually, I got religious about fish oil, vitamin D, and important precursors to hormones and neurotransmitters (including amino acids such as 5-HTP, a precursor to serotonin, one of the “feel-good” neurotransmitters, or brain chemicals). For the first time in my life, I faithfully practiced what I preached: I ate seven to nine servings of fresh fruits and vegetables per day. I stopped exercising so hard, in an obsessive attempt to burn calories, and exercised smarter. I began meditating regularly. My weight dropped 25 pounds. I was happier. I didn’t yell at the kids so much. I could find my keys. My energy improved greatly. I was even more open to sex. I knew that I was on to something. 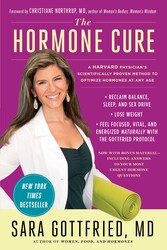