Sick and tired of migraine meds that leave you drowsy and too many doses of over-the-counter cures? Since the Excedrin recall has many of us migraine sufferers scrambling for alternatives, it’s time to explore other options. These natural products have shown impressive results in the treatment of migraine headaches, according to Michael T. Murray, N.D., author of What the Drug Companies Won’t Tell You and Your Doctor Doesn’t Know.

Riboflavin. One of the theories used to explain a migraine headache is that it is caused by reduced energy production within the mitochondria, units of cells of blood vessels in the head. Therefore, because vitamin B2 (riboflavin) can potentially increase cellular energy production, it was thought that this vitamin might prevent migraine. In one double-blind study with riboflavin—400 milligrams (mg) daily—the proportion of patients who improved by at least 50 percent was 15 percent for a placebo and 59 percent for riboflavin. There were no side effects attributed to the riboflavin therapy. It is notable that riboflavin is as nearly as effective as drugs for migraines, but is much safer and relatively cheap.

Magnesium. An insufficiency of magnesium may also play a significant role in many headaches. Several researchers have demonstrated substantial links between low magnesium levels and both migraine and tension headaches. A magnesium deficiency is known to set the stage for the events that can cause a migraine attack or a tension headache. Low brain, tissue, and cellular concentrations of magnesium have been found in patients with migraines, indicating a need for supplementation, since a key function of magnesium is to maintain the tone of the blood vessels and prevent overexcitability of nerve cells. Magnesium supplementation can be quite effective in preventing migraine headaches. The recommended dosage is 150 to 250 mg three times daily. Magnesium bound to citrate, malate, or aspartate is better absorbed and better tolerated than inorganic forms such as magnesium sulfate, hydroxide, or oxide, which tend to have a laxative effect. An increased intake of high-magnesium foods such as nuts, tofu, and green leafy vegetables also makes a lot of sense.

Petadolex®. This standardized extract from the butterbur plant (Petasites hybridus) has been shown in several double-blind studies to produce excellent results as a treatment for migraine headaches, without side effects. In one study, 60 patients with headaches randomly received either 50 mg of Petadolex twice daily for 12 weeks, or a placebo. Petadolex reduced the frequency of attacks by 46 percent after four weeks, 60 percent after eight weeks, and 50 percentafter 12 weeks of treatment. (The results for the placebo group were: 24 percent, 17 percent, and and 10 percent, respectively.) Petadolex is generally well tolerated, but diarrhea has been reported in some individuals. If this side effect occurs, discontinue use. Its safety during pregnancy and lactation has not been determined. The typical adult dosage ranges from 50 to 100 mg twice daily with meals.

What other tips can help make you feel your best? Great breakfast menus to fuel your workouts, healthy lifestyle advice from bestselling authors, and fitness trends are at your fingertips in the new Tips on Healthy Living newsletter. 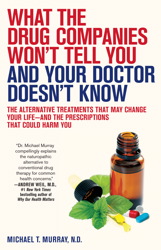 What the Drug Companies Won’t Tell You and Your Doctor Doesn’t Know
by Michael T. Murray

Adverse reactions to over-the-counter and prescription drugs are currently estimated to kill more than 100,000 Americans a year (making this the fourth leading cause of death in the United States behind cancer, heart disease, and stroke). Drawing on more than twenty years of scientific research, Dr. Michael T. Murray reveals how the pharmaceutical treatments of the most common diseases that plague our society are often ineffective and result in serious, widespread side effects—and then explains how natural treatments can help us avoid them. What the Drug Companies Won’t Tell You and Your Doctor Doesn’t Know makes clear that we must radically reevaluate the way that we take care of ourselves, and Dr. Murray provides clear guidance on the steps necessary to help you lead a fitter, happier, and healthier life.