You think you’re making healthy choices by buying products approved by the American Heart Association. But unhealthy processed meats have “earned” the AHA’s heart-check nutrition mark, as has a sugary drink called Chocolate Moose Attack. Why? Because food companies pay for endorsements by the AHA, a nonprofit, says Barbara H. Roberts, MD in her book The Truth About Statins: Risks and Alternatives to Cholesterol-Lowering Drugs.

The AHA is a nonprofit organization with a mission to “build healthier lives free of cardiovascular disease and stroke.” It actively solicits donations from individuals and companies, and reports assets of almost $1 billion.

Integrity in Science (ISS), a project of the organization Center for Science in the Public Interest (CSPI), reviews studies and other scientific literature for conflicts of interest between researchers and industry. As detailed on its website, “For the fiscal years from 03–04 to 06–07, AHA reports receiving $30,158,173 from pharmaceutical and medical device companies.” Thirty million dollars can buy a lot of influence.

Contributions from industry help to support lavish salaries for AHA executives. In 2008 the AHA paid CEO M. Cass Wheeler a whopping $1,089,331 in salary and an additional $53,238 from the AHA and “related organizations”—for a thirty-eight-hour workweek. This is many multiples of what your average primary care doctor earns working sixty hours a week. With this kind of money at stake, the AHA is unlikely to espouse positions that would compromise Big Pharma profits.

The AHA also rakes in millions of dollars each year from other corporate sources: namely, food companies, which pay big bucks to gain the “heart-check mark” imprimatur from the AHA. The foods so anointed have to be low in fat, saturated fat, and cholesterol. The Integrity in Science website notes that the AHA charges anywhere from $5,490 to $7,500 per product in the first year to give permission to add the heart-check mark to a product’s label. There are hefty renewal fees each year.

What are some of these supposedly heart-healthy foods? Would you believe a whole list of processed meats, including Boar’s Head All Natural Ham (340 milligrams of sodium in a 2-ounce serving) and Boar’s Head EverRoast Oven Roasted Chicken Breast (440 milligrams of sodium in a 2-ounce serving)? In order to be classified as “low sodium,” according to FDA guidelines, a food has to contain 140 milligrams of sodium or less, but apparently the AHA is not interested in the salt content of the food it endorses. This, despite the fact that a high sodium intake raises blood pressure, thus increasing the risk of ASCVD. And you have to wonder if these meats are from animals who were pumped full of hormones and antibiotics to accelerate their growth and maximize profits for the large conglomerates that have taken over most food production in the United States.

Not only is processed meat high in sodium, but there is excellent evidence that eating even just one serving a day increases the risk of diabetes as well as heart disease. In a review of almost 1,600 studies that included more than one million people in ten countries on four continents, the authors of a recent meta-analysis showed that a 1.8-ounce daily serving of processed meat raised the risk of diabetes by 19 percent and of heart disease by 42 percent. The list of supposedly heart-healthy foods also includes lots of “reduced” fat or “lean” ground beef. But the leanest ground beef still contains 4 percent saturated fat, which is way too much, especially given the supersized portions many people consume.

But drugs, medical devices, and foods are not the only potential sources of income that the American Heart Association has tapped. In May 2010 the AHA was taken to task in the media for endorsing Nintendo’s Wii gaming system. As reported by MedPage Today in an article entitled “Is Wii Worthy of an AHA Endorsement?,” Nintendo paid the AHA $1.5 million over three years for an “exclusive relationship.” In an interview, Dr. Clyde Yancy, president of the AHA, defended the endorsement, despite doubts about the amount of exercise that Wii users will actually achieve. The article quotes Janet Fulton, an epidemiologist at the US Centers for Disease Control and Prevention (CDC): “The amount of activity one achieves from this active gaming is really inconclusive in terms of its benefit on health.”

In the same article, Dr. Yancy was asked about another product that carries the AHA heart-check mark: a drink called Chocolate Moose Attack. The interviewer pointed out that this beverage contains more sugar per ounce than regular Pepsi. Dr. Yancy defended the AHA’s decision by saying that “the totality of the product is what we have to evaluate. Low fat, low sodium. We have to look at the entirety of the package.”

How can the AHA’s recommendations about diet, not to mention drugs, be trusted when the organization is so beholden to Big Pharma and giant food corporations? Simply put, they can’t be. These recommendations were bought and paid for, and we consumers are the losers. 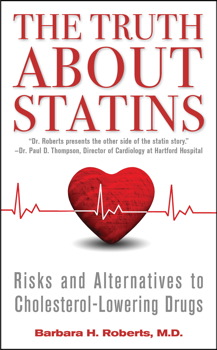 The Truth About Statins: Risks and Alternatives to Cholesterol-Lowering Drugs
by Barbara H. Roberts

COULD STATIN DRUGS ACTUALLY HARM YOU?

Despite the rosy picture painted in the ads of a miracle cure for high cholesterol and its attendant heart disease, the reality of taking statins may be far less pretty. Dr. Barbara H. Roberts, director of the Women’s Cardiac Center at the Miriam Hospital in Rhode Island, discusses both the benefits and health risks of these popular drugs in this comprehensive guide that finally reveals the questionable science behind the research studies. This honest, patient-friendly appraisal of the most widely used medications in the world may shock you, but it may also save your life.