Women are often taught to suppress their frustration. This can create a lot of pent up emotions for anyone! Rebecca Traister, author of GOOD AND MAD, wants you to do the opposite by expressing your inner rage to help better your own life.

I confess that I am now suspicious of nearly every attempt to code anger as unhealthy, no matter how well meaning or persuasive the source. I believe that Stanton was correct: what is bad for women, when it comes to anger, are the messages that cause us to bottle it up, let it fester, keep it silent, feel shame and isolation for ever having felt it or rechannel it in inappropriate directions. What is good for us is opening our mouths and letting it out, permitting ourselves to feel it and say it and think it and act on it and integrate it into our lives, just as we integrate joy and sadness and worry and optimism.

I had been given a gift: the opportunity—the incentive—to explore the dimensions and be curious about and respectful of my own anger, as well as the rage of other women. It felt great. I felt great. In getting to voice and appreciate fury, I had found relief, release, inspiration, and exhilaration

But I was also aware that my experience was unusual, that it could not be converted into advice that might apply to others. So while sure, I urge those who can comfortably do so to scream, yell, curse, write it out, phone a friend, and not keep themselves from feeling their own anger, you will find here no exhortation to lean into your own rage as I have into mine. I was not paying any price for expressing my ire, in fact I was being paid for it; it was my work, my job to take women’s anger seriously. My editors, bosses, friends were taking this project, and therefore the fury it was unpacking, seriously. It was glorious. But it was not replicable.

To suggest to other women that they should simply let it out, channel their fury and scream it to the world, would be to repeat a long history of well-intentioned, idealistic, but ultimately impractical approaches to feminist strategy: the urging of individual women to work around or within the systems that have not been built to accommodate or even acknowledge them. I can’t tell women to express their anger as I have and not acknowledge that in the real world, this rage might get them fired, denied raises and promotions, incur punishments and violence. We live in a world in which a black woman, angry at being pulled over for no reason, risks arrest, and a woman angry at being unjustly arrested risks death; in which young women are shot, or run down by cars, because they—or because another woman—have rejected the advances of a man

Having had the rare and privileged experience of having had my anger taken seriously, valued on its merits, I no longer believe that it is anger that is hurting us, but rather the system that penalizes us for expressing it, that doesn’t respect or hear it, that isn’t curious about it, that mocks or ignores it. That’s what’s making us sick; that’s what’s making us feel crazy, alone; that’s why we’re grinding our teeth at night.

And so it is not women (or not only women) who must change our behaviors; it’s the system built to suppress our ire, and thus our power, by design. We can change it by protesting and marching and calling and sending postcards; by donating money and knocking on doors for candidates and running for office, and making demands of our government and in our workplaces, on behalf of ourselves and, crucially, alongside and on behalf of those with more reason to be furious and less ability to leverage that fury than we have.

To learn more about expressing your rage pick up a copy of GOOD AND MAD by Rebecca Traister!

For more on Tips of Life & Love: Be Brave Enough to Stop Pleasing People

Excerpted from Good and Mad by Rebecca Traister. Copyright © 2018 by author. Used by permission of the publisher. All rights reserved.

Photo by Timothy Eberly on Unsplash 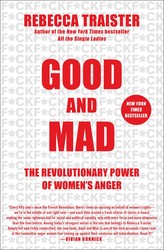 Good and Mad
by Rebecca Traister

“In a year when issues of gender and sexuality dominated the national conversation, no one shaped that exchange more than Rebecca Traister. Her wise and provocative columns helped make sense of a cultural transformation.”—National Magazine Award Citation, 2018 “The most brilliant voice on feminism in this country.”—Anne Lamott, author of Bird by Bird From Rebecca Traister, the New York Times bestselling author of All the Single Ladies comes a vital, incisive exploration into the transformative power of female anger and its ability to transcend into a political movement. In the year 2018, it seems as if women’s anger has suddenly erupted into the public conversation. But long before Pantsuit Nation, before the Women’s March, and before the #MeToo movement, women’s anger was not only politically catalytic—but politically problematic. The story of female fury and its cultural significance demonstrates the long history of bitter resentment that has enshrouded women’s slow rise to political power in America, as well as the ways that anger is received when it comes from women as opposed to when it comes from men. With eloquence and fervor, Rebecca tracks the history of female anger as political fuel—from suffragettes marching on the White House to office workers vacating their buildings after Clarence Thomas was confirmed to the Supreme Court. Here Traister explores women’s anger at both men and other women; anger between ideological allies and foes; the varied ways anger is perceived based on its owner; as well as the history of caricaturing and delegitimizing female anger; and the way women’s collective fury has become transformative political fuel—as is most certainly occurring today. She deconstructs society’s (and the media’s) condemnation of female emotion (notably, rage) and the impact of their resulting repercussions. Highlighting a double standard perpetuated against women by all sexes, and its disastrous, stultifying effect, Traister’s latest is timely and crucial. It offers a glimpse into the galvanizing force of women’s collective anger, which, when harnessed, can change history.