A Cesarean section delivery is major abdominal surgery, involving risks to the baby and mother even when performed under optimal conditions. But there’s a reason why the number of U.S. surgical births rises sharply before long weekends and holidays, explains author Jennifer Margulis in The Business of Baby.

Though most American doctors aren’t consciously trying to inflict Cesareans on their patients, the sad truth is that an untold number of Cesarean sections are performed mostly—if not entirely—for the convenience of the doctors. Normal vaginal childbirth is often a long, drawn-out affair. The average time for labor in a first-time mother is from less than an hour to significantly more than twenty. It’s not uncommon (or unsafe if the baby and the mom are both tolerating labor) for a woman to be in labor for several days. As long as the baby is tolerating the labor, which can be monitored by checking the baby’s heart rate once every fifteen minutes, and the mom is not exhausted, a protracted labor is not an indication for Cesarean birth. There is no way to predict how fast or how slow a woman will give birth or what time of day her child will be born. Gestating human infants are born when they are ready. They flout the convenience of the doctors, labor and delivery nurses, and their own parents. For an eager-eyed young couple the unpredictability of childbirth is a good initiation into parenting and an early lesson in how infants tend to do things on their own schedule. But for an overworked obstetrician who has young children at home to tuck into bed, meetings to attend, or weekend plans, the inability to control when a laboring woman will give birth becomes a source of stress. A planned Cesarean section or induction, on the other hand, is entirely controllable.

Rebecca Zavala’s doctor pressured her to induce labor a week before her due date, telling her the baby’s head seemed large. The doctor also told Rebecca she was leaving soon on vacation. The doctor didn’t mention that induced labor is much more likely to end in Cesarean birth, or that once you have one Cesarean in much of southern California it is virtually impossible to have a vaginal birth, since the majority of hospitals in Ventura County and Los Angeles either have written or unwritten policies (called de facto bans, where no doctor on staff will agree to attend a VBAC) against allowing women to try for a VBAC. After just four hours of labor at the Santa Monica-U.C.L.A. Medical Center, the doctor broke Rebecca’s waters and increased labor-stimulating hormones. Then she told Rebecca that the baby was “showing signs of distress.” Rebecca agreed to the “emergency” C-section without question. The nurses congratulated her on being a compliant patient.

Laboring women report being rushed into “emergency” C-sections before shift change at the hospital, and researchers have long remarked that the number of surgical births rises sharply before long weekends, holidays, and school vacations. As much as obstetricians deny that C-sections are done for reasons of convenience, government statistics that analyze when babies are born tell the story in black-and-white: In the past twenty years the timing of births in America has shifted dramatically. Today, according to the Centers for Disease Control, the vast majority of American babies are born Monday through Friday, with a much smaller number born on the weekends.

Stuart Fischbein, the doctor I interviewed via Skype, who has been practicing obstetrics in the Los Angeles area for more than thirty years and is one of the rare doctors who will, under the right circumstances, deliver twins and breech babies vaginally, believes that doctor convenience is one of the main reasons for the runaway rise in C-section rates. “If I do a breech I have to sit with a patient for six to ten hours because hospital policy says I have to be there,” Fischbein explains. “I can read a book and watch Sports Center in the lounge. But I can’t be making any money or covering the overhead I need to run my office or spending time with my family. Who’s going to do that when they can do a C-section and be out in forty-five minutes? It’s more expedient for doctors to do C-sections. It’s just so much easier for them.” 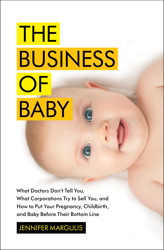 Business of Baby
by Jennifer Margulis

Why, despite our state-of-the-art medical technology, does the United States have among the highest maternal and infant mortality rates in the industrialized world? Why do pregnant women who are planning to breastfeed receive “free” samples of infant formula from American obstetricians? Why are American newborns given a vaccine at birth against hepatitis B, a sexually transmitted disease? The Business of Baby, an eye-opening work of investigative journalism, exposes how our current cultural practices during pregnancy, childbirth, and the first year of a baby’s life are not based on the best evidence or the most modern science, revealing how American moms and their babies are being undermined by corporate interests. An illuminating combination of meticulous research and in-depth interviews with parents, doctors, midwives, nurses, health care administrators, and scientists, Margulis’s impassioned and eloquent critique is shocking, groundbreaking, and revelatory. The Business of Baby arms parents with the information they need to make informed decisions about their own health and the health of their infants.