Today, more than 75 percent of self-identified Democrats and liberals believe humans are changing the climate, yet Republicans have overwhelmingly chosen to reject the scientific consensus. In some regions, only about 20 percent accept the science. In my book, This Changes Everything: Capitalism vs. the Climate, I examine how experts explain this political rift.

It seems hard to believe today, but as recently as 2008, tackling climate change still had a veneer of bipartisan support, even in the United States. That year, Republican stalwart Newt Gingrich did a TV spot with Democratic congresswoman Nancy Pelosi, then Speaker of the House, in which they pledged to join forces and fight climate change together. And in 2007, Rupert Murdoch—whose Fox News channel relentlessly amplifies the climate change denial movement—launched an incentive program at Fox to encourage employees to buy hybrid cars (Murdoch announced he had purchased one himself).

Those days of bipartisanship are decidedly over. Today, more than 75 percent of self-identified Democrats and liberals believe humans are changing the climate—a level that, despite yearly fluctuations, has risen only slightly since 2001. In sharp contrast, Republicans have overwhelmingly chosen to reject the scientific consensus. In some regions, only about 20 percent of self-identified Republicans accept the science. This political rift can also be found in Canada. According to an October 2013 poll conducted by Environics, only 41 percent of respondents who identify with the ruling Conservative Party believe that climate change is real and human-caused, while 76 percent of supporters of the left-leaning New Democratic Party and 69 percent of supporters of the centrist Liberal Party believe it is real. And the same phenomenon has once again been documented in Australia and the U.K., as well as Western Europe.

Ever since this political divide opened up over climate change, a great deal of social science research has been devoted to pinpointing precisely how and why political beliefs are shaping attitudes toward global warming. According to Yale’s Cultural Cognition Project, for example, one’s “cultural worldview”—that would be political leanings or ideological outlook to the rest of us—explains “individuals’ beliefs about global warming more powerfully than any other individual characteristic.”16 More powerfully, that is, than age, ethnicity, education, or party affiliation.

The Yale researchers explain that people with strong “egalitarian” and “communitarian” worldviews (marked by an inclination toward collective action and social justice, concern about inequality, and suspicion of corporate power) overwhelmingly accept the scientific consensus on climate change. Conversely, those with strong “hierarchical” and “individualistic” worldviews (marked by opposition to government assistance for the poor and minorities, strong support for industry, and a belief that we all pretty much get what we deserve) overwhelmingly reject the scientific consensus.

Yale law professor Dan Kahan, the lead author on this study, attributes the tight correlation between “worldview” and acceptance of climate science to “cultural cognition,” the process by which all of us—regardless of political leanings—filter new information in ways that will protect our “preferred vision of the good society.” If new information seems to confirm that vision, we welcome it and integrate it easily. If it poses a threat to our belief system, then our brain immediately gets to work producing intellectual antibodies designed to repel the unwelcome invasion.

As Kahan explained in Nature, “People find it disconcerting to believe that behavior that they find noble is nevertheless detrimental to society, and behavior that they find base is beneficial to it. Because accepting such a claim could drive a wedge between them and their peers, they have a strong emotional predisposition to reject it.” In other words, it is always easier to deny reality than to allow our worldview to be shattered, a fact that was as true of die-hard Stalinists at the height of the purges as it is of libertarian climate change deniers today. Furthermore, leftists are equally capable of denying inconvenient scientific evidence. If conservatives are inherent system justifiers, and therefore bridle before facts that call the dominant economic system into question, then most leftists are inherent system questioners, and therefore prone to skepticism about facts that come from corporations and government. This can lapse into the kind of fact resistance we see among those who are convinced that multinational drug companies have covered up the link between childhood vaccines and autism. No matter what evidence is marshaled to disprove their theories, it doesn’t matter to these crusaders—it’s just the system covering up for itself. 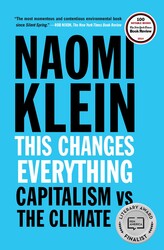 The most important book yet from the author of the international bestseller The Shock Doctrine, a brilliant explanation of why the climate crisis challenges us to abandon the core “free market” ideology of our time, restructure the global economy, and remake our political systems.In short, either we embrace radical change ourselves or radical changes will be visited upon our physical world.