Mega-tragedies like Superstorm Sandy, which cause loss of life and billions in damages, drive an argument for radical changes that address the root, rather than the symptoms, of our climate crisis. With the right kind of public pressure, money can be spent reviving and reinventing communities hit by disasters. One example: Greensburg, Kansas, after a super tornado destroyed 95 percent of the town in 2007. From This Changes Everything: Capitalism vs. the Climate.

As a result of an extraordinary, community-led process that began just days after the disaster, with neighbors holding meetings in tents amid the wreckage of their former lives, Greensburg today stands as a model “green town,” often described as the greenest in America. The hospital, city hall, and school have all been built to the highest certification level issued by Leadership in Energy and Environmental Design (LEED). And the town has become a destination for hundreds of policy makers, anxious to learn more about its low-energy lighting and its cutting-edge green architecture and waste reduction, as well as the wind turbines that earn municipal revenue by producing more power than local residents need.

Most striking of all, this “living laboratory” is taking place in the heart of an overwhelmingly Republican-voting county, where a great many people are entirely unconvinced that climate change is real. But those debates seem to matter little to residents: the shared experience of tremendous loss, as well as the outpouring of generosity that follow the disaster, have, in Greensburg, rekindled the values of land stewardship and intergenerational responsibility that have deep roots in rural life. “The number one topic at those tent meetings was talking about who we are—what are our values?” recalls Greensburg mayor Bob Dixson, a former postmaster who comes from a long line of farmers. He added, “Sometimes we agreed to disagree, but we were still civil to each other. And let’s not forget that our ancestors were stewards of the land. My ancestors lived in the original green homes: sod houses…. We learned that the only true green and sustainable things in life are how we treat each other.”

Images by Joah Bussert for GreensburgGreentown.org 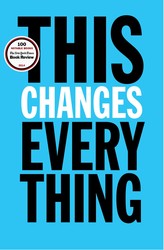 The most important book yet from the author of the international bestseller The Shock Doctrine, a brilliant explanation of why the climate crisis challenges us to abandon the core “free market” ideology of our time, restructure the global economy, and remake our political systems.In short, either we embrace radical change ourselves or radical changes will be visited upon our physical world. The status quo is no longer an option. In This Changes Everything Naomi Klein argues that climate change isn’t just another issue to be neatly filed between taxes and health care. It’s an alarm that calls us to fix an economic system that is already failing us in many ways.