Sloan Barnett, a Today show regular and the author of Green Goes With Everything: Simple Steps to a Healthier Life and a Cleaner Planet, evaluates diaper options for your baby.

Today, the average baby goes through some eight thousand diapers before being potty trained, a number that’s increasing steadily with the ease and convenience of disposable diapers. By some estimates, 95 percent of parents use plastic disposable diapers. They’re incredibly convenient. They work. As a working mom I’ve struggled with the Great Diaper Question since my first son was born. I like the ease of disposables as much as any parent, but I also want what’s safest for my children and the planet. After all, in those first years, diapers touch your baby’s skin even more than you do.

Despite their convenience, however, the plain fact is that according to the EPA, diapers account for 3.4 million tons of waste dumped into landfills every year. And no one knows how long it will take for these diapers to break down. Think of them as little bundles of infant poop wrapped up loosely in essentially indestructible packages. If that weren’t enough to make you stop and think, there is the matter of the chemicals used when these diapers are being made. Conventional disposable diapers are made of bleached paper fibers, sodium polyacrylate absorbent gels, plastics, and other materials I don’t want next to my baby’s skin. The chlorine used to bleach the paper fibers is bad enough, but the manufacturing process is also known to release dioxin, a probable carcinogen, as well as tributyltin (TBT), a biocide used in paper mills that is highly toxic to wildlife.

Cloth diapers, on the other hand, are made of cotton, and you can wash and reuse them over and over again before adding them to your rag pile. So this should be another no-brainer. But it isn’t that simple. Think of all the energy and water you use doing load after load of diapers. Think of the dollar value of your time while you’re doing all that wash. And think, too, of the environmental costs associated with growing the cotton (conventional cotton production is a massive user of fertilizers and pesticides) and producing and bleaching the cloth. As for diaper services, they’re almost nonexistent today, and those that are still in business use a lot of chlorine bleach to return the diapers to you looking like new.

So from the point of view of both cost and environmental effects, disposable and cotton diapers are, you’ll pardon the phrase, a wash. And that’s where the battle has stood for more than a decade: a choice between two evils. Now, however, there are a few better choices. First, cotton reusable diapers have come a long way, baby. They come stitched into the appropriate shape. They use Velcro or snaps instead of safety pins. And some of the new fabric diapers use certified organic, unbleached cotton. Others are microfleece made from recycled materials.

There are also new disposables that are less harmful to the environment—unbleached and made from paper raised in sustainable forestry operations. Some even have unbleached, biodegradable liners you can flush right down the toilet.

I’m a mom. Three times over. And I’ve learned that none of these alternatives is perfect for every situation. I’ve found that a combination of cloth diapers and greener, safer disposable diapers works best for me and for my baby. You might find, as my friends do, that the newly designed organic cloth diapers work best during the day, while the safer disposables are better at night. The message here is that we have better choices, and every good choice we make is a step forward, both for our children and the planet they will inherit.

Because of the increasing concern about the dangers of conventional disposable diapers, and even conventional cotton diapers, new, safer products are coming onto the market all the time. Here are just a few suggestions:

ABOUT THE AUTHOR
Sloan Barnett, author of Green Goes with Everything: Simple Steps to a Healthier Life and a Cleaner Planet (Copyright © 2008 by Sloan Barnett), is a regular contributor to NBC’s Today show and the Green Editor for KNTV, the NBC affiliate in San Francisco. She has been a television and print journalist for more than ten years, and wrote a popular consumer advice column for New York’s Daily News for nearly a decade. She lives in San Francisco with her husband and three children. For more information, please visit greengoeswitheverything.com.

MORE ARTICLES BY THE AUTHOR 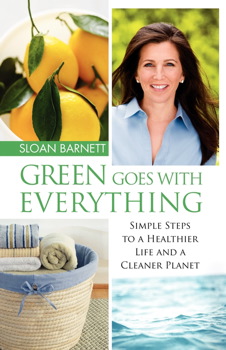 Green Goes with Everything: Simple Steps to a Healthier Life and a Cleaner Planet
by Sloan Barnett

Imagine if your best friend gave you vital information that could protect you and your family, and save you money, and help the planet. Imagine if you were given clear, simple choices, small changes that could have a big impact on your life. And you could still wear leather shoes and deodorant. You'd listen, right?

Well, think of Today show contributor Sloan Barnett as that friend. A mother of three, a dedicated consumer advocate, Sloan gives us a fast, simple, down-toearth primer on the ways our homes are making us sick, and what we can all do to transform them into the safe sanctuaries we want and need them to be.

Sloan exposes the toxic truth behind the household products we use every day -- from laundry detergent to toothpaste to lipstick. She explains how these and other seemingly benign stuff can harm us and our children. She offers an array of alternatives, and inspires us to see that we're never helpless: Every day, we have the power to make better, smarter, safer choices.

Packed with common sense and sass, product picks and practical tips, Green Goes With Everything is for everyone who wants to live a healthier life.