As Dr. Oz once warned in his book YOU: The Owner’s Manual for Teens, “Nail polish is likely the most toxic cosmetic there is.” But it’s also one of the most revered and most addictive. Pinterest boards are made of the fabulous hues and nail art that just came down the runway at New York Fashion Week. Gel manicures have soared in popularity, making it possible to go on a week-long vacation and still flaunt salon-fresh nails. Still, aren’t we forgetting how under all those pretty gloss patterns, a silent but powerful bed of toxins is seeping through our nail beds and into our bloodstream? Consider the source: your corner nail salon.

Nail salons are woefully underinspected for sanitary conditions and employee health. I remember holding my breath during my nightly walk past my neighborhood salon, which had overpowering fumes even outside the door, and wondering how anyone in there could breathe. Case in point: There are 2,000 nail salons in New York City, but only 27 inspectors, according to a report from public advocate Letitia James. A new city council proposal would mandate letter grades for nail salons, just as the city has for restaurants.

“Every single woman we work with” has a horror story about a botched mani/pedi, Bronx Borough President Ruben Diaz Jr. told the New York Daily News. “A five-borough system where we can give comfort to the consumer that the establishment they’re walking into is one that is safe; one where you speak of hygienics, it’s a place where they don’t worry about getting hepatitis, fungus, staph infections.”

My co-worker actually got a perinicular infection in her torn cuticle last year, and while her doctor said it could have come from anywhere, it did happen after a manicure (which could have worsened matters). Suddenly, a vein in her arm began turning red. Alarmed, she was sent to an infectious disease specialist, and had to take several courses of intense antibiotics. She also had to have surgery on the area to remove the diseased tissue. Needless to say, after that I started using a nifty little alpha hydroxy acid lotion I buy on Amazon called “Cuticle Eraser.”

Worse still are the chemicals in nail polishes, strengtheners, and removers. Some polishes contain up to 30 chemicals. Lest you think you’re not as bad off as the poor employee applying dozens of coats per day, think of this: They seep through your nail bed into your bloodstream. Known carcinogens like phthalates, formaldehyde, camphor, and acetone all place a heavy load on the liver, and your reproductive and respiratory health can be affected in the long term. If you’re a mother, don’t treat your daughter to a polish day at the salon, either. Growing children shouldn’t be exposed to these chemicals, especially since the FDA doesn’t monitor nail polishes and we have no idea of the long-term effects.

Look for non-toxic big 3-free, or better, 5-free nail polish brands like Zoya and RGB. They’re still chemicals, yes, but they’re a much better alternative if you must have stylish nails. I have several bottles of Zoya, as well as their polish remover, though I limit my polishes to once a month in the summertime. I stopped getting manicures altogether since my nails were brittle and peeling. They’ve benefited from a six-month-long break, with just a little coconut oil rubbed in for good measure.

Skip the gels altogether, too. At one of two gel appointments I’ve had in my life (for my wedding, so I took the chance), I sat next to a nail artist who was sniffling repeatedly while applying a crazy 3-D stone design to a client’s nails. She was wearing a mask and still had to get up to blow her nose and dry her eyes a half dozen times.  It really freaked me out. Whatever’s in that stuff, I don’t want it in my lungs or in my system. Not to mention, soaking your nails in a toxic stew of acetone and foil for several minutes to get it off isn’t good, either.

Try Honeybee Watercolors Nail Polish as an alternative; you can skip the nasty remover and take it off with VODKA. What’s not to love about that?!

Some other cheap tricks: Buy some organic coconut oil (a vat will set you back about $7-$10) and a good foot scraper tool you can keep in your shower. Those two items alone will save you a ton of money at the nail salon. Up your game with a pair of soft fuzzy socks and this incredible nighttime Body Butter Melt from Soapsmith. Your hands and feet will breathe a sigh of relief. 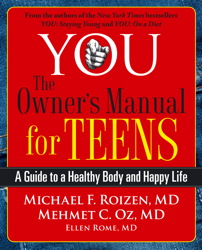 YOU: The Owner’s Manual for Teens
by Dr. Oz

A few years ago, we wrote YOU: The Owner’s Manual, which taught people about the inner workings of their bodies—and how to keep them running strong. But you know what? There’s a big difference between an adult’s body and your body, between adults’ health mysteries and your health mysteries, between their questions and your questions. So, teens, this book is for YOU.