It’s a universal human experience that all of us can think of some people who are just full of shit. But today, thanks to advances in the science of microbial ecology and DNA sequencing technology, we can find out exactly what kind of shit people are full of. In projects around the world, ranging from the $173 million NIH-funded Human Microbiome Project, to crowdsourced and crowdfunded efforts like American Gut, we are starting to understand exactly what microbes live in our feces and how they may shape who we are.

Here are some of the early conclusions from that work:

Vegans. High in Prevotella and other butyrate-producing microbes from eating whole grains and other fibers; lots of Oxalobacter if also eating spinach, chard, rhubarb, and other plants high in oxalate.

Atkins dieters. Lots of Bacteroides from the focus on meat; low Prevotella from the reduced grain content. Plenty of TMAO (trimethylamine oxide), which can lead to cardiovascular problems in some people.

College students. Highly variable microbiomes due to binges over the course of the week and the semester, lots of opposing factors with opposite effects on the microbiome. Alcohol increases microbial diversity in the gut while sleep deprivation decreases it; high-fat pizza at on-campus events is balanced by ascetic ramen the rest of the week.

The British. Distinctly different profile from Americans overall; they even get fat differently, with a bacterium called Christensenella associated in weight loss in skinny Brits, but not found at all in the American population.

Politicians. We don’t actually know, as none have yet signed up for microbiome sequencing to our knowledge, but we think a lot of people would love to find out exactly what kind of shit their local politicians are full of—especially the ones they voted against!

Dog Owners. People who have dogs actually share some microbes with those dogs, so if you think your dogs are full of shit, some of that shit might be in you, too. Owning a dog makes the microbiome of you and your partner more similar, implying that dogs are very good at spreading the shit around (even more so than young children, as it turns out).

Transplants. Some people have actually started to take the shit out of others and use it to improve their own shit! So called fecal microbiota transplants (FMT) have helped many people to overcome crippling illnesses, such as C. diff. infections, but some of our colleagues have been known to use African tribesmen as a donor for their own special FMT, transplanting Prevotella and Oxalobacter into their gut, which they reported reduced their farting significantly!

Athletes. These physically fit types tend to have special shit, but then they also tend to eat a very controlled diet and put their bodies under a lot of physical stress. It has been posited that the microbiome could influence behavior via feedback between the gut and the brain, is it possible that this is the reason athletes are so driven. It might be possible to take an FMT from an athlete to improve not just your athletic ability, but even your determination to win!

In any case, if you’re dying to know what kind of shit you’re full of, or if perhaps there’s a boss or co-worker or relative where you’ve been curious about that since you first met them, through projects like American Gut you can finally find out. Both of us have been astonished to find through our own research how full of shit we are, as many of our colleagues probably already suspected! 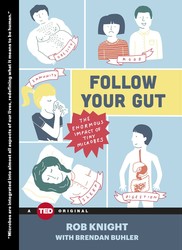 Follow Your Gut: The Enormous Impact of Tiny Microbes
by Rob Knight

Allergies, asthma, obesity, acne: these are just a few of the conditions that may be caused—and someday cured—by the microscopic life inside us. The key is to understand how this groundbreaking science influences your health, mood, and more.In just the last few years, scientists have shown how the microscopic life within our bodies— particularly within our intestines—has an astonishing impact on our lives. In Follow Your Gut, pioneering scientist Rob Knight pairs with award-winning science journalist Brendan Buhler to explain—with good humor and easy-to-grasp examples—why these new findings matter to everyone.