Grief is a part of life, so goes the old saying. But when you’re in the middle of it, whether it’s a result of losing a loved one or perhaps another kind of loss like a layoff or divorce, it is easy to feel alone. It can seem like no one has ever felt the way you do. The emptiness and physical pain are so intense that on the worst days, it can feel like it will never end.

The good news is, those dark days will one day be over. You will laugh again. After you make your journey through the grief, it will turn into something else, something that will give your world more meaning. Life will reveal itself to be more precious than you ever thought possible. You will be able to give back to other people in your life and help them with their rough times, knowing both the pain and beauty that lie ahead for them.

These books are meant to be guides on your journey, helpful for remembering that no matter what you feel in one dark moment, you are not alone.

A collection of talks she gave between 1987 and 1994, the book is a treasury of wisdom for going on living when we are overcome by pain and difficulties. The beautiful practicality of her teaching has made Pema Chödrön one of the most beloved of contemporary American spiritual authors among Buddhists and non-Buddhists alike.

H is for Hawk
by Helen Macdonald

When Helen Macdonald's father died suddenly on a London street, she was devastated. An experienced falconer—Helen had been captivated by hawks since childhood—she'd never before been tempted to train one of the most vicious predators, the goshawk. But in her grief, she saw that the goshawk's fierce and feral temperament mirrored her own. Resolving to purchase and raise the deadly creature as a means to cope with her loss, she adopted Mabel, and turned to the guidance of The Once and Future King author T.H. White's chronicle The Goshawk to begin her challenging endeavor. Projecting herself "in the hawk's wild mind to tame her" tested the limits of Macdonald's humanity and changed her life.

The Fault in Our Stars
by John Green

Despite the tumor-shrinking medical miracle that has bought her a few years, Hazel has never been anything but terminal, her final chapter inscribed upon diagnosis. But when a gorgeous plot twist named Augustus Waters suddenly appears at Cancer Kid Support Group, Hazel’s story is about to be completely rewritten. The Fault in Our Stars is award-winning-author John Green’s most ambitious and heartbreaking work yet, brilliantly exploring the funny, thrilling, and tragic business of being alive and in love.

Written after his wife's tragic death as a way of surviving the "mad midnight moment," A Grief Observed is C.S. Lewis's honest reflection on the fundamental issues of life, death, and faith in the midst of loss. This work contains his concise, genuine reflections on that period: "Nothing will shake a man -- or at any rate a man like me -- out of his merely verbal thinking and his merely notional beliefs. He has to be knocked silly before he comes to his senses. Only torture will bring out the truth. Only under torture does he discover it himself." This is a beautiful and unflinchingly honest record of how even a stalwart believer can lose all sense of meaning in the universe, and how he can gradually regain his bearings.

How To Go On Living When Someone You Love Dies
by Therese A. Rando

Mourning the death of a loved one is a process all of us will go through at one time or another. But wherever the death is sudden or anticipated, few of us are prepared for it or for the grief it brings. There is no right or wrong way to grieve; each person's response to loss will be different. In this compassionate, comprehensive guide, Therese A. Rando, Ph.D. leads you gently through the painful but necessary process of grieving and helps you find the best way for yourself.

Unforgettable: A Son, a Mother, and the Lessons of a Lifetime
by Scott Simon

When NPR's Scott Simon began tweeting from his mother's hospital room in July 2013, he didn't know that his missives would soon spread well beyond his 1.2 million Twitter followers. Squeezing the magnitude of his final days with her into 140-character updates, Simon's evocative and moving meditations spread virally. Over the course of a few days, Simon chronicled his mother's death and reminisced about her life, revealing her humor and strength, and celebrating familial love. Unforgettable expands on those famous tweets to create a memoir that is rich, deeply affecting, heart-wrenching, and exhilarating. 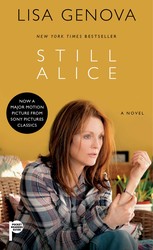 In Lisa Genova’s extraordinary New York Times bestselling novel, an accomplished professor diagnosed with Alzheimer’s disease learns that her worth is comprised of more than her ability to remember. Now a major motion picture from Sony Pictures Classics starring Julianne Moore, Alec Baldwin, Kate Bosworth, and Kristen Stewart! Look for Lisa Genova's next novel Inside the O’Briens.Alice Howland is proud of the life she worked so hard to build. At fifty years old, she’s a cognitive psychology professor at Harvard and a world-renowned expert in linguistics with a successful husband and three grown children. When she becomes increasingly disoriented and forgetful, a tragic diagnosis changes her life—and her relationship with her family and the world—forever.At once beautiful and terrifying, Still Alice is a moving and vivid depiction of life with early-onset Alzheimer’s disease that is as compelling as A Beautiful Mind and as unforgettable as Ordinary People. 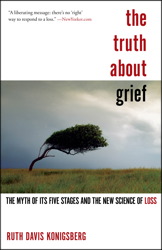 The Truth About Grief: The Myth of Its Five Stages and the New Science of Loss
by Ruth Davis Konigsberg

The five stages of grief are so deeply imbedded in our culture that no American can escape them. Every time we experience loss—a personal or national one—we hear them recited: denial, anger, bargaining, depression, and acceptance. The stages are invoked to explain everything from how we will recover from the death of a loved one to a sudden environmental catastrophe or to the trading away of a basketball star. But the stunning fact is that there is no validity to the stages that were proposed by psychiatrist Elisabeth Kübler-Ross more than forty years ago. In The Truth About Grief, Ruth Davis Konigsberg shows how the five stages were based on no science but nonetheless became national myth. She explains that current research paints a completely different picture of how we actually grieve. It turns out people are pretty well programmed to get over loss. Grieving should not be a strictly regimented process, she argues; nor is the best remedy for pain always to examine it or express it at great length. The strength of Konigsberg’s message is its liberating force: there is no manual to grieving; you can do it freestyle. In the course of clarifying our picture of grief, Konigsberg tells its history, revealing how social and cultural forces have shaped our approach to loss from the Gettysburg Address through 9/11. She examines how the American version of grief has spread to the rest of the world and contrasts it with the interpretations of other cultures—like the Chinese, who focus more on their bond with the deceased than on the emotional impact of bereavement. Konigsberg also offers a close look at Kübler-Ross herself: who she borrowed from to come up with her theory, and how she went from being a pioneering psychiatrist to a New Age healer who sought the guidance of two spirits named Salem and Pedro and declared that death did not exist. Deeply researched and provocative, The Truth About Grief draws on history, culture, and science to upend our country’s most entrenched beliefs about its most common experience.

The Hardest Peace: Expecting Grace in the Midst of Life’s Hard
by Kara Tippetts

Kara Tippetts knows the ordinary days of mothering four kids, the joy of watching her children grow ... and the devestating reality of stage-four cancer. In The Hardest Peace, Kara doesn't offer answers for when living is hard, but she asks us to join her in moving away from fear and control and toward peace and grace. 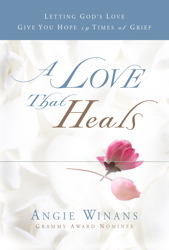 A Love that Heals
by Angie Winans

Everyone handles grief differently, but Angie outlines common principles that will help any grieving heart understand that the love of God provides true resolution. The same love that causes so much pain in loss is also the same love that can heal, so long as readers let it. Written from the heart of a Grammy Award-nominated singer and songwriter, Angie Winans, after the devastating loss of her brother Ronald, Angie's account of her personal journey provides a voice readers can identify with as they struggle through the difficult aftermath of death.