Not only is bottled water more expensive, costing more per gallon than gasoline, it’s loosely regulated by the FDA, and bottlers are virtually free to mislead consumers on the origins of their water. Get the facts from The Ripple Effect: The Fate of Freshwater in the Twenty-First Century.

Bottled water can cost between 240 and 10,000 times as much as tap water, the Natural Resources Defense Council (NRDC) found. Bottled water even costs more per gallon than gasoline, as Gustave Leven, the former chairman of Perrier, noted with satisfaction: “It struck me that all you had to do was take the water out of the ground and sell it for more than the price of wine, milk—or, for that matter, oil.”

A 2005 study by the World Wildlife Fund discovered that a $2.50 bottle of water shipped from a “pure European aquifer” is no healthier or tastier than water from a city faucet. While providers of public water, which are overseen by the EPA, are required to post the bacteriological and chemical content of their water, producers of bottled water—which is considered a “food product” and is overseen by the Food and Drug Administration—are not required to list such information on their labels. Many bottled waters have labels, but they list things such as “Zero grams of fat, cholesterol, sodium, carbohydrates, dietary fiber, sugars, protein, vitamin A, vitamin C, calcium, and iron.” This is not only meaningless and unhelpful, it’s confusing to the consumer.

In France or Italy, water is prized for what minerals are in it; in the United States, we prize water for what is not in it. All waters (except distilled water, which is not healthful to drink) contain some minerals, such as naturally occurring salts. Minerals give water its distinctive flavor. In Europe, each brand of “mineral water” proudly proclaims a specific taste, mineral content, laxative power, level of calcium (which helps strengthen bones), and so on. The FDA allows bottlers to say that an American springwater has “0 sodium,” which is not accurate. In an effort to feed their children the “purest” food available, some parents mix bottled water with infant formula, unaware that the high mineral content of certain bottled waters makes them unsuitable for infants, or the elderly.

The FDA also does not require bottlers to explain where the water comes from, how the water was purified, the results of water-quality testing, or where such information might be found. There is virtually no oversight of the design of water labels, which usually feature a misty grotto, a snowy peak, or a dense rain forest—images that conjure up pristine aquifers far removed from polluting civilization—when in fact the water is taken from municipal supplies, e.g., the taps of non-Alpine Los Angeles, New York, or Texas.

Questions about the purity and source of certain bottled waters have occasionally led to a loss of consumer confidence. In 1990, Perrier was found to contain excess benzene, which led to a costly and embarrassing recall. Other bottled waters have been found to contain mold, algae, glass, fecal coliforms, and—in Texas in 1994—crickets. In 2007, Pepsi was pilloried for identifying the source of Aquafina water as “P.W.S.”; now its labels explain that means “public water source”—aka tap water.

Most controversially, the definition of springwater has been modified numerous times. What is a spring? Technically, it is a water source that originates from underground and flows to the surface that is not directly influenced by rain or runoff. In 2003, Poland Spring faced a class-action suit alleging its water was not springwater but “treated groundwater,” a seeming splitting of hairs but an important legal and marketing distinction. Without admitting fault, Nestle agreed to settle the case with a $10 million payment to charity. 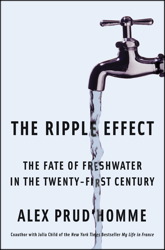 The Ripple Effect: The Fate of Fresh Water in the Twenty-First Century
by Alex Prud'homme

Will there be enough drinkable water to satisfy future demand? What is the state of our water infrastructure—both the pipes that bring us freshwater and the levees that keep it out? How secure is our water supply from natural disasters and terrorist attacks? Can we create new sources for our water supply through scientific innovation? Is water a right like air or a commodity like oil? Will the wars of the twenty-first century be fought over water?

Like Daniel Yergin’s classic The Prize: The Epic Quest for Oil, Money & Power, Prud’homme’s The Ripple Effect is a masterwork of investigation and dramatic narrative. Prud’homme introduces readers to an array of colorful, obsessive, brilliant—and sometimes shadowy— characters through whom these issues come alive. The Ripple Effect will change the way we think about the water we drink.