Although I’m not exactly old, I seem to be headed in that general direction. I was born in 1948, which brings up an important question: How much longer can I still pretend to be middle-aged?

Growing older was something that happened to my grandparents. Like so many of my fellow baby boomers, I thought our generation would remain forever young. Apparently we were misinformed. And now that I’m finally coming of age, I’m starting to experience some of the symptoms I’ve been hearing about for years, such as misplacing my car keys, forgetting names, and noticing various aches and pains that seem to have no rational explanation.

I’ve been vaguely aware that a growing number of the jokes that friends were telling me, or passing along over email, had to do with things like memory loss, Alzheimer’s, long marriages, or other concerns of older people. Even so, I wasn’t ready to acknowledge that any of this had much to do with me.

But all of these clues must have been loitering in my unconscious mind, because early in 2015 it suddenly occurred to me to compile a book of jokes about growing older. After all, I couldn’t be the only one who would appreciate a chance to laugh about the approach of sixty, seventy, or some other significant birthday. So I started looking for jokes on age-related topics, and when I finally had enough, I selected the best ones, along with some wonderful cartoons, for this book.

Remember jokes? A priest, a minister, and a rabbi walk into a bar. Three nuns meet Saint Peter at the Pearly Gates. Although comedians stopped telling them long ago, jokes are still around, and one purpose of this book is to make sure they stay around.

With a sensitive subject like aging, it may be worth pointing out that jokes just don’t portray the full scope of reality. They ignore a great deal that is true and reassuring because those things don’t happen to be funny. And the point of jokes and cartoons, and certainly the point of this book, is to make you laugh.

Laughter may not be the best medicine, but a growing body of research is showing that it has some real health benefits:
•It strengthens the immune system.
•It relaxes the body and reduces stress.
•It lowers blood pressure and increases blood flow.

Laughter also increases the ability to tolerate pain. This brings to mind Norman Cousins, longtime editor of the Saturday Review, who famously checked himself out of a hospital and into a hotel in the mid-1970s after being struck by an especially painful and life-threatening form of arthritis. After putting himself on a regimen of Marx Brothers and television sitcoms, Cousins described “the joyous discovery that ten minutes of genuine belly laughter had an anesthetic effect that would give me at least two hours of pain-free sleep.”

But wait—there’s more. Much like exercise, laughter expands the blood vessels and helps prevent cardiovascular disease.
•Some researchers think it may offset memory loss.
•It releases endorphins, which improve a person’s mood.
•Laughter promotes optimism, which in turn improves resiliency.
•It is also thought to stimulate learning, productivity, and problem solving.
•And according to a seven-year study of more than 50,000 Norwegians, older people with a sense of humor had a lower mortality rate than their counterparts who did not laugh easily at daily events. 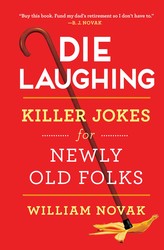 From the co-creator of the celebrated Big Book of Jewish Humor comes a laugh-out-loud collection of jokes about growing older that makes fun of memory loss, marriages, medicine, sex, the afterlife, and much more, making this the perfect gift for almost anyone who was born before you were. Growing older can be unsettling and surprising. (How on earth did this happen? Where did the years go?) So what better way to deal with this new stage of life than to laugh about your new reality? Die Laughing includes more than enough jokes (not to mention cartoons!) to let that laughter burst out. Whether it’s dealing with doctors, dating in one’s seventies, or unexpected bodily changes (not to mention funny noises), some things are easier to face with a smile of recognition. That’s why Die Laughing is the perfect gift for your parents, anyone celebrating a significant birthday, or any boomer with a sense of humor whose age begins with a six or higher.