Well, sort of. If you’re wondering why so many guys are sporting moustaches this month, they’re raising awareness for men’s health and prostate cancer as part of “Movember.” In Contagious: Why Things Catch On, author and Wharton professor Jonah Berger shares how this clever marketing strategy sprouted from a harmless competition among dudes.

Every year, cancer claims the lives of more than 4.2 million men worldwide. More than 6 million new cases are diagnosed each year. Thanks to generous donations, great headway has been made in research and treatment. But how can organizations that work to fight this disease leverage social influence to increase donations?

Unfortunately, as with many causes, whether you support a particular cancer fund is typically a private matter. If you’re like most people, you probably have little idea which of your neighbors, coworkers, or even friends have donated to help fight this disease. So there is no way for their behavior to influence yours or vice versa.

And that is where the moustaches come in.

It all started one Sunday afternoon in 2003. A group of friends from Melbourne, Australia, were sitting around drinking beers.

The conversation meandered in various directions and finally ended up on 1970s and 80s fashion. “What ever happened to the moustache?” one guy asked. A few beers more and they came up with a challenge: to see who could grow the best moustache. The word spread to their other friends, and eventually they had a small group of thirty people. All grew moustaches for the thirty days of November.

Everyone had so much fun that the next November they decided to do it again. But this time they decided to put a cause behind their efforts. Inspired by the work being done with breast cancer awareness, they wanted to do something similar for men’s health. So they formed the Movember Foundation and adopted the tagline “Changing the face of men’s health.” That year 450 guys raised $54,000 for the Prostate Cancer Foundation of Australia.

It grew from there. Next year there were more than 9,000 participants. The following year, more than 50,000. Soon the annual event started spreading around the world. In 2007, events were launched everywhere from Ireland and Denmark to South Africa and Taiwan. The organization has since raised more than $174 million worldwide. Not bad for a few tufts of facial hair.

Now, every November, men pledge to raise awareness and money by growing moustaches. The rules are simple. Start the first of the month with a clean-shaven face. For the rest of the month, grow and groom a moustache. Oh—and along the way, conduct yourself like a true country gentleman.

The Movember Foundation succeeded because they figured out how to make the private public. They figured out how to take support for an abstract cause—something not typically observable—and make it something that everyone can see. For the thirty days of November people who sport a moustache effectively become walking, talking billboards for the cause. As noted on Movember’s website,

Through their actions and words they [participants] raise awareness by prompting private and public conversations around the often-ignored issue of men’s health.

And start conversation it does. Seeing someone you know suddenly sprout a moustache generates discussion. People usually gossip a bit among themselves until someone gets up the courage to ask the wearer what prompted the new facial hair. And when he explains, he shares the social currency and generates new devotees. Each year I see more and more of my students sporting moustaches come November. Making the cause public helped it catch on more quickly than it ever could have otherwise. 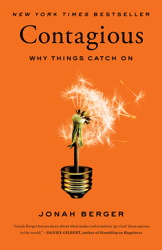 Contagious: Why Things Catch On
by Jonah Berger

New York Times bestsellerWhat makes things popular? If you said advertising, think again. People don’t listen to advertisements, they listen to their peers. But why do people talk about certain products and ideas more than others? Why are some stories and rumors more infectious? And what makes online content go viral? Wharton marketing professor Jonah Berger has spent the last decade answering these questions. He’s studied why New York Times articles make the paper’s own Most E-mailed List, why products get word of mouth, and how social influence shapes everything from the cars we buy to the clothes we wear to the names we give our children. In this book, Berger reveals the secret science behind word-of-mouth and social transmission. Discover how six basic principles drive all sorts of things to become contagious, from consumer products and policy initiatives to workplace rumors and YouTube videos. Contagious combines groundbreaking research with powerful stories. Learn how a luxury steakhouse found popularity through the lowly cheese-steak, why anti-drug commercials might have actually increased drug use, and why more than 200 million consumers shared a video about one of the seemingly most boring products there is: a blender. If you’ve wondered why certain stories get shared, e-mails get forwarded, or videos go viral, Contagious explains why, and shows how to leverage these concepts to craft contagious content. This book provides a set of specific, actionable techniques for helping information spread—for designing messages, advertisements, and information that people will share. Whether you’re a manager at a big company, a small business owner trying to boost awareness, a politician running for office, or a health official trying to get the word out, Contagious will show you how to make your product or idea catch on.