Breathing can actually increase physical strength, a practice commonly taught in martial arts. Inhaling and exhaling, slowly and with intention, releases stress and builds power. Check out how to do it yourself in Body Intelligence: Harness Your Body’s Energies for Your Best Life.

Several decades ago, I sat in my first martial arts class. My sensei (“teacher” in Japanese) was talking about energy. He told the class that the body is a vessel that can hold only a certain amount of energy. Our job, according to him, was to empty out the bad (or dysfunctional) energy and replenish it with the good. To help us understand what he meant, he taught us a simple breathing exercise. Dating back to the Shaolin monks in 525 AD, these breathing techniques are used to increase concentration and strength.

“First, relax,” my sensei said. “But not so much that you lose your concentration.”

He told the class to slowly breathe in through their noses and out through their mouths, releasing any stress and negativity they were feeling as they exhaled. This would not only increase our power of focus but our external strength. He told us to visualize our breath as vibrant, white light pulsating with energy. This would clean the body and mind of bad energy and increase the good energy.

My notion of martial arts up until then had been limited to a series of drills and movements that could be used for confidence building, self-defense, and de-stressing. But here was my instructor telling me that concentrating inwardly would increase not only my overall focus but my external strength. I was fascinated.

Sometime after my breathing lesson, I decided to test my sensei’s words. I had to stack several cords of wood in preparation for winter. It was an early autumn evening, and the sky was orangish gold, its dimming light flickering on the trees and moist ground in the woods. The air was crisp and cidery and sweetened with the scent of bonfires. I had set a goal of one cord for the night, but it had already been a long day, and I was tired.

With nearly half a cord to go, I humored myself and decided to try out my sensei’s breathing technique.

I relaxed. I regulated my breathing, as he had instructed, and visualized my mind and body blazing with vibrant and flowing energy. My labor transformed into a meditation of sorts—not that I thought of it that way; it just happened that way. I seemed to forget about my work, yet I worked spiritedly, continuing the breathing exercise as I went along. Rather than begrudging my work, I felt comforted by it. When I finished, instead of feeling my usual soreness and tiredness, I felt restored and animated. I felt energized and joyful. Not only had I done things with much less effort but I felt generally happy. This exercise caught my attention and marked my first step into a new way thinking and feeling. This would evolve over the years into a quest to understand more about how various energies affect the mind and body, and how they can enhance your experience of life. 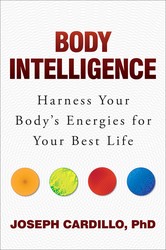 From the holistic psychology expert and author of the mind-body-spirit classic Be Like Water, comes a guide filled with revolutionary methods to help you find the physical and psychological energy you need to live a vibrant life. Packed with exercises, self-tests, and step-by-step instructions, Body Intelligence provides all the interactive tools for beginners and experienced energy-balancing practitioners alike to improve and understand the specific energy needed to live a happy, healthy, fulfilling life.